The Deathless Arm of Dan Donnelly; Or, You Never Know What Will Get You Into the History Books 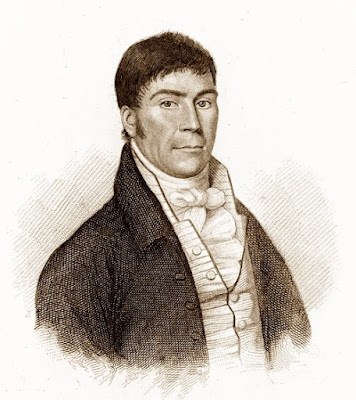 The 19th century boxer Dan Donnelly had a brief, but spectacular career.  Although he had trained as a carpenter, by the time he reached the age of 30, he was Ireland’s unbeaten heavyweight bare-knuckle champion.  The tall, muscular man (a contemporary dubbed him a “pocket Hercules”) was quite the successful brawler in his private moments, as well.  Many tales (of possibly less-than-unimpeachable veracity) were related about Donnelly using his formidable fists to teach bullies a lesson, and generally protecting those less able to defend themselves.  His defeats of renowned English boxers turned him into an Irish hero.  However, his skill as a fighter is not why he is still remembered today.

Donnelly’s boxing days came to an end on the frigid, rainy night of February 18, 1820.  The 31-year-old champion got roaring drunk in a Dublin pub, wobbled off towards home, and almost immediately collapsed.  By the time he was found the next morning, pneumonia had set in.  He died a few days later.  This fatal booze-up is also not why he is still remembered today.  The reason for the boxer’s lasting renown is all thanks to his right arm, which turned out to have a career more varied--and certainly far longer--than the rest of Donnelly put together. 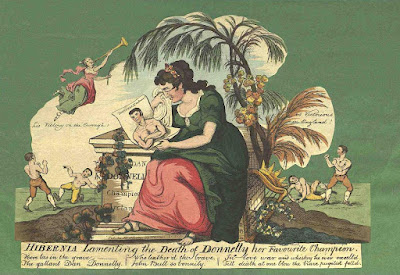 Donnelly was unfortunate enough to die during the Golden Age of body-snatchers--hard-hearted (not to mention strong-stomached) criminals who were happy to make a living robbing graves and delivering the corpses to surgeons in need of cadavers to dissect.  Not long after poor Dan was buried, visitors to his grave saw unmistakable evidence that the dearly departed was no longer resting in peace.

Donnelly’s corpse was soon traced to a surgeon named Hall, who swore (unconvincingly) that he had no idea he had been sold the body of a local folk legend, and he promised to immediately have the late fighter properly reburied.  Dr. Hall was true to his word.  Sort of.  Before the reinterment,  Hall just couldn’t resist amputating Donnelly’s right arm.  He wanted to dissect it to see if it would reveal the secrets of the boxer’s devastating punch.

After Hall had gazed at the arm to his heart’s content, he coated it with red lead paint, to act as a preservative.  Eventually, the limb somehow made its way to Scotland, where for the next 50 years, it was a teaching aid at Edinburgh University.  The arm was then sold to a traveling circus, where the sight of it entertained audiences throughout England.  In 1904, a Belfast pub owner bought the arm.  For most of the 20th century, this mummified portion of Dan Donnelly was the star exhibit in several Irish pubs.  (Considering how our hero met his end, perhaps the limb served as a sort of anti-drunk-driving message.)

When Jim Byrne, the last publican to own the arm, died, his pub was sold in 1997.  Byrne’s son, not knowing the limb’s storied history, consigned the gruesome relic to the basement in his mother’s home.  There it lay--just another forgotten knick-knack--for nearly a decade.  Then, an American relation of the boxer, Thomas Donnelly, launched a search for the arm.  When Byrne’s widow Josephine heard of the quest, she revealed its location.  However, she thought it disrespectful to ship a 200-year-old mummified arm in mere cargo class.  Happily, she was acquainted with an Aer Lingus pilot named Henry Donohoe, who readily agreed to take the relic into the cockpit with him on his next flight to the States.

As the 21st century dawned, the arm traveled to the Irish Arts Center in New York, where it took part in an exhibition paying tribute to Irish boxers.  It was also shown at the South Street Seaport Museum and Boston College.  In 2009, Dan’s astonishingly peripatetic limb was returned to Ireland, where it still makes public appearances.

Dan’s spirit probably initially resented the desecration of his corpse, but I’m betting he eventually realized that there’s no such thing as bad publicity.  After all, if the boxer's remains had been treated with the proper respect, you wouldn’t be reading about him right now, would you?

[Note: If you're curious, there are photos of The Arm available online, but I advise against looking for them, particularly if you want to eat a hearty lunch.  This last remaining bit of poor old Dan can't be said to have aged well.]