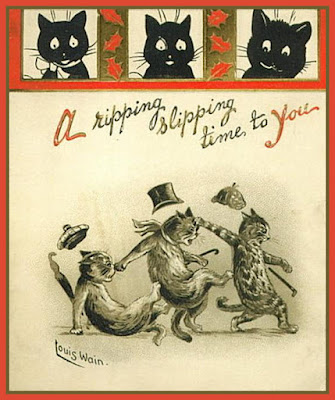 The old "I caught them in the act" murder excuse.

Put another way, here is a man who was a Presidential jinx.

How Maggie Cuddigan became the first woman to be lynched in Colorado.

A tale of a widow.

If you've ever browsed the Charley Project, you've undoubtedly noted the depressing number of missing-persons cases that say only "Little information is available."  Here is a particularly striking example.

Anyone care to wear a hat covered in decayed teeth?

Murder and a psychic experience.

Charlie Chaplin in the East End.

The women of the Napoleonic Wars.

A remarkable case of a kidnapped child finding his home many years later.

Martial punishment in the 18th century.

How the Elgin Marbles wound up in England.

The fogs of Old London.

In praise of tackiness.

The time Henry V had a bad Christmas.

Watching a supernova in real time.

Some sensible advise to a romantic 13-year-old.

The underrated art of courtroom sketching.

Why Henry VIII had a relatively simple tomb.

The daughters of Henry II and Eleanor of Aquitaine.

A dinosaur has been found in a reservoir.

The Midtown cat and the possum wrangler.

The Royal Navy Exhibition of 1891.

The grave of a dragon-slayer.

The horrors of "baby farms."

If you want to move to this town, you have to leave your appendix behind.

A brief history of potato chips.

A brief history of the word "washing."

The guy who used leeches as a weather report.

A remarkably well-preserved wooden figure from the ancient Roman era.

Meditation and the immune system.

When poltergeists go just too far for us.

That's it for this week!  See you on Monday, when we'll look at the many adventures of a boxer's arm.  In the meantime, it occurred to me that I've yet to share a song by the Beatles in this space, so here you go.  This is my favorite song of theirs.