The Ghosts in the Mist 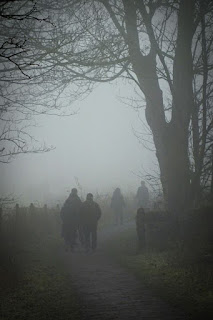 It is far from uncommon for multiple people to simultaneously see the same ghost.  However, accounts of multiple people simultaneously seeing the same multiple ghosts are fairly rare, which makes the following tale worthy of notice.  In fact, I’m not sure I’ve ever read a “true ghost story” quite like it.  It was first published in Sir Ernest Bennett’s “Apparitions and Haunted Houses” (1939), a collection of first-hand encounters with the supernatural.

Bennett prefaces the story by stating, “This strange account was received directly from the elder of the two ladies who witnessed the phenomenon; the younger sister has read it through and appended a brief comment to the account. The maid cannot now be traced.”

I daresay it is ten or twelve years since this happened. One night in November my sister C. and myself, with the maid, had been to evening service in our village church. There was thick fog; the moon was full, but it made a sort of steam in the fog, instead of shining brightly.

As we walked we met a man: he was whistling, and we heard his whistle and his footsteps long before we saw him; he passed us on C.’s side, whistling still. Shortly after he had gone, I was surprised to see another man at C.’s side, who had come there without making a sound; he was a much shorter man than the first. C. apparently did not see him; I was walking beside her, and I pulled her sleeve, whispering, ‘Let that man pass.’ C. was walking on the outside of the three, next the carriage road. As I spoke, the man disappeared--it seemed, into C.’s dress; neither C. nor the maid had seen him, and he had made no sound. In another moment we were all bewildered at the sight around us; men, women, children, and dogs, all were moving briskly about, some singly, others in groups, all without a sound; they appeared mist-like. There was a broad strip of grass on our right, and a narrow strip on our left; the figures were hidden directly they got on either of these dark strips, or when they passed into ourselves; but as we walked on they came from every quarter. Some seemed to rise out of the grass on either side of us; others seemed to pass through us, and come out on the other side. The figures all seemed short, dwarf-like, except one, of whom I write after. The women were dressed in by-gone fashion, high bonnets, big cloaks or shawls, and large flounces on their dresses, such as I remember my mother wearing when I was a child. We three were never mistaken as to the identity of the different shapes; if one saw a man, all saw a man; if one saw a woman, all saw the woman; and so on. Overhead it was perfectly free of them; they were all walking on the ground, as we ourselves were. We saw two men (at different intervals) that had sparks all round their faces; they appeared to grin. As we saw the second of these, looking hideous, close to us, one of my companions said, ‘I can’t pass that,’ and I answered, ‘Look at the sky, you don’t see them then.’

There was one man taller than all the rest (he looked very tall), who took great strides, though perfectly noiseless; he wore a kind of cape; he was the only one who walked beside us, and he was on the carriage road; the rest all went on in an aimless kind of way, losing themselves on the grass, and so on; but this one never changed his step or swerved.

As we walked on, and he kept near us, we cast frightened glances at him, and kept bidding each other in a whisper to look at him, though he never turned his head to look towards us. We approached our own gate, where we should turn in, and then we had a long drive to walk up before we should reach the house. I think that by the time we reached our gate all the figures had disappeared except this one tall man. He had quite a different look to any of the others, looked more horrible altogether. His way of walking was quite different to the rest, and he was, I should think, twice as tall or more than any of the others. He looked as if he had a purpose; the rest seemed quite different. As we had to cross the road and enter our gate, I thought I could not go if that horrible figure went too, but to our intense relief, he passed our gate, and went on with his measured stride up the middle of the road. As we turned into our gate, he was the only form in sight.

The only thing I do not recollect in this story is where E. says the men had a grin. All the rest is true. I cannot say I recollect the faces. The sparks I did see; the faces appeared to me, as did the figures, mist-like.

(1) (As to the distance actually traversed in company with the ‘spirits’.) After talking together and recalling the road, we think we may safely say we were among them for two hundred yards, or thereabouts. (So that the probable duration of the vision would be from two to three minutes.)

(2) As to the sparks around the two faces, I certainly think they were on the faces; they were around the faces, as it might be, on the edge of the faces; they were yellow sparks; the two figures who had the sparks appeared to me thin and cadaverous, for the faces did not look round, but seemed to fall in under the cheek bones. I wish I could draw, for I can see the ‘things’ now just as plainly as I saw them then, and I could point out the exact spot of ground on which they stood. We were close to them. As to the number of sparks I cannot speak definitely; they were placed at regular distances round the face; there might be about ten or twelve round each face, so I think. They appeared yellow and bright, and they made a slight steam in the fog. Their light was not nearly so beautiful as a star’s light (this last a suggested simile); it might be more like a small yellow candle’s flame. There was nothing beautiful about them.

(3) You ask whether I have any theory as to the apparition. I have none whatever, and should be extremely interested if anybody could throw light upon the matter. The style of the women’s dress seemed to take me back as far as I could remember (perhaps to 1857), when I seemed to remember my mother wearing the same sort of fashion, but as you know, fashions come and go, and repeat themselves a hundred times. I think the men chiefly wore capes or long cloaks; but you must remember, they all looked dark and mist-like…. I should be myself about twenty when I saw this appearance, and my sister sixteen…One might imagine it to be a kind of mirage, only the whole appearance was so unlike what one would have seen in any town at the time we saw it. No woman in any English town was dressed in the least as were all the women in our vision.

(4) We were all very much frightened. The maid and my sister were crying aloud; I was not, for I felt I must keep my wits about me; the tears were rolling down my cheeks in a kind of bewilderment, yet I was not crying, and my voice was strong and firm. We kept pulling each other from one and another side of the road, as the figures came thicker towards us from different sides, for it was an uncomfortable feeling to see them disappear into ourselves. When we burst into the house with the history of our curious apparition my father and mother came out with us again, to see if anything was to be seen, but the road was quite free of anything, and after walking about for half an hour we went indoors again.

Email ThisBlogThis!Share to TwitterShare to FacebookShare to Pinterest
Labels: ghosts