In Which Dr. Coolidge Settles a Debt

One of the most notorious crimes of 19th century America was the 1849 murder of Boston businessman John Parkman by Harvard Medical College lecturer George Webster.  The motive was that Webster, a man who spent far more than he earned, owed Parkman a great deal of money.  Murder was Webster’s way of cancelling the debt.  A similar, but far more obscure, killing took place just two years earlier.  And, coincidentally enough, the murderer was another medical man.

In 1847, a dashing young physician who bore the grand name of “Valorous Perry Coolidge” was one of the most notable residents of Waterville, Maine.  Our Dr. Coolidge was fond of the good life, and he spent money with a lavish hand, with the result that he soon owed a great deal of money to a great many people.  (Coolidge saw to it that each of his lenders was ignorant of the existence of the others.)

One of Coolidge’s patients was a wealthy cattle dealer named Edward Matthews (or Mathews.)  In September of 1847, Coolidge approached Matthews with a tantalizing offer:  if Matthews would lend him $1,500 for ten days, Matthews would earn $400 interest.   Matthews, apparently without stopping to wonder about the “too good to be true” aspects of the deal, agreed.  (Coolidge must have been either extraordinarily persuasive or extremely lucky in having a lot of very rich and very stupid friends.)

On September 30, Matthews withdrew $1,500 in cash from his bank.  At around 8 p.m., Matthews left a small party he had attended, commenting that he was on his way to Dr. Coolidge’s office.  He had no idea that Coolidge had already worked out an exquisitely simple plan for never having to return the money.

Not long after nine, Thomas Flint, a medical student who worked as Coolidge’s assistant, was walking home after a relaxing evening of playing backgammon.  As he passed Coolidge’s lodgings, the doctor emerged, asking Flint to accompany him to his office, which was next door.  When they arrived in the office, Coolidge locked the door and informed Flint that he was about to tell him a very important secret:  “That cursed little Ed Matthews came in here and went to take a glass of brandy and fell down dead; he now lies in the other room; I thumped him on the head to make people believe he was murdered.”  He followed up this interesting bit of news by asking Flint what they should do with the body.

Personally, if I arrived at work to find that the boss wanted me to dispose of a corpse, my response would be to immediately start checking the “Help wanted” ads.  Flint, however, was clearly of a more accommodating disposition.  He agreed to help move the body downstairs to the basement of a store run by one David Shorey.  The pair appeared to assume that when Matthews’ remains were inevitably discovered, they both could get away with assuming an air of angelic innocence.

The following morning, Mr. Shorey got a very unpleasant surprise when he went into his basement.  The body was moved to a nearby boarding house for a post-mortem.  One of the three physicians conducting the autopsy was Dr. Valorous P. Coolidge, which must have pleased him immensely.  During the examination, Coolidge removed Matthews’ stomach, which smelled very strongly of brandy.  He put the stomach in a basin, and advised Cyrus Williams, the owner of the boarding house, to dispose of the reeking organ.  Instead, Williams wisely locked it up in his icehouse.  The following day, one Professor Loomis tested the contents of the stomach, and found that along with the brandy, Matthews had swallowed a great deal of prussic acid.

The inquest into Matthews’ death soon began looking at one person: the one person who had the means, the motive, and the opportunity to poison the victim.  As the result of what a Waterville paper enigmatically described as “strange facts” that had been presented to the coroner’s jury,  Coolidge was indicted for murder on October 7.  (Coolidge’s fervent pleas of innocence lost further credibility when Matthews’ gold watch was found hidden in the doctor’s sleigh.)

Coolidge’s trial took place between March 14 and March 22, 1848.  You may be surprised to learn that the good doctor’s insistence that Matthews had walked into his office carrying a very large sum of money just so he could poison himself failed to persuade the jury.  The star witness for the prosecution was Thomas Flint, who finally--at the urging of his father--described the defendant’s efforts to make him an accessory after the fact.  The jury had no difficult finding Coolidge guilty of murder in the first degree.  At that time, Maine law required that prisoners on death row remain in jail for at least one year before they were hanged, in case any exonerating evidence was discovered. 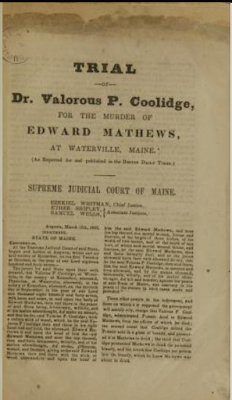 Coolidge was not idle during his twelve-month reprieve.  He appealed to the Governor for a pardon, which was refused.  However, in February 1849, the state council decided that this cold-blooded poisoner deserved to have his sentence commuted to life imprisonment.  Coolidge faced spending the rest of his days doing hard labor and living in solitary confinement.

In reality, Coolidge found that his sentence was not quite as harsh as he had expected.  The prison warden sometimes allowed him out in the yard, and his duties were relatively light.  However, our hero was not happy with the situation.  He put the entire blame for his imprisonment not on himself, but on Thomas Flint, his former assistant who showed such a deplorable inability to keep a secret.  Like Mary Stuart after the murder of Rizzio, Coolidge studied revenge.

In May 1849, Coolidge wrote a series of letters to a fellow prisoner who was about to be released.  To make a rather long and complicated story short, Coolidge recruited the man to make Flint’s acquaintance, and then poison him with prussic acid in a fashion designed to make it seem like Flint killed himself out of remorse for betraying his good friend, the spotlessly innocent Valorous Coolidge.  He even forged a “suicide note” where Flint confesses to Matthews’ murder.

Our Valorous, while certainly inventive, was not a subtle man.

Unfortunately for him, Coolidge never considered the possibility of these letters falling into the hands of the prison warden.  After the warden had himself a good read, he sent Coolidge back to solitary confinement and released the letters to journalists, all of whom thanked God for Valorous Coolidge, an unending source of entertainment.  The little murder plot earned Coolidge nationwide fame.

His new celebrity status did not please Coolidge.  The knowledge that everyone in America knew he was a homicidal dirtbag--and someone who was not even very good at it--left him “unwell and low spirited.”  On May 17, 1849, he told the prison doctor that he no longer wished to live.  Right on cue, the very next morning, Coolidge was found in his cell with his head in a bucket.  He died as a result of taking prussic acid that had somehow been smuggled to him.

Well.  That’s the end of that particular story, you say.

When Valorous’ father claimed the body for burial, he insisted that it was of a stranger.  He claimed that Valorous was smaller than the corpse, and that his son had lost part of a thumb in childhood.  He pointed out that the corpse’s thumbs were both intact.  For some weeks, the newspapers engaged in a lively debate over whether or not Valorous P. Coolidge was indeed well and truly dead.  Then, in December 1849, a man who had known Coolidge well wrote a letter which appeared in various newspapers and magazines.  He swore that he had seen Coolidge in Short Bar, California, going by the name of Wilkins.  “He appeared well, but in no other way altered, save that he was meanly dressed, and looked a little harder than usual.”  The next morning, “Wilkins” had left the town.  “Where he has wandered I cannot guess.”

Did Valorous Coolidge meet his end in his little prison cell?  Or did he somehow manage to use his undeniable creative talents to take on a new name and a new life?

We’ll never know, will we?