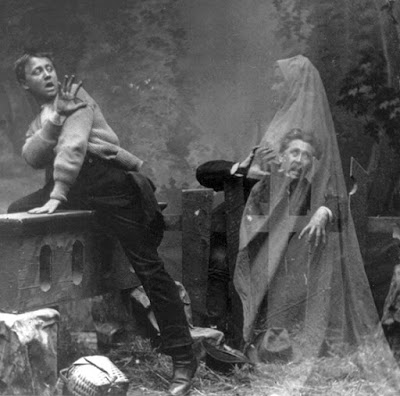 An old castle out in the middle of nowhere. Two Napoleon-era soldiers who are its reluctant houseguests. Then, strange and inexplicable things begin to happen...

It sounds like the classic setting for a Gothic novel. In this case, however, we are dealing with real life.

The starting point for our story is October 1806, when the Prussians were defeated by the French in the battle of Jena. Among the prisoners of war was one Prince Friedrich Hohenlohe. One of the Prince's councilors, Augustus Hahn, was more fortunate: the French granted him parole. Hohenlohe asked Hahn to take over the management of his main residence, Castle Slawensik in Upper Silesia, until he obtained his release from Napoleon's custody.

Despite his natural desire to return to his own home, Hahn loyally agreed. He would take with him his personal servant, John Reich, two coachmen, and the castle's housekeeper, Frau Knittel. To stave off the loneliness of his temporary exile, Hahn persuaded an old friend, Karl Kern, to accompany him. The little group settled in at Slawensik on November 19, 1806. Both men had a contemptuous skepticism towards anything that smacked of the supernatural. Hahn, in particular, was proud to describe himself as a thoroughgoing materialist.

Nothing unusual was noted until the third night after their arrival. As Hahn and Kern sat reading in a room on the first floor, they were suddenly pelted with bits of plaster. At first, the two startled men assumed the ancient ceiling was beginning to crumble. Then they noted that there were no cracks or any other signs of weakness on the ceiling. It looked perfectly sound. As they examined the apparently pristine surface, another shower of lime fell on them. Kern noticed that the pieces felt oddly cold to the touch.

The next morning, the men were disconcerted to find that the room was now thickly carpeted by fragments of plaster. And the ceiling was still completely uncracked.

That evening, the mystery took an even more alarming turn. The bits of lime began not merely falling, but flying across the room, hitting the two men as if they were guided missiles. As Hahn and Kern fled, they heard rapping noises following them down the dark, ancient halls.

The two soldiers were beginning to think that there were worse fates than being captured by Napoleon.

Kern accused Hahn of pulling some deranged practical joke on him. He had to abandon that relatively comforting theory when a series of earth-shaking knocks were heard at a time when Hahn clearly could not have made the sounds.

When the eerie noises continued on their fifth night at the castle, Kern and Frau Knittel's son made a painstaking search of the upper floors of the castle. The rooms were all completely empty. Later that night, the men were awakened by the sound of slippered footsteps moving across their room. These sounds were then joined by the sound of a walking stick being tapped on the floor.

The ghost--for by this time everyone had to admit this was what they were facing--expanded its repertoire. Candlesticks were thrown across rooms. When the household sat at the dining table, their dishes would suddenly be tossed about by invisible hands. Other household objects would, before their eyes, levitate and dance in the air.

After three weeks of this uproar, Hahn and Kern had their belongings moved to an upper room. This helped them about as much as you think it would. In the middle of the night, Hahn was awakened by the sound of Kern whimpering. He saw Kern staring into a mirror, pale and shaking with fear. When Kern had recovered from his shock enough to speak, he said that he had seen reflected in the mirror the image of an old woman in white robes. Her face was calm and unthreatening, but the sight nevertheless filled him with horror. In the morning, the men had their things moved back downstairs.

Word spread through the area that there were some very odd things happening at Castle Slawensik. Two Bavarian officers, Lieutenant Nagerle and Captain Cornet, came by to investigate. These soldiers were determined skeptics, eager to expose the "truth" behind these allegedly spectral manifestations. Nagerle obtained permission to spend the night in the "haunted" room.

Nagerle had not been in the room for more than a few minutes when the others heard him cursing loudly. This was followed by banging noises. When they reentered the room, they saw Nagerle whacking away at tables and chairs with his saber, angrily battling some invisible foe. He explained indignantly that the minute he was left alone, "something" began pelting him with lime. Hahn and Kern had a very difficult time persuading the outraged officer that they were not pranking him. As the four men were talking, candlesticks abruptly rose in the air and fell to the ground. A lead ball hit Hahn on the forehead. A glass shattered itself on the floor. The men heard footsteps marching through the room.

Nagerle was forced to concede defeat.

The goings-on at Slawensik became increasingly varied. One day after Hahn had heated some water for shaving, before his eyes the liquid was mysteriously sucked out of the basin and vanished. On another occasion, a visitor found that his hat had disappeared. While the household was looking for it, the hat suddenly floated in the air before its owner's face. When he grabbed at it, the hat jerked away and mockingly sailed around the room before dropping at his feet.

One night, Hahn decided that he had enough. Before going to bed, he addressed the ghost, demanding that he be allowed to have one night of peaceful sleep. No sooner had he dropped into a deep slumber that a quantity of cold water was dumped on his head.

Probably the strangest event took place while Hahn was away from the castle for a few days to attend to some business. In his absence, Kern--who did not at all relish the thought of facing the ghost alone--persuaded Hahn's servant John Reich to spend the night in his "haunted" room. After they had retired to bed, the pair saw a jug of beer rise from the table and pour the contents into a glass. Then, the tumbler was raised in the air and emptied. "Oh, Lord," Reich shuddered. "It is swallowing it!"

After a moment, the now-empty glass was replaced on the table. The men examined the floor. The beer had disappeared.

This left the men more unnerved than anything that had previously taken place. If the ghost--or whatever it was--could drink beer, what else might it do?

One evening, as Hahn was walking towards the castle, he heard a dog walking behind him. Assuming it was their greyhound, Flora, Hahn turned and called to the animal. He saw nothing. As he kept walking, the sounds of the footpads continued to, well, dog him. Even inside the castle, he heard a large dog trailing after him.

Kern approached him, calling Flora's name. He too had heard what he assumed was the greyhound coming up the stairs after Hahn. The two went in search of the dog. They finally found Flora securely locked up in the stables. The coachmen told them that the dog had not running loose at any time of the day.

For whatever reason, this ghostly dog proved to be the final eerie manifestation at Slawensik. The two officers stayed at the castle without incident for six more months, when Prince Hohenlohe was released from captivity. Hahn, who had been keeping a detailed diary of his strange experiences, ended the manuscript by concluding, "I have described these events exactly as I heard and saw them; from beginning to end I observed them with the most entire self-possession. I never felt fear; nor an approach to it; yet the whole thing remains to me perfectly inexplicable."

No one ever offered an explanation for the "perfectly inexplicable" events at Slawensik. The only possible clue emerged in 1831, when the castle was destroyed by fire. It was said that the skeleton of a man, who had evidently been walled up in some secret room, was discovered in the ruins. There was a sword by his side, and his skull had been split open.
Posted by Undine at 4:36 AM