Novels and movies about vengeful spirits angered over their last living wishes being ignored are so commonplace, you would think everyone would be aware of the danger, but some people just can't be told. The "Frankfort Daily Review," July 20, 1909:


Sterling, Ill. Friends and neighbors throughout Whiteside county are discussing in awestruck whispers the strange events associated with the burial of Mrs. Emma Stelzer, who vowed in a death message that unless her funeral was conducted from the house of the man she loved she would send her spirit to haunt him and to vex him for the remainder of his life.

Mrs. Stelzer killed herself by taking strychnine. She left a note saying that she loved Jacob Warner, a farmer, and that she wished her funeral to take place from his home. She also commanded Warner to see that her divorced husband did not witness the burial.

Warner scoffed at the strange threats. He said he never loved Mrs. Stelzer and that he would have nothing to do with her funeral. News of the woman's threat and the man's defiance spread over the countryside. and there was intense interest in the plans for the funeral.

Mrs. Stelzer's body was taken from the morgue, where it had lain since Warner refused to admit it to his home, and was carried out to the cemetery at the head of a long cortege of carriages, containing friends, neighbors, and many who were drawn by curiosity. The pastor had scarcely begun to read the burial service when the earth around the open grave caved in. 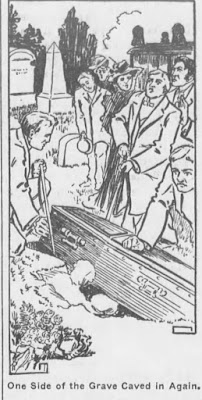 There was none in the funeral assemblage that believed the woman's threat had been anything more than the distracted message of a troubled woman, but all those present were visibly impressed by the two accidents.

Warner, who laughed at the threat that her spirit would return to haunt him all his life, keeps up his air of bravado. But he has noticeably grown pale and is failing in health, and friends who saw him the other day said he was a sick man. They attribute it to his brooding over Mrs. Stelzer's vow.

I have no idea what became of Warner, but I think it's safe to say that Emma was not a woman to be trifled with. Alive or dead.
Posted by Undine at 4:36 AM