The Case of the Woodworked Wife

Tolstoy famously wrote that all happy families are alike. He could only say that because he never met the Bennetts of Fort Bragg, California, a crowd that was happy in a manner unlike any other family in the world.

William Bennett was born in Pennsylvania in 1862. He became an electrical engineer, and, by the early 1900s, he was the operator of Fort Bragg's electrical plant. He was good at his well-paying job, and was liked and respected by everyone in town. However, he was lonely. As a young man, he had been deeply in love, but the girl callously threw him over for another man. The experience so wounded him that he left his hometown and fled out West. His faith in women had been so destroyed that he refused to even try to find another sweetheart.

Unfortunately, his bachelor existence did not please him, either. As afraid as he was of romance, he missed the company of a wife and children. Bennett tried consoling himself by building a house. It was a charming and spacious eight-room dwelling with a flower garden, pets, and plenty of comfortable furniture. However, this ideal family home only emphasized his longing for the ideal family to go with it.

What to do? As he brooded on the problem one day, the solution suddenly came to him. Since his chances of finding the perfect wife and children were remote, why not simply create them?

So Bennett got himself a life-sized block of wood, and carved the woman of his dreams. When he felt he had achieved his ideal of lumber loveliness, he dressed his bride in fine clothes and installed her in the parlor. In due time, the happy couple became the proud parents of a flock of wooden children--five girls and at least one boy. (This was one case where the children could quite literally be called chips off the old block.)

At first, Bennett's neighbors were a bit unnerved by his unconventional approach to family planning, but being a tolerant, live-and-let-live bunch, they soon became accustomed to his household. The ladies of Fort Bragg even began making social calls to the new Mrs. Bennett, and they found these visits unexpectedly delightful. After all, she was always at home, never too busy to welcome visitors, and no one could say she was overly chatty or prone to spread gossip. If you confided your deepest secrets to Mrs. Bennett, you knew she would remain as silent as the tomb. The daughters held receptions, which were attended by the local elite. A contemporary paper boasted, "the sons are well-behaved young fellows, and nothing has ever been said against their habits in any way." 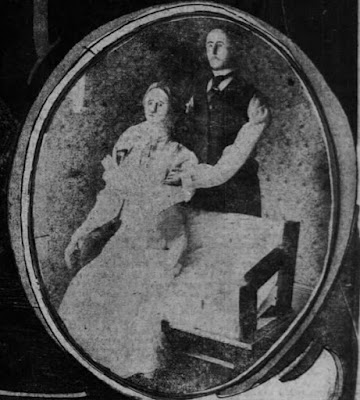 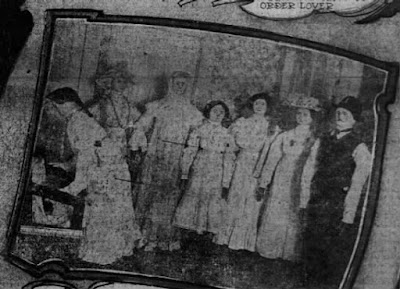 One day, an itinerant life insurance salesman came to Fort Bragg in search of possible customers. Some resident who obviously possessed a strong sense of humor pointed him in Bennett's direction. The salesman tracked Bennett down and gave him the standard spiel, pointing in particular to the advantages an insurance policy would hold for his family.

"That's just it," said Bennett. "I don't know what my wife would say."

The salesman decided the thing to do was to give his pitch directly to Bennett's spouse. Accordingly, the next day he presented himself at the Bennett residence. The man of the house amicably welcomed him inside, inviting him to step into the kitchen. The agent noticed a woman standing at the sink, apparently washing dishes.

Mrs. Bennett did not respond.

The salesman looked at her more closely. He noticed that the head that rose above the blue calico dress was...a block of wood.

"My wife," said Bennett cheerily. "She is as you see, but she's a splendid wife. Never worries me about household troubles or bills; never is late to meals; never quarrels. Isn't she a good deal better than some of those you know?"

The normally fast-talking agent found himself at a loss for words.

Like any good host, Bennett took his guest around to meet the family. In one of the bedrooms, daintily decorated pink, the agent was introduced to a daughter of the house. She was leaning over her bed, as if she were in the process of making it. In the sunny, cheerful sitting room, another girl sat at a sewing machine, while another, smaller girl stood in front of it. A third room was, judging from the furnishings and the photographs on the walls, that of a teenage boy. The agent noticed two more female figures relaxing in the parlor.

"It's..." the agent paused, trying to find a way to express his feelings. "It's peculiar, isn't it?"

"Perhaps," Bennett shrugged. "But think of the advantages. My son never stays out nights, never smokes or gambles; my daughters can never go wrong. They have everything that other children have. I see to that. Jane got a gold watch on her last birthday, and Annie a cameo pin on hers. My wife has a topaz brooch and the boy has all the scarfs and pins he needs. I'm always sure of peace and quiet in my home, and yet I like company when I eat. My family take all their meals with me and it's a good deal better than being alone."

A family of wood might not be for everyone, but by all accounts Bennett was thoroughly and genuinely contented. (Presumably the wife and kids were happy, too, but they were shy about giving interviews.) As the "New York Herald" enthused in 1907, "The daughters can never elope, for their father has only to chop them into kindling wood if they become refractory in such matters, and as for the sons, if they refuse to follow their father's footsteps he has only to put them into the stove and they will help make the house comfortable." Like any good patriarch, Bennett spent all his spare time seeing to his brood's needs. He could often be found in the local stores, carefully examining dress patterns and materials for his daughters, household items for his wife, sporting goods for his son and heir. For Christmas, birthdays, and anniversaries he patronized the jewelers. The candy stores knew him well.

The daughters were very fond of sweets, you see.

Christmas of 1905 was a particularly festive affair, as the family was celebrating a new member of the household: just two months earlier, Bennett's eldest daughter got married, to a young man who was as fine and handsome a block of wood as any young lady could ask for. Although no outsiders had been invited to the wedding, it was apparently a lavish ceremony, with the bride bedecked in an elegant gown and an extensive feast afterward.

Bennett invited his nearest neighbors for Christmas dinner. They all came, attired in their best clothes, and sat at the holiday table with Mrs. Bennett, daughter Jane and her new husband, and the other young Bennetts. An excellent time was had by all.

In the words of the "New York Herald" reporter, "Mr. Bennett is not an insane man by any means, but knows exactly what he is doing and why he is doing it."

In case any genealogists are wondering what became of Bennett's family, in his old age and nearing death, he feared leaving them alone. He knew that no one would love and care for his wooden wife and children the way he did.