The Doctor and the Deadly House Call 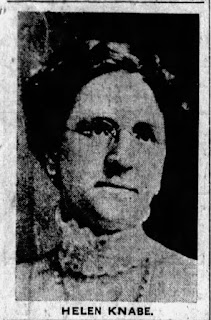 Helen (or Helene) Knabe's life was remarkable, in the best sense of the word. Unfortunately, her death was also remarkable, but in the worst possible way.

Knabe was born in 1875, in Rugenwald, an area by the Baltic Sea that is now the Polish city of Darlowo. She grew up bright, fiercely ambitious, and determined to become a doctor. Feeling that her native land offered her few opportunities to follow her chosen profession, she decided to move to America. Her destination was Indianapolis, Indiana, where several relatives had already emigrated. Upon her arrival, she found work in the household of an Indianapolis doctor, acting as cook and general housemaid. She learned English, and through sheer hard work and self-denial, saved enough money to enter the Medical College of Indiana.

Knabe proved to have a great natural aptitude for medical research--so much so that by the time she graduated in 1904, she had become an instructor at the college. She eventually became the state board of health's assistant pathologist, then Indiana's very first official bacteriologist--an incredible career trajectory for a woman of her day, and a solid tribute to her skill and discipline. She was a recognized expert in rabies and sexually transmitted diseases. In 1908, she resigned in order to open her own medical practice, which was an immediate success. By the time Knabe was thirty-five, she was personal physician to many of Indianapolis' elite. She had an unblemished reputation, and was highly and justifiably respected; the ideal example of a "self-made woman."

So the obvious question is: Why would anyone want to murder her?

On the morning of October 24, 1911, Katherine McPherson, Knabe's assistant, entered the doctor's apartment house (which also served as her office.) The front doors had been locked from the inside, and everything in the outer rooms seemed completely normal. However, Knabe herself seemed to be absent. The puzzled McPherson searched the apartment for her employer.

The mystery of Knabe's silence was quickly solved when McPherson entered the doctor's bedroom, and found her dead body. The corpse lay on a blood-soaked bed. It was immediately obvious that this was a murder, and a particularly brutal one.

Unfortunately for the course of the investigation, McPherson completely lost her head. Instead of immediately phoning the police, she summoned some of Knabe's friends and relatives to gawk at the horrid sight and generally do a splendid job of contaminating the crime scene and wasting valuable time.

When the police finally arrived--more than an hour after McPherson's initial discovery--they found that someone had cut Knabe's throat so viciously that she was nearly decapitated. As the body was wearing a nightdress, it was presumed she had been attacked while she slept, probably very quickly and efficiently. (Incidentally, there were no signs that she had been sexually assaulted.) Only one item was missing from the apartment: an instrument called a microtome, which was used to cut extremely thin sections of material for microscopic examination. It was presumed that this had been the murder weapon.

Investigators soon realized they faced a twin mystery: the question not only of who had murdered Knabe, but how the crime had been committed. All the doors and windows were locked from inside, with the exception of the windows in Knabe's bedroom. These were open, but securely covered by screens. The outside windowsills were coated with a thick layer of dust, indicating that the murderer had not entered or exited through them. It was thought Knabe must have let her killer into the apartment, although no one was able to say who this person might have been, or why the doctor would admit this person into her apartment in the middle of the night.

This inability to satisfactorily explain how anyone could have gotten into, then out of, Knabe's apartment, coupled with the lack of any evident motive for murder, led William Holtz, the chief of detectives, to argue that the doctor had not been killed at all: she had committed suicide. He pointed to the fact that Knabe's launching of a private practice had left her heavily in debt, something that had worried the normally financially prudent doctor. Working against this theory was the fact that the knife used to slash Knabe's throat was never found. It was pointed out that even the most determined suicide would have trouble nearly cutting off their own head and then disposing of the weapon. The body also had a defensive wound in one forearm.

Two days after Knabe's death, police received their first lead: a man named Joseph Carr told them that on the night Knabe died, he had walked past her apartment at about 1 a.m. He heard two screams, which were followed by a man exiting the alley behind the building and running up the sidewalk. When this man realized he had been seen, he quickly covered his face with a handkerchief and dashed off. Carr thought the man was about forty years old, and was dressed in a dark suit. Another witness came forward to state that around 8 p.m. on that fatal night, a man who fit the description of the one encountered by Carr asked him for directions to Knabe's apartment building. A woman who lived near Knabe stated that at the same time Carr saw this mystery man, she heard someone running past her house.

The particularly baffling circumstances of Knabe's death proved to be an excellent breeding ground for increasingly crackpot theories. Some stubbornly clung to the suicide scenario. A letter of Knabe's where she discussed her interest in Buddhism caused others to mutter of crazed Buddhist death squads. My favorite suggestion came from another female physician, Dr. Carrie Gregory. Gregory stated that one of Knabe's female patients had been suffering from "an ailment that was drying up the blood." Knabe opted to treat this woman by transfusing the patient with two quarts of blood from the Knabe's own body. Sadly, this novel treatment wound up killing the doctor. In order to cover up this embarrassing turn of events, Knabe's fellow physicians simulated a murder by slashing her throat and smuggled the body into her apartment.

I do not know how successful Dr. Gregory was in her chosen profession, but she would have wowed them as a Gothic novelist.

Knabe's murder soon went into the police's "cold case" files, and it remained there, getting chillier by the day. The Indianapolis chapter of the Council of Women hired a private detective named Harry Webster to look into the mystery, but he seemed to have as little success as the police. Then, in March 1912, a sailor named Seth Nichols was arrested for public drunkenness in Portsmouth, New Hampshire. Before Nichols had a chance to sober up, he told police that a man he only knew as "Knight," had paid him $1,500 to murder Dr. Knabe. However, it soon became disappointingly evident that Nichols' story simply did not stand up under examination. When records proved that Nichols had been on board his ship the night Knabe died, authorities quickly lost interest in him. Nothing more was heard of the mystery until December 1912, when a grand jury was convened to debate the question of just how Dr. Knabe died. During this hearing, a vital piece of evidence was presented that had, inexplicably, been ignored until that time: a bloody handprint had been found on Knabe's pillow. Harry Webster also presented his findings. The result of all this was that the grand jury returned two indictments in Knabe's death: Dr. William Craig, president of the Indiana Veterinary College, was charged with murder, with an undertaker named Alonzo Ragsdale being named as Craig's accessory.

Craig and Dr. Knabe had been "an item" since soon after they first met in 1908. However, shortly before Knabe's death, their romance had hit a rocky patch, evidently over Craig's assumption that she would give up her career after they married. According to some of their acquaintances, Craig had decided to break off their relationship--in fact, he was seeing another woman. Knabe, it was suggested, was not going to take the breakup quietly, thus giving Craig a motive for murder. A man named Harry Haskett claimed that he had seen Craig leaving Knabe's apartment building around 11 p.m. on the night Knabe died. (Of course, if you wish to pin the murder on Craig, this testimony clashes with the other witnesses who allegedly saw a man fleeing the scene two hours later.) One Dr. Eva Templeton stated that Craig's housekeeper told her that on the night of the murder, Craig arrived home late and had immediately changed his clothes. (Curiously, it is not clear if the housekeeper herself ever verified Templeton's story.)

As for Alonzo Ragsdale, he had been the administrator of Knabe's estate. Found in his possession was a kimono that had belonged to the dead woman. Tests showed that it had been bloodstained, then washed in "a strong chemical solution." The assumption was that he had helpfully removed this bit of evidence, as a favor to Craig. (It was never explained why Ragsdale would keep such a massively self-incriminating item.) For his part, Ragsdale said that he had a number of Knabe's more unimportant possessions, and there was no evidence that this kimono was even in Knabe's apartment at the time of her death.

Craig stood trial in November 1912. When Harry Haskett was put under oath, he suddenly became much less certain that he had seen Craig leaving Knabe's apartment. Several of Knabe's neighbors testified to hearing screams around midnight--one hour after this alleged sighting of Craig. In short, the prosecution so signally failed to present any evidence that Craig was the murderer that on December 9, the judge instructed the jury to dismiss the case. Accordingly, the charges against Ragsdale were also dropped.

The ignominious failure of the case against Craig was the end of any formal investigation into Helen Knabe's death. The question of who murdered the pioneering female doctor, and why, will almost certainly remain unknown. Indianapolis psychics and leaders of "ghost tours" insist that Knabe's spirit still haunts the city. If such is the case, the lady's wraith has shown a disappointing failure to elucidate the mystery.