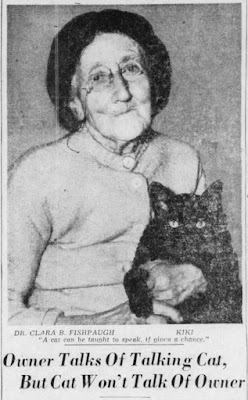 It's another Talking Cat Week at Strange Company! From the "Baltimore Sun," December 21, 1949:


Kiki, of Charles Street avenue and Chesapeake avenue, withheld comment yesterday afternoon on his guardian's claim that she regularly regularly holds conversations with him. Kiki is a cat.

The claimant is Dr. Clara B. Fishpaugh, Ph.D., D.Sc, a former professor of education and psychology at West Virginia Wesleyan College. Kiki wandered into Dr. Fishpaugh's Towson home about six years ago, she recalled. The first time that she learned of his superfeline faculty of speech, Dr. Fishpaugh said, was not until about two years later. "I had brought him some lamb kidneys from the market. He's very fond of lamb kidneys.

"Kiki distinctly replied. 'Yeah.' He never has managed to pronounce pronounce his S's."

Since that astonishing exchange. Kiki's vocabulary has been enormously increased, or. at least, more fully demonstrated, Dr. Fishpaugb recounted. On a hot summer day, the cat is likely to come crawling into the house, apparently hot and tired, collapse on a cushion and exclaim. "Aw in," which, Dr. Fishpaugh explained, means, "I'm all in."

One recent inclement afternoon, Kiki returned dripping rain and informed the psychologist, that he was "cold-wet."

A great lover of crabmeat, Kiki recently surprised Dr. Fishpaugh by scorning a dish of it and strolling airily out of the dining room. "What's the matter?" Dr. Fishpaugh inquired. "Don't want it," Kiki reportedly replied.

Dr. Fishpaugh was afraid for a moment that Kiki was talking nonsense until she observed that he had neglected food only because he had caught sight of one Suzie, another cat, with whom he is on good terms.

"Kiki is not very friendly with strangers." Dr. Fishpaugh pointed out. "But, after all, there is no other animal as individualistic as a cat, is there?" Like a child coaxed to perform for the benefit of visitors. Kiki is likely to seal his lips and utter not a word when on show. This childlike obstinacy fits Dr. Fishpaugh's theory that animals in some ways resemble human infants. "It has always been my opinion," she said, "that animals learn like children, only more slowly. The trouble is that few animals are given the chance to learn."

Furthermore, Dr. Fishpaugh contends that animals learn not only by association but by their reasoning power and intelligence. Although occasionally inclined to be moody and even rude, Kiki usually calls Dr. Fishpaugh "mom," she said fondly.

Although most of Kiki's conversation seems reserved for Dr. Fishpaugh. she says her pet once amazed a brush salesman and on another occasion caused a plumber to observe Kiki had "a lot more sense than some people." The brush salesman had been in the house a half hour and Kiki obviously didn't like him, according to Dr. Fishpaugh. She said Kiki finally burst out with: "Man." "Do you have a parrot?" she quoted the brush man. "No, a talking cat," she said she replied.

Kiki apparently looks after his own health quite carefully. He retires for the night promptly when the clock strikes 8 P.M. He wears a snug sweater which Dr. Fishpaugh has provided for him. He carefully avoids the lawn when he is warned that dead grass is being burned there. He stays at home when Dr. Fishpaugh tells him that dogs are at large outside.

Dr. Fishpaugh said that some of Kiki's sentences are almost complete, such as, "Dog out now." There are times, on the other hand, when Kiki's remarks are limited to cryptic monosyllables and nods of the head.

He apparently tends to be reticent when his feelings are hurt. One of the times that Kiki really seemed to be offended was when Dr. Fishpaugh told him about a talented cat that could sing "Silent Night" and earn large sums doing so. "Kiki warbled a few notes," Dr. Fishpaugh said. "It didn't sound like much. When I asked him to try again he just shrugged, as though to say, 'I already showed you I can do it.' "


A side note: to date, I haven't been able to find out anything about the cat who sang Christmas carols, but rest assured, the search goes on.
Posted by Undine at 4:45 AM