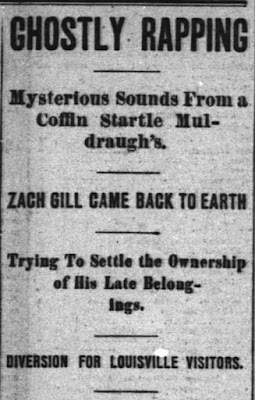 This cautionary tale about the Fortean dangers of second-hand clothes comes from the "Louisville Courier-Journal," August 14, 1897:

The residents of Muldraugh, a summer resort much frequented by Louisville people and located about twenty-eight miles from this city, on the Illinois Central railroad in Meade county, are just now in the midst of a six weeks sensation in which spirits other than the kind Kentucky has made famous figure.

Tom Gill, who occupies a cottage near the town, is the present possessor of a rough wooden coffin filled with clothes and trinkets which formerly belonged to his brother, but about which there has been from time to time considerable controversy.

For the past six weeks mysterious knockings have proceeded from the coffin, and in spite of watchful investigation, both by the enlightened and the ignorant of the neighborhood, no one has yet been able to account for the noises.

The story back of the rappings and the one upon which the theory of spirits is built is quite an interesting one.

Nine years ago Zach Gill got into a quarrel with Widow McCarthy about a cow. He waylaid her on the road and shot her dead with a shotgun. He was arrested and convicted, but through the testimony of the late Dr. B.K. Fusey he was adjudged insane and sent to the asylum for the insane at Lakeland. He died two years after he was taken to the asylum and his remains were placed in one of the rough wooden coffins provided by the State and sent to the man's widow. In the box were placed the man's clothes and other belongings. The body was placed in a coffin provided by the family, and the clothes and trinkets were left in the rough wooden box.

Tom Gill, a brother of the unfortunate man, claimed all these things, but the dead man's widow refused to give them up. She set the gruesome relics in the attic, and there they remained up to a few months ago, when she died. Tom Gill at once took possession of the coffin and its contents and removed them to his home a short distance away. At the same time a son of the late Zach Gill claimed that the things belonged to him, but Tom would not listen to his contention.

After Tom had the things he was put to some trouble to dispose of them. He finally set the coffin out on the porch in plain sight of the people who pass the house daily. For some time nothing out of the ordinary occurred. About six weeks ago, however, about the time of the arrival of summer boarders, strange noises began to be heard. Tom Gill, indeed, was awakened by rapping apparently on his door, which is immediately behind the coffin. The rappings disturbed his sleep. He got up and opened the door, and was not a little surprised to find no one about. He shut the door and again retired. He had hardly stretched himself when the rapping were repeated. He again got up and still found no one at the door. He believed that someone was playing a practical joke on him, so instead of going immediately back to, he stood up behind the door, which he left unlocked. As soon as the rapping were repeated he jerked the door open, leaving no time for any practical joker to get out of the way. No one was there. 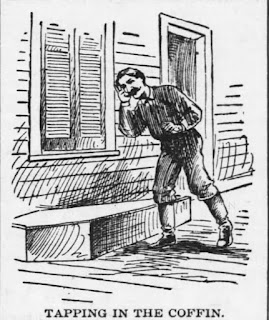 Then it was that his attention was attracted by a peculiar tapping in the coffin. He got a lantern and opened the coffin, taking out all the clothes and examining them carefully. His search was unrewarded. As soon as he shut down the coffin lid the rapping was repeated. By this time he was in a highly excited and nervous state, so he hastily sought refuge in the house and tightly locked the door. Since then not a day or night has passed that the knocking has not been heard. The story that spirits had begun to visit Tom Gill's home soon attracted every villager to the haunted spot, and scarcely a day passes that a group of curious people can not be found about the coffin waiting to hear the strange noise. These mysterious sounds have afforded diversion for about fifty Louisville boarders at the Twin Caves Hotel a short distance away. They hold nightly ghost parties and sit about the coffin in solemn state waiting for the spirit to materialise. They have opened the coffin, but have been unable to discover any cause for the peculiar phenomenon. The ignorant say that it is the spirit of old Zach Gill trying to tell to whom the clothes should be given. Of course the enlightened visitors and the intelligent inhabitants of Muldraugh do not believe a spirit is responsible for the sounds, but they admit that they are unable to discover just what does cause them.


The story appeared in a handful of newspapers for a few months, apparently without any resolution.  It is unknown what finally happened to those all-too-lively relics.

As a side note, I miss the days when hotel entertainment included haunted coffins full of rapping clothes.
Posted by Undine at 4:53 AM