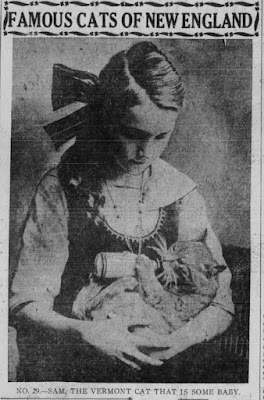 This installment of the "Boston Post" series, "Famous Cats of New England" looks at a pampered Vermont baby:


What's the fun of ever being a grown-up cat and roaming far afield to acquire a fighting record when right at home's so comfy and there's milk in a nice little bottle, and a dear mistress to see to one's breakfast each day?

That's what Sam, two-year-old tiger cat of Norwich, Vermont, wants to know. Sam thinks he's pretty famous, too, for he has heard his little mistress, Grace Ferrin, say that she's sure he's the only two-year-old cat in New England that has nursed from a bottle all his life. Moreover Sam holds the bottle from which he breakfasts daily all by himself. He lies, baby fashion, in his missy's arms and supports the bottle with his hind feet, at the same time clutching it up near the neck with his fore-paws.

"No scrapper, but very bright," is the way Sam is characterized up in Norwich. He knows perfectly well how to answer the question. "Sam do you want your bottle?" and he willingly leaves a saucer of milk to take it from the bottle instead. Sam was born in Hebron N.H., but this fall came to add to the famous cat population of the Green Mountain State.
~January 6, 1921