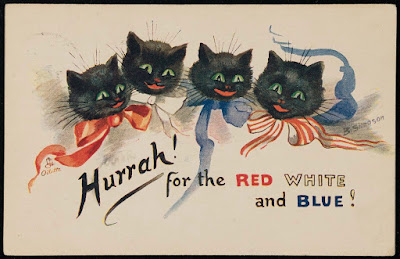 As we all know, nothing gets the good old-fashioned holiday spirit going like endless tales of death, terror and destruction. And as anyone who has perused old newspaper archives can attest, nothing says "death, terror, and destruction" like a vintage American Fourth of July celebration.

Yes, indeed, it's time for Strange Company's annual Independence Day party. (Our proud boast: "No one gets out alive.")

Look up old newspapers for "July 5" of any year and be prepared for what reads like casualty statistics from a particularly brutal war, all presented with a barely disguised glee.


If I have learned anything from compiling these annual July 4th posts, it's that there are few phrases more terrifying than "homemade fireworks." The "Arizona Republic," July 4, 1939:

One victim lost his left hand. Two others suffered the probable loss of one eye each. The accident occurred in a boathouse on Jamaica Bay, Queens.

Fragments of flying metal inflicted deep cuts on the pre-Fourth celebrators, and all suffered severe burns.

Police said the youths had tied together 50 highly explosive "cherry bomb" firecrackers and touched them off to make "one big one."


Put railroad flares together with a lighted match, and what do you get? Yes, of course. This headline.

When you come across the words "boy chemist," around the beginning of July, you just know the story will not end well. The "Akron Journal," July 2, 1928:


New York, July 3--Because of a boy chemist's efforts to make his own Fourth of July explosives one lad and a fireman were in a hospital today.

An explosion in the home laboratory of Philip Rosenblatt, 17, wrecked the apartment. Philip's skull was fractured. Robert Withers, inspector of the bureau of combustibles, was burned severely by another explosion when he was investigating the first.

A month ago Philip graduated from an evening trade school. He is a cripple. Barred from play he became something of an expert in chemistry.

"Wait until you see the fireworks I'm making for the Fourth," he boasted to a friend.

A policeman heard an explosion yesterday and dashed up the stairs to the Rosenblatt flat. In the small front room the boy was prone from injuries. His 16-year-old sister had been blown from her bed and was bruised. In the adjoining flat a baby was thrown from bed and bruised.

Five hours later as Inspector Withers was wrapping torpedoes which Philip had made, one of them exploded and set off several others. Withers' hands were mangled.

Louis Rosenblatt, Philip's 11-year-old brother, was severely burned by the second blast and a patrolman was struck in the eye by flying debris.

You don't have to be an "expert in chemistry" to send yourself to a hospital. The amateurs manage that very well on their own. The "Pittston Gazette," July 19, 1934:


Barnesville, O.--Matthew Van Fossan, 14, wanted to invent some fireworks of his own. He tried using carbide of the type which fills mine lamps, put a quantity in a fruit jar, was blinded in one eye when water reached the chemical, exploded it.


Well, kids will be kids, right? Once a person reaches maturity, they put things like DIY explosions behind them, right?

The lesson is clear: don't set off fireworks yourself. Go out and enjoy a professionally-run city-sponsored display instead.


Tacoma, July 4--The fireworks, which wee to have been set off here this evening in Wright park to make a finish to the big Fourth of July celebration, caught fire from almost the first rocket that was sent up, and in an instant the entire heap of explosives was flying in every direction. About four dozen eight-pound rockets flew through the audience of 30,000 persons, creating quite a panic, in which many were injured. Others were struck by the flying explosives, and it is estimated that as many as 50 were more or less injured, none fatally.

Van Allen Smith, who was assisting with the fireworks, stood his ground in an effort to scatter the fire, and was terribly burned. One arm was broken by an explosive. It is believed that he will survive.

Miss Hattie Braizeman was struck in the stomach by a rocket and seriously injured. One child is reported to have lost the sight of both eyes. J.H. Davis, chairman of the committee, had his right hand severely burned. Two children of E.S. Squires, who superintended the firing of the explosives, were burned about the face.

The audience was congregated along the slopes of the hill on which the fireworks were to be set off, and had crowded in a circle around the men at work, being only a few feet from them. Only slight precautions had been taken to protect the fireworks from flying sparks.

About 50 children were lost in the panic, and the police were busy at a late hour tonight trying to restore them to their parents.


More proof that July 4th is the most lethal of holidays, and in ways you'd never expect. The "Los Angeles Herald," July 7, 1908:


Chicago, July 6--Suffering all the agony, physical and mental, and exhibiting many of the symptoms that accompany death by poisoning, John Nerisa is dead, the victim of hallucination and auto-suggestion. It is believed his condition resulted from worry because of Fourth of July noise.

A weak mental state is believed responsible for the self-hypnotism. It was asserted by several physicians that scores of deaths occur annually in every large city from such conditions.


And then there's this odd little item from the "Pacific Commercial Advertiser," July 14, 1909:


The first Fourth of July fatality in Seattle was recorded when Louis Rohs, aged ten years, died of tetanus, caused by the premature explosion of a toy pistol.


Just another Independence Day celebration in Hillsboro, Ohio? Or guerrilla warfare in Afghanistan? Who can tell the difference? From the "News-Herald," July 7, 1898:

Some one must have taken Johnny Ervin for a Spaniard on the night of the Fourth. At any rate they tried to blow him up. He was passing along North High street when a sub-marine mine or other dangerous explosive exploded. He was just stepping over it and the concussion came near taking his pants leg off. A large hole was torn in his shirt, his hat was knocked off and almost torn in two and his clothes and himself were otherwise mutilated. Johnny, though, is able to be about and still swears allegiance to the American flag.

[Note: Many thanks to Chris Woodyard for bringing the above item to my attention.]

These next three items just seemed to go together: 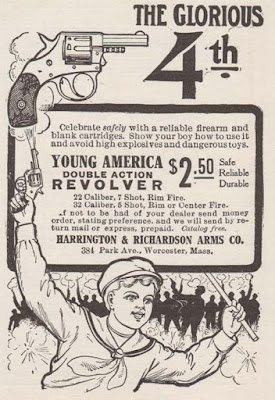 "Deseret News," July 5, 1904: Paterson, N.J., July 5--Aaron Vandebrink, 6 years old, was accidentally killed by his aunt, Mrs. Mary Demarest, who was celebrating the Fourth. She was firing a revolver from a window in her house, and one of the bullets struck her nephew, who was standing on the sidewalk. Mrs. Demarest was arrested.


Not all the Independence day dangers come from gunpowder. Insulted cooks are among the unexpected hazards of the day. From the "Buffalo Commercial," July 5, 1890:


Brooklyn, July 5--Patrick Landrigan and Philip Kavanagh, a boarder in Landrigan's house, celebrated the Fourth by visiting saloons and getting drunk. They returned to the house last night, and when Kavanagh sat down to supper he made disparaging remarks about the food.

Mrs. Landrigan resented this and demanded the money for board which Kavanagh owed. Kavanagh struck Mrs. Landrigan in the face, knocking her down. Her husband rushed to her assistance, when Kavanagh knocked him down also. When Landrigan regained his feet he rushed at his assailant and a desperate struggle ensued. Mrs. Landrigan, seeing her husband was getting the worst of it, went to his assistance and succeeded in separating the men. Kavanagh again rushed at Landrigan and struck him a powerful blow on the jugular vein which knocked him to the floor unconscious. An ambulance was summoned, but the man expired before its arrival. Kavanagh was arrested.


Another story illustrating how holiday festivities bring out the best in people comes from the "Los Angeles Times," July 6, 1902:


Cattlettsburg (Ky.) July 5--Jesse Rule, a retired merchant of this city, was stabbed and killed at a Fourth of July celebration here yesterday. Fred Burnett has been arrested and charged with the murder.


And finally, let's end on a cheery note. Meet Bertha Rice, who took the spirit of the holiday exceptionally literally: