Disappearances are arguably the most haunting category of true crime/mystery cases. When a person seemingly vanishes from the earth for no obvious reason, it brings us uncomfortably close to a dangerous Netherworld.

It shouldn't be forgotten that the opposite is true. When someone's body suddenly appears, with no clue to the deceased's identity or how they came to be where they were found, one is confronted with the same disquieting reminder of how very fragile and senseless human life can be. When the body in question is that of a small child, the puzzle becomes even more eerie.

This particular "reappearance" mystery opened on the afternoon of May 23, 1971. One Ian Robertson was taking his five-year-old son Neil for a walk along the beach near their home in Tayport, Scotland. Robertson happened to notice an object floating two or three yards from shore. He thought it was a large plastic doll. His curiosity piqued by the odd sight, he went to examine the object more closely.

He was horrified by what he found. "When I turned the bundle over," Robertson later recalled, "it was a quite horrible sight--to see that it was a human body. A little boy about three years old. The nose and lips were almost gone and the knees were in a bad shape, all points where the body would have been in friction with the rocks or the river-bed...it seemed so much like a bad dream." The little corpse was dressed in a pajama top over a blue shirt. Robertson kept the news of his discovery from his son, merely ordering Neil to run home. He then summoned police.

A pathologist determined that the child, who was between two and four years of age, died from drowning. He had been in the water for two to six weeks. Aside from the marks caused by hitting rocks, there were no signs of trauma on the body. It was impossible to tell if the boy's drowning was due to accident or murder. The boy was well-nourished and appeared to have been well cared-for. The only clue to his identity was on the label on his shirt: "Achilles, size 3." The label enabled investigators to determine that the shirt had been made by the Leeds firm of John Barren & Co. That particular line had been discontinued five years earlier, suggesting the shirt was a hand-me-down or purchased at a second-hand store. This led police to surmise the boy came from a relatively poor family who lived somewhere in the UK.

The discovery was well-publicized. Scottish media carried stories about the mystery every day. Police spread word of the anonymous child through Britain and continental Europe. It was assumed that the boy's parents or other close relatives would instantly come forward to claim the body. As the days, then weeks, went by, everyone involved in the case became increasingly disturbed by the fact that the child remained unidentified. Not one person stepped forward with any information about him. No child matching his description had been reported missing anywhere in Great Britain. It was as if this little boy had gone through his short life completely invisible to the world.

It made no sense. Even if his parents or guardians had murdered him, surely there must have been relatives or acquaintances who could identify him? If his parents died with him, either through accident or a suicide pact, where were their bodies? The most popular theory--that the boy and his family had been on a ship at sea which sank, killing all aboard--was abandoned when it was found there were no reports of lost or abandoned vessels around the time the child drowned.

Police pursued every possible lead that came to their attention, but to no avail. The child's identity--and the answer to how he came to be found dead on a Scottish beach--remained as elusive as ever.

Five days after he was discovered, the mysteriously lost boy was buried in a simple, but well-attended ceremony. The cost of the funeral was paid for through a fund-raising campaign. A local sculptor donated the headstone, which reads:


Erected by the people of Scotland
In memory of
THE UNKNOWN BAIRN
A wee boy
Aged between 2 and 4 years
Found on the beach at Tayport
23rd May 1971
"Suffer little children to come unto me."


The boy has not been forgotten by anyone involved in the mystery. Locals still gather at his grave on each anniversary of his burial. Some years later, the Detective-Superintendent in charge of the case, James Morgan, told a reporter, "I can't really say why, but I always felt, and feel even more strongly these days, that the boy was reasonably local and the child of poor parents who were perhaps too short of money to give him decent burial after accidental drowning and/or too embarrassed to come forward and try to do so while all the publicity was going on." Morgan felt the child likely belonged to "the travelling folk," who are "a little lax about the bureaucracy that the rest of us have grudgingly learned to live with."

The boy may be unnamed, but he is not unmourned. As Morgan said, "Someone always puts fresh flowers on his grave." 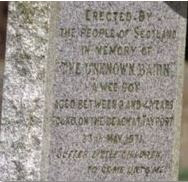