The Ghost of John Koch


In January 1921, a Trenton, New Jersey garage mechanic named John Koch shot and seriously wounded a co-worker and then committed suicide. The death of this otherwise unremarkable person would, in the normal course of events, have been swiftly forgotten by everyone but his family.

John himself, however, had other ideas. 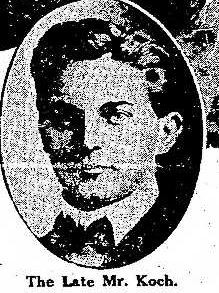 A couple of months after his death, some very unnerving things began happening in his home. Koch's widow declared that her husband's ghost began visiting her regularly. She would wake up in the middle of the night to see him standing at her bedside. Her brother Stephen Hannan and family friend Ephraim Cordwell reported hearing "weird noises" around the house that sounded like the smashing of dishes. However, nothing was ever found broken. One night, Hannan too was confronted with the figure of the dead man. "I will stay until the cat leaves. I will be back on Friday night," the ghost allegedly told him. "I will then leave for one hour, but I will return." Hannan's response was to let out a shriek and throw an oil lamp at the spirit. All this accomplished was to make a dent in the wall.

At this point, Mrs. Koch, alarmed by the crash, came downstairs. Through the kitchen door they both saw a white cat spring from the branches of a tree in the back yard and vanish into the darkness. The ghost gave a groan and also disappeared. And Mr. Hannan fainted.

Hannan had never met John Koch, but he immediately recognized him from photographs. Hannan noticed something particularly odd about the apparition: it "had a hole in the middle of the forehead that looked like it was plugged with cement." Mrs. Koch found this detail especially disquieting. She had never told anyone this, but after her husband shot himself, the undertaker had plastered over the bullet hole in his head.

Hannan and Cordwell took to holding all-night vigils in an effort to solve the mystery. They would see the latch on the kitchen door begin to jiggle. When they opened it, no one was there. They tied the latch with twine, but that did not stop the movement. They would only later find the cord cut in several places. Cordwell commented, "I claim I'm not afraid of anything living, human or animal, but what I saw convinced me. I didn't see as much as Steve did, but what I saw was enough. If I never see a ghost again in all my life it'll be soon enough!" John Koch's favorite child, four-year-old Margaret, cheerfully told her mother one morning, "Papa came to see me last night. He asked me if I was a good little girl."

On the Friday night when the ghost had promised to return, three oil lamps were suddenly extinguished simultaneously. The next night, the entire household was treated to the sound of falling furniture, but, again, nothing was seen to be out of place. The residents of the Koch house, as well as some half-dozen inquisitive neighbors, continued to see the ghost of John Koch, surrounded by a blue chiffon-like mist--but with a change: the ghost was now accompanied by his friend, the large white cat.

It all so shattered Mrs. Koch's nerves that she placed herself under the care of a physician. Adding to her anxiety was her deep sense of guilt.  She suspected that John had "returned" because he was upset at her for sending two of their four children to a "home." (After John's death, she had felt financially and emotionally incapable of adequately parenting all her offspring.) "I don't believe in ghosts," she told a reporter. "I am a Catholic, and we are not allowed to believe in such things. But I don't know what to think. I went to Father Leonard of the Sacred Heart Church and begged him for some holy water. He would believe nothing of it, but he gave me some holy water and I sprinkled it on the walls. It didn't seem to do any good.

"John and I, when he was alive, used to talk sometimes about the dead returning. He did not believe it any more than I did. We both hated to look at dead people, and I told him I would not want to look even at him if he were dead. He said if he died he would not come to me unless it was to help me. I wonder if that is what he wants.

"Last January John was in fear of losing his job at the garage and he thought Theodore Opendaker, who worked there with him, was to blame. He shot Opendaker in the neck, then shot and killed himself. I am sure that he did that in order that I could get the insurance money, for there was nothing else for me and the children to live on. John had lost all his money in real estate." After her husband's death, Mrs. Koch collected $1000 in life insurance. She believed John was trying to advise her how to use the money.

Unsurprisingly, the Koch home became a local tourist attraction. As many as a thousand people would gather around the residence every night, hoping to catch a glimpse of the ghost. Mrs. Koch, at the end of her emotional tether, collected her remaining children and fled the house, leaving it in the possession of the crowd of amateur ghostbusters.

Fourteen professional spiritualists, lead by a Mrs. Fogg, formed a circle in the house, bidding the restless spirit to leave quietly. Then there was the motorman who "spends his leisure time in spiritualistic seances and is interested in correspondence courses for the improvement of his already elaborate English." And the man with the psychic dog. And the "flaming-eyed girl" who said she was the representative of the "Master Key." And, of course, a host of reporters from newspapers all over the East Coast. They were all having a wonderful time. Sadly, the spiritualists failed to make contact with Koch. They blamed an interfering rival spirit. "Every time one of the mediums thought she had John's ghost on the other end of an astral wave the interloper would cut in and request the medium to ask Mrs. Koch if she 'remembered Andrew.' The widow indignantly denied that she remembered anybody of the kind, but Andrew was not to be snubbed so easily."

The "New York Tribune" reported that "Once or twice a medium got what she thought was a word from the ghost of John. The first time it was something to the effect that when the garage mechanic killed himself he had been under the control of a malign spirit. On another occasion there was a demand to know why his hat and coat had not been kept hanging on the customary nail in the kitchen."

The "New York World" described a typical evening among the spooks. A framed photograph of Koch's mother-in-law, which hung in the front room, suddenly began shaking. A nail dropped to the floor. "The man with the 'psychic dog' picked it up and examined it excitedly. The motorman jumped from his chair." These spectral sleuths surmised that "the ghost, seeking a medium through which to manifest itself, and finding the widow and the children were not at home, had selected the photograph of his mother-in-law as the best available instrument." Stephen Hannan, nervously fingering the shotgun he now carried everywhere, muttered, "Strange things happen in this house." (After Hannan declared that he would fire his gun through the kitchen door if he heard any more rattling, police, alarmed he would only shoot very much alive onlookers, confiscated his firearms. The officers told reporters that Hannan had been gassed during the late World War, "and has not been quite the same since.)

About fifteen minutes after Koch's ghost let the world what he thought of his wife's mother, there were several loud thumps on the floor. The kitchen door latch began its nightly rattling. The audience both inside and outside the home then heard a bell ringing steadily for eight minutes. The source of the noise could not be found.

In April, the story took an even sadder turn. Police had become increasingly annoyed by all the disruption the "ghost" was causing in the neighborhood. After consulting with local authorities, it was decided that the best way to resolve the situation would be to put Mrs. Koch in the New Jersey State Hospital For the Insane. It was announced that the entire "haunting" was merely the product of a grieving widow's over-strained mind. The newspapers evidently agreed, as the story immediately disappeared from the press. I have not been able to learn what became of Mrs. Koch--or for that matter, her husband's ghost.

It must be said, however, that her final statement to reporters--made just the day before being removed to the asylum--was completely rational. "When the first things began to happen," she recalled, "I realized that I had been through trying experiences and was nervous, and I put it down to that and wouldn't let myself believe what I saw and heard. But when it happened to others also--well, the least I can say and not be bigoted is that there must be something in it. I really believe much more strongly than that, although I don't want to."

So, what happened in this Trenton neighborhood? Was the entire "haunting" merely the product of Mrs. Koch's tormented imagination? If so, how to explain the phenomena experienced by the others? Or was an unhappy spirit, anxious about his family's welfare, unable to rest in peace?

Perhaps it was some combination of the two.
Posted by Undine at 4:28 AM