Newspaper Clippings of the Independence Day 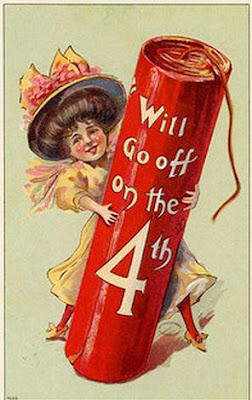 As has become traditional on this site, here's a little round-up of star-spangled Independence Day horrors, directed in particular to that idiot down my street who, on the night of every July 4th, insists on setting off an arsenal that sounds like a riot in Hell. I doubt he reads this blog--public opinion questions whether he is capable of reading, full stop--but one can dream.


Chicago, July 6.--Suffering all the agony, physical and mental, and exhibiting many of the symptoms that accompany death by poisoning, John Nerisa is dead, the victim of hallucination and auto-suggestion. It is believed his condition resulted from worry because of Fourth of July noise.

A weak mental state is believed responsible for the self-hypnotism. It was asserted by several physicians that scores of deaths occur annually in every large city from such conditions.


The "Reading [PA] Times" of July 7, 1913 showed that their city really got into the holiday spirit:


Mrs. Charles J. Stahl was accidentally shot twice in the arm from a revolver held by her husband in their home, 1640 Muhlenberg street. The weapon was the property of their son and was lying upon the table. When Mr. Stahl was examining it the blank cartridges were discharged.

A package of fire crackers in the pocket of Stanley Kozlenski, aged 8 years, 653 Strong alley, became ignited from a stray spark and exploded before they could be extinguished by a bucket of water. He was removed to the residence of Dr. F.H. Lawrence, 1502 Perkiomen avenue, where it was found that he had suffered severe burns of the left leg from his toes to his hips.

Catapulted by the explosion of a giant fire cracker, a large piece of wood struck Warren Bechtold, 17 years old, 935 Robeson street, in the face while walking upon the street near his home. He was knocked unconscious and was carried to the residence of Dr. A.N. Seidel, 824 North Tenth street, where it was found that he had suffered a broken nose.

Frightened by the explosion of several fire crackers, Lester Lincoln, 14 years, Seventeenth-and-a-half and Haak streets, fell from a bicycle he was riding, receiving a concussion of the brain, several lacerations and body contusions. He was carried unconscious to the residence of Dr. F.G. Runyeon, 1390 Perkiomen avenue, who dressed his wounds and later he was removed to his home. His condition is serious.

Fred Miller, 14 years, 549 North Eleventh street, received a charge of shot in the face while walking along the street. When brought to the residence of Dr. M.L. Cahn, 551 North Eleventh street, he was unable to explain how he was shot, declaring that he did not see the person who held the gun. The physician removed most of the shot. 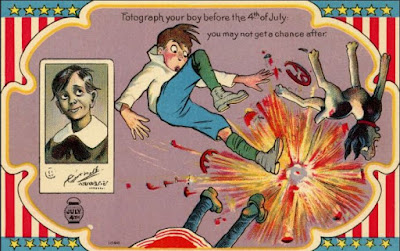 On July 5, 1911 "Seattle Star" congratulated everyone for the relative lack of casualties, rather in the tone of survivors of an annual natural disaster:

The "San Francisco Call," on July 4, 1903, celebrated the holiday in a decidedly grim manner: 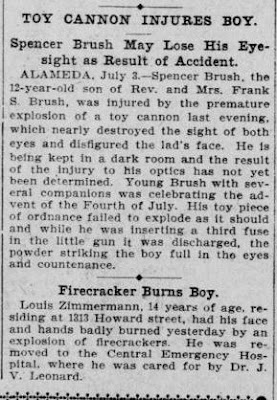 As a change of pace, here is a holiday reveler who was not lethal, just...overenthusiastic. The "Philadelphia Inquirer," July 12, 1876:


A deranged man, whose diseased mind is crowded with patriotic thoughts, created a genuine sensation and much amusement yesterday by his antics around the State House. Early in the afternoon he made his way into Independence Hall and was determined to sign the original draft of the Declaration of Independence.

After being removed from the hall he climbed to the roof of the State House by a lightning rod, and then with considerable effort clambered up the steeple, finally ascending into the belfry. He grasped the hammer of the new bell and rang it violently for some five minutes, until the hand of Captain Donnelly, the special officer of the hall, was laid upon his shoulder.

The lunatic was locked up in the Central Station, where he gave his name as W.J. Sullivan, and residence No. 404 West Fifteenth street, New York. He was neatly dressed, but had no money upon his person.


So, my fellow Americans, I trust you now understand how to have a happy July 4th. No DIY fireworks, no self-hypnotism, no efforts to annotate the Declaration of Independence.

And if one of you could hog-tie that guy down my street and lock him in a closet until the holiday is over, I would be most grateful.

So would the cats. 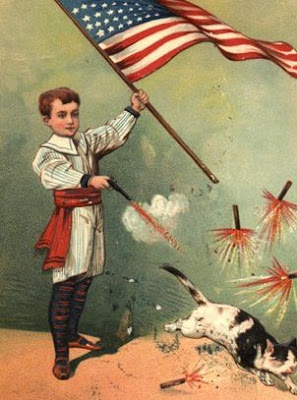 [Note: Previous Independence Day disasters can be found here and here.]
Posted by Undine at 4:51 AM