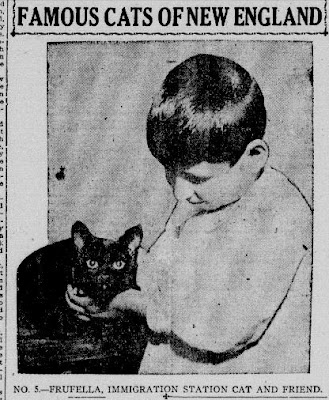 In the fifth installment of the "Boston Post" series, "Famous Cats of New England," we meet the ultra-cosmopolitan Frufella:


The "cat without a country," the "international cat"--Frufella, the "greeter" cat who gives first welcome to the immigrants that land upon our shores--has been "in detention" for two years at the immigration station.

A stowaway cat was Frufella, captured aboard the Canopic and turned over immediately to the immigration officials. She cannot be deported because nobody can find out whence she came. Useless are the scores of interpreters who speak to her in every language under the sun. While Frufella appears to understand them all, not one of them can speak her language. [Ed. note: a common situation with cats.]

They were sure she was Italian one day when she licked up with great relish a sizable saucer of macaroni and cheese. But the next day with the same enthusiasm she devoured chop suey, so they couldn't be sure.

When the reporter was leaving the immigration station after interviewing Frufella she followed along most hospitably to the door. A group of new immigrants who had never seen her before called out their greetings. In nearly 15 different languages Frufella was saluted. Greek, Swedish, Portuguese, Armenian predominated. But the Polish "Plen kua koska" ("nice kitten") seemed to please her best. That's what little Mary Nahandian, the eight-year-old Armenian girl who has been at the station for three months, calls her. Mary and Frufella are playmates, although Frufella is frightfully jealous of a great big dolly that someone gave Mary.

No lazy loafer of a cat is Frufella. An expert fisherman she. Mousing, too, she stars in. But many a fisherman who ties up at the docks near the immigration station allow they could take lessons in their trade from the immigration cat. Among the great posts that support the immigration pier is a nubbly one that has a big hump quite low down, and occasionally even washed by the swish of the tide. Here Frufella perches. Watching for her victim closely, she swoops out her paw, sudden and swift. Almost invariably the little fish she saw is caught fast in Frufella's claw.

With so much attention, plenty of food and plenty of warm corners to curl up and sleep in, Frufella appears to have lost all desire to take to the sea again. Never once does she make any attempt to leave detention. There is that about Frufella, stowaway cat without a country, that spells the contented cat who stands willing and ready to spend the whole of her nine lives just where she is.
~December 11, 1920