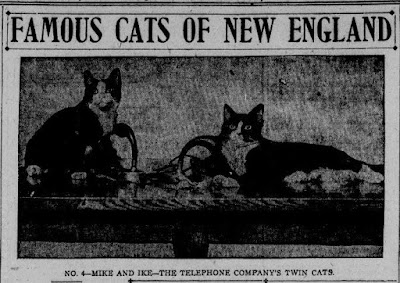 
The cats that have 1800 girls to love them--Mike and Ike, the Telephone Company's twin cats--scorn to lay claim to any such plebeian accomplishment as mice or rat catching. Never, since last April, when they came to 119 Milk street, wee bits of black kittens, have they done one single stroke of honest work.

Today, great black and white beauties, they bask in the smiles and caresses of the 1800 girl operators;they spend most of their time curled up asleep on the comfortable leather couches of the recreation hall, and show pronounced enthusiasm only when the rattle of dishes in the locker room below announces that it is getting on toward mealtime.

New England can hardly lay claim to two handsomer or more dignified cats than Mike and Ike. Their fur is like silk. Its black is as black as it is possible for black to be. Its white is the white of faultlessly laundered linen.

Not a minute of the day passes that Mike and Ike are not being talked to and stroked. The girls, working in relays, are coming to recreation hall for their 15-minute reliefs every hour of the day and night. They never go back to work without a bit of play with the twins. They always used to bring them some little treat, like a taste of chicken or some catnip.

Killed with kindness, very nearly were poor Mike and Ike. Treats from 1800 loving "aunties" soon landed them up at the Angell Memorial Hospital. Now they are kept on a strict--no eating between meals--diet. Still Mike and Ike appear excessively well fed cats. They are heavy to lift. They have that delicious sort of sleepy languor that makes contented house cats so comfy and cuddly.

Man haters indeed are Mike and Ike. They can scent a man the moment he enters the room. Let them be curled up fast asleep at the other end of the big hall and let one mere man so much as set foot inside the door that is furthest away and "Pssssssst! Pssst!" The twins are on their feet--backs up, tails bristling.

Spitting at the Post photographer the moment he entered the room were Mike and Ike. No soothing word he could say had the least effect. They regarded him with suspicion every moment he was there. Their great gold eyes watched him unwinkingly wherever he went. Their tails stirred uneasily. Thoroughly displeased were they that mere man should have invaded the sanctum where they reign supreme.

They bat a small rubber ball about for hours between each other, racing the length of the big room to catch it and bat it back. But as their kitten days grow further back they play ball less and less. They sleep more and more.

Each with a mammoth lounge completely to itself the cats were blissfully sleeping when the reporter called. They were gracious enough about being rudely awakened. They are used to that. They consented to having the head gear slipped over their heads and to sitting up quite professionally, as if they were saying "Hello." Nor did they run from the photographer. But, oh my goodness, how they hated him!

"They show their good sense and the way we girls train them," said the hello girls. "They're a credit to their 1800 aunties, Mike and Ike are."