Newspaper Clipping(s) of the Day

A few weeks back, I described the odd disappearance and death of a small child named Stephen McKerron. As I said in my post, I felt the case had many features similar to those missing persons cases covered in David Paulides' "Missing 411" books. These newspaper stories from Wales chronicle another tragedy involving a missing boy that I believe falls into the same eerie, inexplicable pattern. As far as I can tell, it is not covered in any of Paulides' books.


The visit of William Jones, of 9 James-street, Hardy, Pontypridd, to the town of Brecon was accompanied by a tragedy which threatens to embitter the lives of himself and his wife.

On Saturday evening Jones walked from Brecon to one military camp at the foot of the Beacons. He was accompanied by his son, a bright little fellow five years of age, named Thomas. With his blue eyes and bright brown hair Tommy looked the picture of roguish activity as he trotted by his father's side, dressed in a greyish suit, with jockey cap and collarette.

At the camp little Tom and his father met Tom's grandfather, who resides in the neighbourhood, and a cousin aged thirteen years, named W. J. Jones. The two boys were soon engaged in youthful pastimes, and the younger lad agreed to accompany his cousin to a place called Cwmllwch. Away they started, but after, it is said, crossing two bridges, and when they were half-way to the house, little Tom changed his mind. He would go no farther. He wanted his father. The boys separated. The boy of thirteen went on alone to the house. The little boy of five mysteriously disappeared, and up to a late hour on Thursday night no trace of him had been found.

After the elder lad had visited the house, he returned to the spot where he had left his younger comrade. Finding he was gone, the cousin hurried to the camp, and gave the alarm. A military search party was kindly and promptly ordered out by Major Lloyd.

The troops in camp were quickly on the alert. They carried lights, and used every device known to old campaigners to discover the lost lad. Until the midnight hour the eager soldiers explored every spot that could suggest itself, and the first faint light of dawn found them agarn searching for some trace of the lost lad. Every day, and almost every hour since the search has been continued, but the mystery is so deep that it would seem to need either the skill of a Baden-Powell or the genius of a Sherlock Holmes to ascertain whether there has been any foul play. The part of the Beacons where the lad disappeared abounds with gullies, over which undergrowths of trees and shrubs have grown thickly, and a body might be concealed for months if no unpleasant sign became apparent. The father is well-nigh distracted and a fresh element of pathos has been added to the tragedy by the arrival of the sorrow-stricken mother. The mysterious occurrence forms the leading topic of conversation at the Beacons, in the barracks, and throughout the neighbourhood of Brecon.


The interest in the boy lost three weeks ago on the Breconshire Beacons had dwindled down almost to vanishing point, but a new impetus has been given to the boy-hunt. On Tuesday night a special correspondent of the Daily Mail arrived in Brecon, with instructions to engage again in the search. He renewed the offer of £20 for anyone finding the boy alive or dead.

The theory that the poor little lad had wandered away and failed to return to the camp alone is no longer to be acted upon. The advice of detectives whose opinions have been secured has led those engaged in the search to believe that the child has been deliberately kidnapped. In pursuance of this theory the search will be conducted over a far wider area than before, and the hunt will be conducted so thoroughly and systematically that it is hoped the interest of the public will be secured in the quest. This will result in placing thousands of amateur but earnest detectives on the lookout for strangers who have a child, apparently, not their own, bearing a suspicious resemblance to little Tommy Jones, of Mardy.

There are two facts which have an important bearing on the kidnapping theory. The father recently stated in one of his final interviews with a pressman that his little boy had suffered from an injury to his leg or foot. As a result of this he would not run, but could walk fast. In any case, therefore, a five-year-old boy could not have had in twenty minutes a mile start of the soldiers who were searching for him. A second fact is that the father pointed out the print of his child's foot on the ground about 50 yards from the bridges over the brooks. He said that was the only print he could see of his child's foot. There were no other footprints before or beyond that spot. This fact might suggest that the child was carried by a person who placed him on the ground, so as to gain a minute's rest. To the despairing father and mother the kidnapping idea will be a ray of hope. It must be some comfort to know that men who have given their lives to criminal investigation believe in tie possibility of the little wanderer being yet restored to his loved ones. May that hope be justified by experience!


Sadly, as in the case of Stephen McKerron, those hopes were eventually dashed.  From the "County Observer," September 8, 1900:

The Brecon mystery has at last been solved. The body of the lost child Tommy Jones was found high up on the Beacons on Sunday afternoon by Mr. Abraham Hamer, a gardener, of Castle Madoc, Lower Chapel. Mrs. Hamer read the accounts of the missing boy on Friday of last week, and felt that she could not rest without making some effort to find him; she dreamed of Tommy Jones by night and thought of him all day.

So on Sunday morning she and her husband drove 10 miles to the bottom of the Beacons and climbed the steep sides, nearly 3000 ft. above the sea level. Hundreds of people have searched the same ground during the past month, and only three days ago the father of the boy walked within 20 yards of it. As they walked, at two o'clock they suddenly lightened on a little stretched out figure in front of them.

"Here he is," the man shouted, and his wife began to cry. Leaving Mrs. Hamer near by, the man quickly drove into Brecon, and soon Sergeant Hand, Constable Harwood, and a representative of the Daily Mail were on the spot.

It was a pathetic little figure that lay on the mountain top face downwards, hands stretched out, and head towards home. The pocket was turned out as though the last crumb had been taken from it, and the soles of the boots showed that he had walked far.

Evidently on the Saturday night when he was lost the boy made for the left in place of the camp to the right. Then he went down the hill and round, steadily leftwards. Going some way towards  Merthyr he would gradually get on the Mountain Ash road. Probably he recognised the peak of the Beacons and made for it. Had he walked a dozen steps further he would have seen the glen lying below with the home of his aunts. But from where he stood he could see nothing all around but the desolate hills. Not a house was in sight in all the miles of country. To the back, line upon line of black mountain ash stretched out; a few hundred yards to his right stood the grim peak of the Beacons; in front was nothing but sky. And so he fell, his hands clenched and his arms above his head.

A crowd quickly gathered, even in that solitary spot. The father tore up the mountain side, rushing along the almost perpendicular heights as though they had been level ground. "Tommy back, Tommy back my poor little lad," he murmured. Then for the first time in all these weeks he broke down, and tears saved his reason. One man fainted at the sight.

The condition of the ground clearly showed that the body had lain on that mountain side for a very long time. The child's hat lay within two feet of where he lay.

On Saturday a large detachment of the Breconshire Regiment, under the command of Captain C. Wadsworth, marched up to the Shire Hall early in the morning, and from there set out for the River Tarell. When the soldiers came to parts of the riverside so steep that they could not be properly examined from the banks, Captain Wadsworth, followed by his men, plunged up to the middle in the swift current and waded through the water. This had to be done repeatedly. At the same time the police and a number of civilians helpers were hunting in the direction of Mynydd Illtyd. Spreading out they first thoroughly explored an enormous wood a little over two miles from where the child was lost. When they had penetrated the wood the searchers turned to a stretch of bracken-covered mountainside many miles in extent. The hunters formed a line about half a mile in extent, and marched forward beating the land as though for game. They came to bogs where, the old mountain guides said, men sank completely so soon as they floundered in them. These bogs were probed, but yielded nothing. They walked warily around old slate quarries where a chance wanderer could easily fall and be killed everywhere were death-trap spots where a straying child must have been killed. The body has been missing since August 4--a month all but a day.


The spot where the body was discovered was over two miles from where Tommy had last been seen, and some 1300 feet higher.  No one could explain how this little boy--who was suffering from a leg injury, no less--had traveled such a long distance over difficult mountain terrain.  Another oddity is that Tommy was wearing a whistle around his neck when he vanished.  (It was still on his body.)  Why didn't he use it to summon help?

As in the case of Stephen McKerron, the coroner's inquest ruled that Tommy died of "exhaustion and exposure." The little boy's sad, strange death lingered in the collective memory of his community for many years.

Money was raised to build a memorial to Tommy Jones on the site where he was found. It still stands there today. 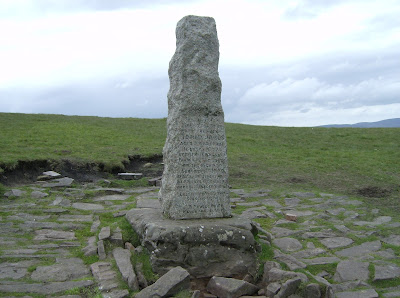