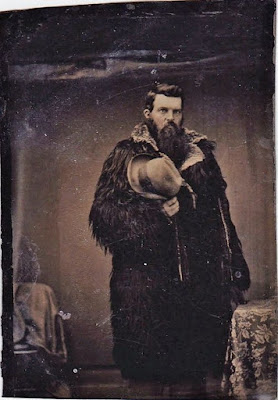 This story starts off with a guy named "Nam Sarcy" and just gets weirder from there. The "Taranaki [New Zealand] Herald," December 23, 1899:

A Texas rancher named Nam Sarcy was a famous bear hunter, and had scoured the woods in the neighbourhood of his home in Antelope Canyon, in Edwards County, until he knew every foot of them and every bird and beast within their confines.

Sarcy was an intelligent but uneducated man, in good circumstances, devoted to his family, and respected by his neighbours.

One day Sarcy disappeared from his home. He had often been away on hunting trips, and his family were not uneasy until his absence had run from days into weeks; then his friends and neighbours scattered through the mountains or formed little searching parties, and took the trail.

Sarcy had never exhibited mental peculiarities to warrant suspicion that he was not of sound mind; and it was supposed that he had met with an accident.

It had been his habit when at home to keep a pet bear. He was fond of bears, and nearly always had one about the ranch. His bears he raised from cubs captured in the mountains. Nothing seemed to give him so much pleasure as playing with his pet. He was a powerful man, and would amuse himself for hours wrestling with his bear, throwing it to the ground or tiring it in a scuffle.

He would often "play bear" for his children. He would go about the house on all fours, like a bear, growling and snapping at the children, who would scamper away screaming with delight at the play.

Sarcy had been gone from home some months, and his wife and friends had given him up. It was the general opinion that he had been killed in a fight with a bear or had met with an accident.

One day last August a hunter going through the woods not more than two miles from Sarcy's house found the rifle of the missing man lying on the ground under a large pine tree; not far away was the carcase of a large bear, which had been skinned. The hide was gone. This was thought to be a clue to the presence of Sarcy, but a search failed to bring any trace of him.

A few days after the discover of the gun, the community were thrown into wild excitement by finding the body of a little Mexican girl in a berry patch. She had been killed and the body partially devoured by a large bear, whose tracks were plain to old hunters. The trail was cold, however, and the bear could not be followed.

It is not a bear region in the vicinity of Antelope Canyon, but signs of them became frequent. Some children fishing in a mountain stream were chased by a bear. His big tracks were found, and the ranch men hunted him, but without avail. Bruin was as cunning as he was audacious. The hunters often saw his tracks by the streams, but not one of them caught a glimpse of him.

It was Sarcy's wife or widow--she did not know which--who was the first to meet the bear, who had become to the mountaineers a mysterious, uncanny beast.

One evening she was going to the spring for water. At a turn in the path she came face to face with the bear. She knew it would be fatal to run, for the bear would spring upon her. So she stepped slowly backward, the bear following as slowly. Her foot caught in a root, and she fell and rolled over and over, screaming for aid. The bear sprang for her, and began gently nosing her. Suddenly it turned, and galloped off into the woods.

When Mrs. Sarcy told her story there was much wonderment. There followed fast many strange adventures in all of which the bear took part.

One day a number of children were playing about the schoolhouse, when the big bear appeared and tried to join in their play. The children ran screaming to the schoolhouse for protection. The bear followed them into the house, and danced up and down the aisles. This would have been amusing had it been a tame bear, but here was the mysterious bear that no hunter could follow, and no hunter had seen.

The beast danced toward the teacher, who was terrified. It held out its paws as if in invitation to a waltz, and the teacher made a flying leap through the window. The bear growled in its disappointment, and the children fled through windows and doors and took short cuts for home.

This story aroused the hunters, and they organised a big chase, but no one around could find the bear, and there was not a hound in the country that could long keep its trail.

One morning Mrs. Sarcy found bear tracks in her dooryard. The evening before, and for several evenings the old deer-hound that had accompanied Sarcy on his hunting trips set up a furious barking.

One evening Mrs. Sarcy went out to where the old dog was playing with some large animal whose outlines she could only dimly make out. The animal stood near the gate, and the dog rushed upon it, frolicked around, barking joyfully.

Speaking of this afterwards, Mrs. Sarcy said: "I am not sure what the animal was, but I believe it was a bear."

The people began to think the woods haunted: the frontier preacher called a meeting to talk the matter over. While the meeting was going on and the preacher was praying, the mysterious animal walked in at the back door, slapped the preacher over, and, standing on his hind legs, ambled down the aisle, snapping at the flying worshippers, who had left their guns at home.

That night the valley was aroused and talking of the terror, the devil, the demon bear.

Mrs. Sarcy was aroused that night by a noise in the room in which the children slept, which adjoined her own. She arose from her bed and stepped to the door. To her horror she saw a great black bear standing beside the bed in which her children slept.

She stepped swiftly into her own room, and caught up her husband's rifle. She knew how to shoot. She raised the rifle to her shoulder, and pulled the trigger.

"Sallie, don't shoot any more; you have killed me!"

It was Sarcy, her husband, and he had been fatally hit. She was at his side at once, screaming in agony.

Sarcy lived until the next day, and before he died he told a marvellous story of his mental suffering.

"For a long time before the mania seized me," said the dying man, "I had been thinking I was a bear."

This delusion grew on the man until he could find no relief except by going into the woods and acting like a bear for several hours. After a jaunt of this kind he would return home quiet. When he found he could no longer control himself he left his home, went into the woods and killed a bear, and arrayed himself in the animal's skin. In this way he hoped to cure himself of his malady.

In his lucid moments he greatly desired to see his wife and children. He recalled seeing his wife at the spring--as a dream. He could not remember having chased the children, nor did he know anything of the death of the Mexican girl.

He often watched his own children at play from a safe retreat near his home. He had lived on berries and roots, and he remembered that he had often enjoyed eating raw meat.


The moral of this story is: Whenever you have the urge to reinvent yourself as a bear, keep it as a hobby. Don't try to turn professional.

[Note: Thanks to Twitter's @Litrvixen for bringing this clipping to my attention. I seem to be crowdsourcing the blog these days, which can only be an improvement.]
Posted by Undine at 4:33 AM