The Story of a Disappearance and an Appearance; or, A Warning to the Curious 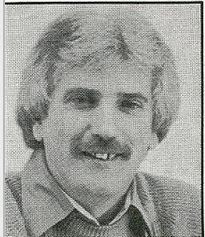 The disappearance of Keith Reinhard has an uncanny resemblance to many of M.R. James' ghost stories: Man visits remote town, becomes obsessed with a sinister local mystery, and then his curiosity winds up bringing him much more than he bargained for...

And also like many of James' stories, the ending to this tale is left largely to the reader's imagination.

The 49-year-old Reinhard was a sportswriter for the "Chicago Daily Herald." He lived with his wife of two years, Carolyn. He was well-to-do, had a pleasant job, and seemed to have everything that would make him content with life.

Reinhard, however, was dissatisfied and restless. In fact, he seemed to be going through a classic mid-life crisis. A long-time friend of his, Ted Parker, was living in Silver Plume, a tiny town in the Colorado Rockies, and Reinhard suddenly found himself envying his friend's rustic, uncomplicated lifestyle. In June of 1988, Reinhard announced to his wife that he was taking a leave of absence from his job and moving to Silver Plume--alone. In these bucolic surroundings, he would open an antique shop, write a novel,"find himself!"

Carolyn probably did a bit of wifely eye-rolling at this news, but seeing that he had his heart set on this quixotic dream, she agreed to let him give it a try.

In Silver Plume, Reinhard rented an unused store front owned by Ted Parker. The reason for this property's availability was because the previous lessee, a man named Tom Young, had vanished in September 1987, after telling friends that he was planning a trip to Europe.

As so often happens, Reinhard soon found that his dreams were no match for reality. There was not much of a market for antiques in that sleepy, somewhat run-down area of the Rockies. The day-to-day drudgery of running a shop bored him. He was not doing any better with his Great American Novel. Creative satisfaction was proving to be just as elusive in Silver Plume as it was in Chicago.

As his new business ran into difficulties and his writing stalled, Reinhard became more and more interested in the disappearance of Tom Young. He extensively questioned Parker and other locals about the mystery, keeping detailed notes about what he was learning. He was planning a new novel--one based on the Young mystery. As Reinhard dug deeper into the case, he seemed to start to identify with this missing man whom he had never even met. The lead character of his novel was going to be a compilation of Young...and himself.

On July 31, 1988, local elk hunters made a shocking discovery in the mountains outside Silver Plume: the long-dead body of Tom Young, sitting propped up against a tree. The corpse of his dog, Gus, was lying next to him. They had each been killed by a shot to the head. A pistol and a small backpack were found next to them. Although, through unaccountable incompetence, ballistics tests were never done on the gun, it was assumed that it had been the weapon that killed Young and his dog, and his death was ruled a suicide. However, no explanation was ever found why Young would not only kill himself, but murder his beloved pet.

Although the mystery of Young's whereabouts was finally solved, many felt that his death remained an enigma.

On August 7, 1988--just one week after Young's body was found--Reinhard went out for a walk. Along his way, he ran into several friends. He invited them all to go for a hike with him later in the day to nearby Mount Pendleton, but they all declined. At about 4 pm, he set out for the mountain, alone. He had no backpack, warm clothing, or other supplies, indicating that he was planning only a brief excursion. Considering that the hike to and from the mountain would take at least six hours, this late hour for departure seemed odd, especially since he had tried to climb the mountain before, but had found it too strenuous.

Reinhard has, to date, never been seen again. Multiple search and rescue organizations--including search dogs and air patrols--failed to find the slightest trace of him. The tragedy was compounded on August 12, when a Cessna that was participating in the search crashed, killing the pilot and severely injuring the passenger. The search for the missing sportswriter was terminated the next day.

There are many theories regarding Reinhard's fate. Did he fake his own disappearance, giving him a clean start at attempting to reinvent his life one more time? Although there have been various alleged "sightings" of him over the years, authorities have not given any of them much credibility. Carolyn Reinhard and other family members strongly deny any suggestion that he would voluntarily abandon his loved ones.

Another scenario is that he planned only a short disappearance, as a joke on his friends. But then, when someone was killed looking for him, fear of being blamed for this death--as well as being stuck with the enormous cost of the search operation--persuaded him to make his vanishing a permanent one. It is a colorful story, but implausible.

Suicide? Everyone who knew Reinhard described him as an essentially happy nature, who was deeply devoted to his loved ones. Killing himself seemed entirely out of character. And if he was planning a suicide, why did he try so hard to find someone to accompany him on his mountain hike?

The bizarre fact that Reinhard, who had become so fascinated with a disappearance, should himself vanish into thin air has naturally received much scrutiny. Were these dual disappearances merely a coincidence? Or were both men murdered, perhaps because they both had learned too much about somebody or something? Although that is an intriguing idea, no evidence whatsoever has surfaced to support it.

Or--to take the most prosaic explanation--did the out-of-shape Reinhard merely have a terrible accident while trying to climb the dark, forbidding, treacherous mountain? Did he slip and have a fatal fall, leaving his body hidden somewhere in the rough, difficult-to-search terrain? Or was he eaten by a mountain lion?