Captain King and the Golden Needle 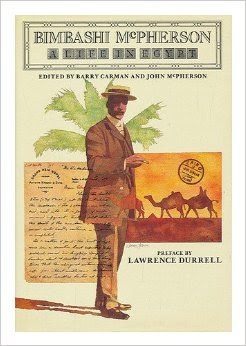 Joseph McPherson was an Englishman who lived in Egypt as a British security chief from 1904 until his death in 1946.  In 1983, his letters were published under the title of "Bimbashi McPherson: A Life in Egypt." In one of these letters, McPherson briefly described the illness and death of a Captain King. It is one of the eeriest deaths I have ever read about. McPherson's description reads more like a passage in a Victorian Gothic novel than anything from real life.

McPherson stated that early in 1918, King was found on a seat in Cairo's Esbekieh Gardens, "in a semi-somnolent condition, as though drugged or bewitched...The doctors found no lesions, no indication of a blow, no trace of poisoning, nothing to account for his condition, which persisted, and aggravated. He was in no pain, and all his faculties were normal, except that he seemed unable to rouse himself, or to take the least interest in people or things around him." When spoken to, King merely stared blankly and said, "She scratched my eye with a golden needle, and gave me second sight."

McPherson wrote, "Time brought no improvement, and after many days, he became feverish and delirious, repeating the above words, and those only, innumerable times.

Those were the last words King ever said. Soon after this, he died.

McPherson described how he discussed King's baffling end with a Colonel Russell. Neither man had ever heard of any Eastern custom or superstition that could account for what had happened. Russell told him that King's autopsy had failed to explain why he died. However, photos of the body showed a "mark like a scratch" on the corner of one eye.

McPherson made efforts to investigate the mystery. He visited "clairvoyants, alchemists, spiritualists, Druzes, Chaldeans, Persians, weird people from all sorts of weird places, but never elicited the smallest explanation." His inquiries about King's life and associates showed him to be a "normal, pleasant, sporting officer, a moderate drinker, never suspected of drugs, not unduly interested, as far as his friends could judge, in hypnotism, spiritualism, or occult matters. He had a rather conspicuous weakness for women, especially 'Gyppy girls,' as his officer friends dubbed them; and he had been seen, several times recently, driving in his dogcart with a lady in eastern attire--young and beautiful as far as her gauzy white yashmak allowed those who saw her to judge. He had taken a lot of chaff about this 'camarade,' good humoredly, but without taking anyone into his confidence."

McPherson tried to trace this woman, but was unable to find anything more about her. He sighed that "neither I nor, as far as I know, anyone has obtained the smallest clue to King's mysterious illness and death."

It's safe to say no one ever will.

[Note: Many, many thanks to John Bellen for bringing this unjustly obscure slice of The Weird to my attention.]
Posted by Undine at 4:45 AM