The Ghost of Wizard's Clip 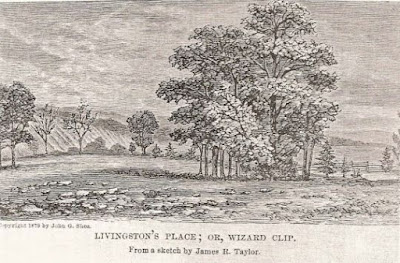 One of America's earliest recorded poltergeist cases took place in a West Virginia village called Middleway, but ever since, the town has become best known, for reasons that will become apparent, as "Wizard's Clip." The most lengthy account of the case comes from the memoirs of Demetrius Galletzen, a Catholic priest who witnessed much of the phenomena first-hand, and was said to have been permanently unnerved by them.

Our story opens around the year 1790, when a Pennsylvania farmer named Adam Livingston moved to Middleway, acquiring a handsome house and some seventy acres of land. He brought with him his wife and seven children. Livingston had a sterling reputation as honest, hard-working, and hospitable.

Life was uneventful until around 1794. According to legend, a traveling stranger--whose name is lost to history--took lodgings at Livingston's farm. Unfortunately, soon after his arrival, the boarder fell seriously ill. Feeling death approaching, he confided to Livingston that he was a Catholic, and begged him to summon a priest.

For all Livingston's virtues, he was also, unfortunately, a religious bigot. As a fervent Lutheran, he could not countenance the idea of a "Papist" under his roof, and sternly denied the man's last request. His lodger died without the comfort of his religion.

Whether this story of the Catholic boarder is true or not, something happened to cause all hell to break loose at the Livingston farm. It began with the sound of horses galloping madly around the home. When Livingston went outside to investigate, he saw nothing.

But the sound continued.

A few days later, his barn mysteriously burned to the ground, killing all his cattle. Invisible hands threw all the crockery in the house to the ground, smashing them into pieces. Money kept in the house vanished. Someone--or something--decapitated his turkeys and chickens. Chunks of burning wood would suddenly fly out of the fireplace, necessitating constant vigilance lest they burn the house down. Then came the Ghost Scissors. Although nothing could be seen, the sound of large shears could be heard in the house, leaving blankets, clothing, shoes, curtains, etc., full of holes in the shape of half-moons and other odd designs.

As word spread of these inexplicable happenings, the Livingston farm inevitably became the leading local tourist attraction. Some lookyloos got a more interactive visit than they had planned. One lady from a neighboring town took care to put her new silk cap into her pocket before she entered the home, to save it from being clipped.

Angry ghosts aren't foiled that easily. When the visitor exited the house, she took her cap out from its hiding place, only to find that it had been slashed into ribbons.

Three young men who had openly scoffed at reports of the phantom got Livingston's permission to spend the night in his house. They'd show everyone there were no such things as ghosts!

No sooner had they settled in for the night when in front of their eyes a large stone flew out of the fireplace and spun madly around like a top.

That was enough for the three bold skeptics. They fled the house, never to return.

Livingston was not sleeping, not eating, and his mind was so tormented by these spectral shenanigans that his health began to fail. In desperation, he went to three different professional "conjurors," who proved to be no match for the spooks. He then approached his minister, Rev. Christian Streit, for assistance. Streit did a bit of buck-passing, offering the unhelpful words that the power to exorcise malevolent spirits "existed only in olden times, but was done away now." An Episcopalian minister tried his hand at dealing with the ghost, only to be "famously abused by the spirit," who tossed his prayer book into a chamber pot. A Methodist minister had rocks thrown at him.

Soon after this latest failure, Livingston had an unusually vivid dream. He saw himself climbing a high mountain. It was a hard, dangerous climb. When he finally reached the summit, he saw a man dressed in robes, and heard a voice saying, "This is the man who can relieve you." He believed this robed figure was a Roman Catholic priest.

The next morning, he made inquiries, hoping to track down the man in his vision. His search led him to a neighboring Catholic family, the McSherrys. They in turn introduced him to their priest, Father Dennis Cahill. Livingston immediately recognized him as the man in his dream. At first, Father Cahill laughed, saying that the "supernatural" activity must be the work of mischievous neighbors. However, Livingston's distress was so compelling, Cahill was finally persuaded to go to the harassed man's home and investigate the matter for himself. He found Livingston's story corroborated not just by his family, but by the many townspeople who had seen the odd phenomena for themselves. Cahill sprinkled the farm with holy water, which appeared to enable the ghost to rest in peace.

For a while, at least. After a brief period of quiet--presumably, even poltergeists have to take a vacation from time to time--the otherworldly pest returned, as troublesome as before.

At this point, Father Gallitzin entered the picture, trying an exorcism of his own. He heard "the rattling and rumbling as of innumerable wagons..." which so terrified him, he fled. Cahill, who was of a more "truculent" nature, was brought back for another try. He celebrated a mass in the home, and the clipping, stone-throwing, and other paranormal abuses finally ceased. In his grateful relief, Livingston converted to Catholicism. (His wife Mary Ann, however, was considerably less enthusiastic about changing religion. She sardonically referred to herself as "Judas." )

This was far from the end of the story. Livingston's conversion just brought the family a different sort of spiritual nagging, which, while of a more benign variety, was probably just as irritating. Every night, the household was visited by a blinding white light, along with a voice that took it upon itself to give the family instructions in Catholicism. No one ever learned the identity of this "voice," although it claimed that it had once been a living person. The voice emphasized the need to pray for those trapped in Purgatory. The screams of these damned souls were heard regularly by the family. The spirit also foretold the future, giving Mrs. Livingston the cheery news that she was destined for Hell if she did not fully embrace Catholicism.

The family's uninvited spiritual leader was an authoritarian sort. It once shattered a mirror as a way of chastising the supposed vanity of the women of the household. On another occasion, it made a priest's horse invisible, preventing him from reaching the bedside of a dying woman to give her absolution. The voice said this was to teach a lesson about repenting at the last minute. After a while, the voice was joined by a visible spirit, a barefoot, ragged young man who told them, "I am going to my father, and I have come to you to teach you the way to him." He spent a few days lecturing the Livingstons about the intricacies of Catholic doctrine, and giving bloodcurdling reports about all the souls who were tortured by eternal hellfire for following the teachings of Luther and Calvin. (These words were evidently directed to Mrs. Livingston in particular.) He then vanished.

In 1809, Livingston sold his farm and moved back to Pennsylvania. The "spirit" apparently declined to follow him, and was heard of no more.

[Note: In September 1798, Mary Ann Livingston sent a letter to the "Potomak Guardian," where she gave her own version of events. She wrote, "I now take the liberty of stating to the Public, that the trouble still remains in the Livingston family, at times, in a greater or less degree, in despite of Priestly art. Whatever it is, it is wonderful and unaccountable, to the most penetrating mind. But what is most unhappy for me, it, aided by Priestcraft, has been the means of secluding me from the business of my family, the embraces of an affectionate husband, and fixed me as the object of public contempt. However, it is finally thought, if Priests and Spirits could frighten me to relinquish my claim to my lawful thirds of Adam Livingston's estate, the Public ear would be no longer thus amused, but this I leave for time to prove." In 1802, Mrs. Livingston did give up her control over the property, but we do not know why. It was among the 34 acres of land her husband deeded to the Catholic Church. The area is now known as Priest Field Pastoral Center.

Unfortunately, we know no more about this matter, but it does put an even more sinister spin on our story.]
Posted by Undine at 4:52 AM