Paris.—An elderly lady dressed in black recently asked to see the magistrate of the Ste. Marguerite district privately, and on being shown into his room said: “At the risk of being taken for a mad woman, I must inform you that no sooner do I enter the flat in which I live with my grown-up son and my brother, than I am compelled by some kind of magnetic influence to walk about on my hands with my legs in the air.” Before the magistrate knew what she was going to do, the lady, whose name is Mme. Blerotti, attempted to give a practical demonstration of what happened in the flat. Supposing that he had to deal with a lunatic, the magistrate detained the lady and sent a policeman to her address in the Rue de Montreuil. The policeman returned with the lady's son, a commercial clerk 27 years of age. “What my mother has told you is perfectly true," he said. “I do not pretend to explain it. I only know that as soon as my mother, my uncle and myself enter the flat we are immediately impelled to walk on our hands.” 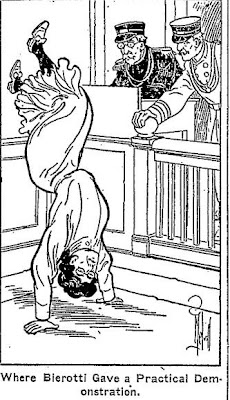 The third occupant of the flat, M. Paul Reiss, aged 50, was fetched. “It is perfectly true,” he said; "everybody who enters our rooms is afflicted by the malady. Every time I go in I am irresistibly impelled to walk about on my hands—so,” and suiting the action to the words, M. Reiss threw himself on all fours and then began to walk about on his hands. The young clerk began to follow his example, and Mme. Blerotti, herself, who had been brought back into the magistrate's room, joined in the general topsy-turviness.

The concierge of the house was then fetched. “To tell the truth," he said, “I thought that my tenants had gone mad, but as soon as I entered the rooms occupied by them I found myself on all fours and endeavoring to throw my feet in the air.” The magistrate came to the conclusion that everybody in the house was afflicted with some curious kind of malady, and ordered the whole floor to be disinfected by the municipal authorities. The applicants went away perfectly satisfied.

There are no follow-up stories in the papers, so I assume either the clean-up job chased off the whatever-it-was in the building, or the press simply decided that Madame and Company were just too weird for anything outside the likes of this blog.  There seems little for me to add except this:


"If buttercups buzz’d after the bee
If boats were on land, churches on sea
If ponies rode men and if grass ate the cows
And cats should be chased into holes by the mouse
If the mamas sold their babies
To the Gypsies for half a crown
If summer were spring
And the other way ’round
Then all the world would be upside down!"

Email ThisBlogThis!Share to TwitterShare to FacebookShare to Pinterest
Labels: Newspaper clippings, paranormal, The kind of thing that happens when buildings turn prankster