Of the day? Bloody hell, probably the newspaper story of all time. Ladies and gentlemen, let me present to you a harrowing unsolved mystery from Downey, California in 1955: The Case of the Demon-Possessed Garden Hose:

It all began when about 18 feet of green plastic garden hose disappeared into the ground in Mr. George Di Peso’s back garden.

Scientists from California Institute of Technology are on their way to inspect the last remaining few feet of Mr. Di Peso’s home, the activities of which have already baffled police and engineers of the local water company.

Even an amateur prospector with a Geiger counter couldn’t unravel the mystery of where the hose has been going.

The Di Peso’s had a restless weekend. “It’s horrible,” said Mrs. Di Peso. “We can’t get any rest. There was a woman sitting out here most of the night, and every once in a while she’d scream ‘It’s wiggling; it’s wiggling.’

“There were people here all night. Once, I looked out and saw 14 couples, dressed in evening clothes, standing on our lawn.”

Mr. Di Peso has had to rope off his lawn to protect the flower beds from trampling feet.

One enterprising tradesman set up a hot dog and coffee stand, while extra police were sent to the Di Peso home to handle the ever-growing crowd.

A neighbor, Mrs. Robert Breeze, said that her own hose had started to disappear into the ground last Friday, but her husband had cut it off after 15 feet had vanished.


They never did figure out how that hose managed to bury itself, or why they were completely unable to pull it back up.  Di Peso finally just cut it off at ground level, declaring, “If it wants to sink down and disappear completely, my prayers go with it.” However, the burial site continued to get such a stream of gawkers that two months later, he dug a hole twenty-five feet deep and excavated the renegade implement.  “I think I’ll keep it for a pet,” he said. 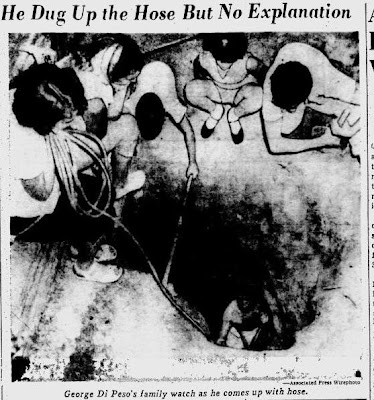 The following week, the hose strangled Di Peso in his sleep.

Okay, I never found that last bit in the news archives.  But I'm pretty sure that's what happened.
Posted by Undine at 5:10 AM