So, what do you get when you add together bigamy, adultery, disappearances, suspected murder, insurance fraud, and Mystery Corpses?

All this story needs is a talking cat.

Our story centers around a Rutland, Vermont couple: George and Catherine Packard, both aged 21. Unfortunately, their marriage was not a happy one, and the relationship came to a startling and abrupt end when Catherine suddenly disappeared in April 1929. George did not seem particularly perturbed.

No further developments occurred until August 20, 1929. On that date, Robert Field, a farmer in Chester Township found something unexpected in his pasture: a woman's badly decomposed corpse. Medical authorities were able to determine that this had been a woman in her early or mid-twenties. She was 5' 4", had long brown hair, and weighed about 110 pounds. The woman had a distinctive and unfortunate dental history: two teeth were gold-capped, and no less than twelve of them had been removed. She had been wearing a tan coat, a sweater, a pink silk dress, silk underwear, rolled stockings, and black shoes, along with a couple of pieces of cheap costume jewelry. A purse was nearby, but all it contained was 38 cents, an unopened bottle of iodine, and a note reading, "I am sick of life and I am going where I will be happy." The cause of death seemed sadly obvious: she was lying next to a half-empty bottle of chloroform. 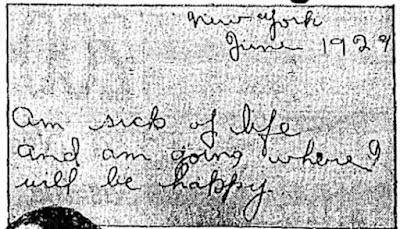 Local officials had little difficulty ruling the woman's death a suicide. But who was she? Although the case received wide publicity throughout the state, no one offered any clues to the dead woman's identity, and the corpse remained unclaimed. After a week, Chester officials gave up and had her buried in the local potter's field.

The third act of our little tale came in June 1930, when George Packard paid a visit to Chester's sheriff, Ernest Schoenfield. Packard explained that he had only recently heard of this unidentified corpse, and he suspected it might be his long-missing wife. He showed Schoenfield a photograph of Catherine. After examining photographs of the body and the items found at the scene, he declared that the dead woman was indeed Catherine Packard. However, he insisted that she must have been murdered, as she was a deeply religious woman who would never have resorted to suicide.

It soon emerged that George had some very practical reasons for wanting his wife declared dead. His mother, Mary Agnes Packard, had insured Catherine's life for $459, and she now wanted the John Hancock Mutual Life Insurance Company to pay up. Unfortunately for the Packards, John Hancock showed a dishearteningly cynical attitude. The company refused the claim, on the grounds that there was a "reasonable belief" the body was not that of Catherine Packard.

George found a romantic compensation for this financial blow. Three weeks after he declared himself a widower, he married one Margaret MacFarland.

At this point, a new figure entered the story: Mabel Abbott, a woman who had known Catherine for years. She was as skeptical as the insurance company that the woman who lay in the potter's field was the first Mrs. Packard, and she was determined to prove it. In August 1930, this amateur sleuth received information that Catherine was in Manchester, New Hampshire. When Abbott went to this city, she quickly tracked down the missing woman, who was now working as a housemaid. Catherine professed astonishment to learn that she was considered to be long dead and buried, and readily agreed to return to Vermont.

Unsurprisingly, the newly-married George was less than pleased to see Catherine return from the grave. He prudently hired an attorney. This domestic dilemma was rapidly settled in a Vermont courtroom: it was agreed that George and Catherine would divorce. At the same time, Margaret would annul her now-bigamous marriage, she and George would legally remarry, and the trio would all go on to live happily ever after.

Well, not quite. The newspapers were not nearly as eager to drop the story, especially when Mary Agnes Packard--understandably peeved over the loss of her four hundred bucks--began to dish the dirt on her former daughter-in-law. It turned out that Catherine had been on quite the road trip. In April 1929, she had abandoned her husband (not to mention their two children) and went to Cleveland, Ohio. There, she met up with a "friend" of George, an ex-con named Robert King, who evidently amply deserved his nickname of "Romeo."

The illicit pair settled briefly in Erie, Pennsylvania, but after Robert lost his job there, they hit the road, a journey that was sadly interrupted when Romeo's truck was repossessed. After that episode, the lovers had a falling-out. Catherine--who appears to have developed a taste for walking out on her men--dumped King and hitchhiked to Manchester, where she found domestic employment.

The Packard gang soon learned that their legal troubles were far from over. Catherine's reemergence naturally led police to reopen the investigation into that dead woman, and the authorities treated all the Packards as material witnesses. Although George and Catherine stoutly denied knowing who the woman was, there was the tricky fact that the "suicide note" found with the corpse was in Catherine's handwriting. Catherine reluctantly admitted writing the note--being married to George drove her to frequently contemplate killing herself--but she stubbornly stated that she had no idea in the world how it wound up in this stranger's purse. Law enforcement eyebrows were also raised by the fact that the photograph of "Catherine" George had shown Sheriff Schoenfield was not of his wife at all, but an entirely different woman, one of Catherine's former co-workers.

In September 1930, George and Catherine's divorce was granted, which was speedily followed by his remarriage to Margaret. Despite this nod to respectability, George and Catherine were charged with adultery. Catherine was sentenced to six months, while her ex-husband received one-to-three years. It sounds very much like the authorities strongly suspected that the Packards knew more about the mysterious dead woman than they were willing to admit. As the law did not have sufficient evidence to charge the pair with more serious crimes, police settled for the consolation prize of jailing them for these lesser charges.

You will perhaps not be shocked to learn that while George's second marriage was lengthier than his first, it was no happier. In 1953, Margaret divorced him on the grounds of "intolerable severity." Soon after serving her sentence, Catherine also remarried...to none other than George's father, 64-year-old Horace Packard. It was a fitting coda to this odd slice of Vermont Gothic.

As for the dead body who had so briefly impersonated Catherine Packard, dozens of people came forward, suggesting the woman was some long-lost female relative, but proof was lacking of any of these claims. The state attorney, Lawrence Edgerton, was convinced that the corpse was that of Ruby Chickering Green, a nurse who had disappeared in November of 1926. Green matched the woman's physical description, right down to the many missing teeth, and her handwriting bore a striking resemblance to Catherine Packard's. She had even once worked in Chester. Ruby's life had been a sad one: after her husband was jailed on a morals charge, their children became wards of the state, leaving Ruby to drift aimlessly from one low-level job to another. Given her history, it was not implausible that Ruby had sought to escape her dismal existence by committing suicide. On the other hand, Sheriff Schoenfield believed the woman was Charlotte Moore Buswell. Buswell had become involved in drug-dealing and bootlegging--two professions not conducive to a long and peaceful life--before her unsolved disappearance in 1925.

These theories, however, went unproven. Nowadays, DNA analysis would help to solve the riddle, but lacking such tools, the authorities did not think it was worthwhile to even exhume the corpse for further examination. The woman's identity--not to mention the question of how she came to lie in Robert Field's pasture--seems destined to remain a mystery.
Posted by Undine at 4:40 AM