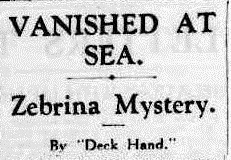 I suppose the Zebrina can best be described as "Mary Celeste Redux." This account of her mysteriously ill-fated crew appeared in the "Sydney Morning Herald" for April 12, 1941:

According to recent cables, a 200 ton ship crossed the Irish Sea without a crew, and with her engines running, berthed herself in an inlet on the West Coast of Britain,with only an inch to spare from dangerous rocks. The vessel had caught fire and had been abandoned by the crew when the flames gained control. This strange happening recalls one of the most puzzling sea mysteries of the last war--a mystery as baffling as the more famous case of the Marie Celeste.

This was the strange affair of the British schooner, Zebrina. which, on October 17, 1917, was found drifting off Cherbourg (France), undamaged in any way, with all sails set, but without a soul on board, although the tables were prepared for a meal for the crew. No trace of the ship's complement was ever found and their fate remains unsolved.

The Zebrina was of sturdy oak. built at Whitstable in 1873. Rigged as a three masted fore-and-aft schooner, the vessel was 109 feet long, with a registered tonnage of 185 tons gross, and capable of carrying about 300 tons of cargo. In 1917 she was one of the many vessels engaged in transporting coal from Falmouth to the French port of St. Brieuc, south of Cherbourg. At the time the Zebrina was under the command of Captain Archibald Martin, the other members of the crew being four British seamen,W. H. Beck, W. F. D. Bourke, M. Faus, and G. Steward.

On the afternoon of October 15. 1917, the vessel, fully loaded with coal, left Falmouth and set sail for St. Brieuc a voyage which she usually covered in about thirty hours. On this occasion, however, the Zebrina never reached her destination. Nothing was heard of her until early on the morning of October 17, when the French authorities found her derelict in the English Channel outside Cherbourg.

To the amazement of the naval party, the Zebrina was found to be in perfect condition, but every member of her crew was missing. She swung idly about with all her sails set and flapping. The sea was flat-calm, and in the cabin was a table set for a meal that had been partly prepared. The galley fire was still burning.

But no trace of the missing crew could be discovered. The men's clothing and other personal belongings were still on board; the ship's papers and log book had not been removed; and the only lifeboat that the vessel carried still swung in its davits. Completely mystified by their discovery, the French authorities had the vessel towed to Cherbourg, where, after the coal had been removed, the schooner was closely examined by marine surveyors. She bore not the slightest damage anywhere, and was not even leaky!

Although at first it was presumed that the missing men might have fallen victims to a German U-boat, there was no evidence to support this theory. If the vessel had been stopped by a U-boat she would have been blown up, as so many other ships engaged in transporting coal to France had been destroyed when stopped by enemy submarines. Other evidence against the U-boat theory was the fact that the Zebrina's papers and log book were still on board. The German submarine commanders were under strict orders to take back the papers of the ships they destroyed, so that there would be indisputable evidence as to their activities: when they boarded a vessel or signalled the captain to come off, the ship's papers were the first things they demanded.

A more logical theory is that the Zebrina was caught in the severe gale which swept through the English Channel on the night of October 16. It is believed that the five men may have been all on deck, attempting to keep the heavily-laden vessel's head to the wind, when a giant wave broke on board and swept them all overside into eternity.

After the war a memorial was erected to the crew at Trinity House, London.


According to most accounts, the ship was found aground on the French coast, not adrift, although that detail does nothing to help explain what happened to the crew.  The Zebrina still ranks as one of the 20th century's most well-known mysteries of the sea.
Posted by Undine at 4:37 AM