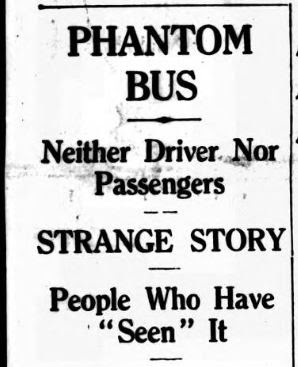 
A brilliantly-lighted motor-bus roaring through the streets of Kensington without driver or passengers; a bus which stops for passengers and suddenly vanishes when one tries to board it. Residents in the North Kensington district were excitedly discussing these remarkable "phenomena" last night following a reference to a ghost bus at a London inquest on lan James Steven Beaton, metallurgical engineer, of Dollis Hilt, who died following a collision at the corner of St. Mark's-road and Cambridge-gardens.

Replying to a question whether this was a place where a ghost bus was stated to have been seen, one of the witnesses replied, "So some of them say."

A Birmingham Gazelle representative discovered last night that the legend of the phantom bus is well-established in the neighbourhood.

"The legend of the phantom bus has been going strong for years," said a woman resident in Cambridge-gardens. "I have never seen it and I have never met anybody who has, but the version I heard was that on certain nights, long after the regular bus service has stopped. people have been awakened by the roar of a bus coming down the street.

"When they have gone to their windows they have seen a brilliantly. lighted double-decker bus approaching with neither driver nor passengers.

"According to this story, the bus goes careening to the corner of Cambridge-gardens and St. Mark's-road, and then vanishes.

A number of accidents have happened at this corner, and it has been suggested that the phantom bus has been the cause."

Quite another version was told by Mr. William Hampton, a motor mechanic, of St. Mark's road.

"The story of a ghost bus," he said, "seems to have originated in an experience related by a woman more than two years ago.

"According to her account she was alighting from a bus at the corner of the road, intending to catch another bus to her destination. She asked the conductor which bus she ought to take and he pointed to a bus which was standing a few yards away.

"She approached the bus and was about to board it when it vanished into thin air.

"Ever since then, this story of a ghost bus has been prevalent in the neighbourhood."

Local authorities eventually had the road repaired and straightened, after which the "ghost bus" was seen no more.
Posted by Undine at 4:33 AM