The Murder Chain of Auchindrayne 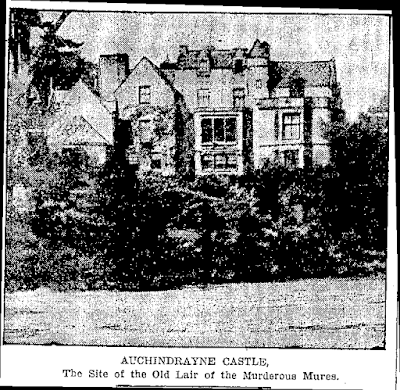 Because everyone loves quaint, heartwarming slices of family history from the good old days, let me introduce you to John Mure, Laird of Auchindrayne, a man with a memorable formula for handling personal issues.

Mure flourished during the time when King James VI sat uneasily on the throne of Scotland, impatiently waiting for Good Queen Bess to finally die so he could become James I of England. In Mure's district of Carrick, in Ayrshire, the Kennedys held sway. They controlled all local social and political affairs with a good deal more power than the distant, and largely despised, central government of the country. A contemporary history tells of how the current head of the Kennedy clan, Gilbert, Earl of Cassillis, (aka "The King of Carrick,") took a fancy to the rich Abbacy of Glenluce, and determined to get it into his own possession. His method of doing so involved hiring a monk to forge the necessary papers proving Cassillis' rightful ownership of the Abbey. In order to ensure the monk's silence about this unconventional transaction, Cassillis had him murdered. He then saw to it that the murderer kept quiet by having the hired assassin charged with theft, and quickly executed. John Mure, as we shall see, brought this system of evading justice to new heights of glory.

In time, the Kennedys grew bored with fighting rival clans, and took exuberantly to trying to wipe each other out. The main intra-family feud was between Sir Thomas Kennedy of Culzean and the Laird of Barganie. The dispute was ostensibly over the ownership of certain lands, but in truth, Scottish noblemen of those times needed little reason to fall violently out with each other.

Mure had married into Barganie's immediate family, so he decided to strike a blow for his in-law's cause. (He also had a personal grudge against Culzean, who had deprived him of the office of the Bailiary of Carrick.) And, naturally, he meant "strike a blow" quite literally. On New Year's Day 1597, Mure gathered together some of his followers and ambushed Culzean. Unfortunately for Mure but very luckily for Culzean, he launched his attack with more vigor than skill. Mure's prey escaped the melee unscathed.

Well, one can't start new feuds until you end the old ones. Neutral forces managed to patch up a truce of sorts between Mure and Culzean, with this burial of the hatchet cemented by a marriage between Culzean's daughter Helen Kennedy and Mure's eldest son James. All was peace, love, and flowers.

Anyone with even the slightest familiarity with Scottish history can guess how long this lasted. The trouble was reignited when Barganie died and his son, Gilbert Kennedy, took over as head of that branch of the family. Mure convinced the new Laird of Barganie that he, Gilbert, was the rightful head of the Kennedy clan. As a result, the new Laird hatched numerous attempts against Cassillis' life. In December 1601, Cassillis--apparently more angered by some breach of family etiquette of Barganie's than by these murder plots--launched his own surprise attack on Barganie and Mure. This battle left Barganie dead, and Mure severely injured by "ane verie dangeous schot in the theigh." After he recuperated, Mure attempted "daylie ambushes" against Cassillis, but these efforts proved maddeningly ineffective. Frustrated by his failure to kill Cassillis, Mure resolved to gain a consolation prize in the death of Culzean. Peace treaty or not, Mure still held a grudge.

In May 1608, Culzean set out on a business trip to Edinburgh. A "puir schollar" named William Dalrymple was sent to give Mure a message suggesting that Mure meet Culzean along the way near the town of Duppill and let him know if there were any errands he should do in the capital on Mure's behalf.

Now, although Culzean had not taken part in Cassillis' attack on Barganie, Mure suspected he had been privy to this murder. He had long meditated the proper revenge for his relative's death, and saw this as the perfect opportunity. He told Dalrymple to tell Culzean that he, Mure, had not been at home to receive this message. He then let one of Barganie's brothers know where Culzean could be found off his guard and defenseless.

The result of this kindly hint was that Culzean never made it to Edinburgh alive.

Culzean's actual murderers were outlawed, but although everyone suspected Mure was behind the killing, they lacked the direct evidence to charge him with the crime. The only thing that could tie Mure to Culzean's death was if William Dalrymple ever decided to talk. Naturally, Mure was anxious to ensure Dalrymple's mouth was shut forever.

Mure kidnapped the young "schollar" and packed him off to fight in the wars then raging in the Netherlands. He saw this as the perfect way to ensure Dalrymple did not make old bones, without the hazard of killing the young man himself.

Alas, Dalrymple proved to be a better--or luckier--soldier than Mure had expected. In September 1607, he returned to Scotland, alive, well, and with blackmail on his mind. Messy though it might be, Mure decided there was nothing for it but to kill the troublesome fellow himself. Mure cagily let Dalrymple believe he was willing to negotiate a cash settlement, and arranged a secret meeting with him on the beach of Girvan. He took with him a couple of his sons, as well as a James Bannatyne. Dalrymple really should not have been surprised when this meeting ended early, with his murder.

Mure and his assistants tried burying the young man in the sands, but the tide was coming in. It proved impossible to dig a body-sized hole without it immediately filling up with seawater. Finally, in exasperation, they simply flung the body into the waves and prayed the currents would carry it to sea where it would disappear forever.

Mure was an enthusiastic murderer, but, again, he proved to have little talent for the job. A week later, Dalrymple's body was washed ashore. It was soon identified, and Mure's known efforts to keep the young man out of the country quickly made him the prime suspect in the death. The corpse "bled" in the presence of Mure's six-year-old granddaughter, which was seen as indisputable proof of his guilt.

Mure's kinsmen saw nothing wrong with slaughtering each other in open hand-to-hand combat, but this cowardly and brutal murder of a defenseless youth disgusted them. It was considered to be bad sport.

Mure decided that the only way to save his reputation as an honorable upstanding citizen was to commit a more socially respectable murder. He and his men attempted to assassinate Hew Kennedy of Garriehorn, an adherent of Cassillis. Although his enemy survived the assault, it was enough to have Mure proclaimed an outlaw. While Mure was on the lam, he let it be known that he was perfectly willing to stand trial for the murder of Dalrymple if he was given a pardon for the attack on Garriehorn.

King James often showed a curious notion of justice, but this was too much even for him. Mure's offer was rejected. Mure was finally caught and hauled to Edinburgh, where he was imprisoned in the Tolbooth.

Once again, Mure and his son decided that the only way to avoid punishment for one murder was to commit a new one. They resolved that John Bannatyne, the only non-Mure witness to Dalrymple's death, just had to go. The Mures hired a man named John Pennycuik to kill Bannatyne. With a commendable talent for thinking ahead, they also enlisted a relative named Quentin Mure of Auchnull to get rid of Pennycuik when that assassin was done with his work. Quentin's eventual fate seemed obvious, but the Mures decided they would just deal with that when the time was right.

However, the Mures were interrupted in their plans for serially eliminating most of Scotland's population when Bannatyne got word of this plot. Sensibly figuring that the law was less dangerous than his former comrades, he went to the authorities and told all. In 1611, he and the two Mures, father and son, were put on trial for murder.

The Mures denied everything, even when put to torture. Considering that Bannatyne's testimony was the only evidence against them, the Mures may well have gotten away with it, if they had not, like so many other murderers, felt compelled to write self-incriminating letters. Old Mure attempted to send his son a note, which was intercepted by the Crown. We do not know exactly what this letter said, but it evidently contained enough damning words to hang the pair a dozen times. Thanks to this fatal correspondence, the Mures were convicted of Dalrymple's murder (the elder Mure was finally convicted of the killing of Culzean, as well.) While awaiting execution, an assortment of Bishops and Ministers were able to bring the Mures to confess their crimes, and show a suitable contrition. We are told the pair wound up being anxious to go to the gallows, in order to savor the "eternal joys" they were certain awaited them. Bannatyne was rewarded for his role of super-grass with the King's pardon.

Of course, anyone with a sense of justice and humanity is relieved that the Mures were finally stopped in their deadly tracks. However, a blogger with a taste for The Weird must also feel a slight twinge of regret that we will never know just how far the famous "murder chain of Auchindrayne" would have extended if the family had been given free rein.

[Note: Anyone wishing to read a fictionalized retelling of Auchindrayne's many misdeeds may wish to consult Sir Walter Scott's verse play "The Ayrshire Tragedy." It does not, however, really do justice to his illustrious subject.]
Posted by Undine at 4:48 AM