For this New Year's post, I offer a cautionary tale about the importance of inspecting your prospective bride or groom carefully.


The New Year's festivities at the usually quiet and unexcitable colliery village of Croxdale have been greatly enlivened by the discovery and public exposure of a well-contrived, and cleverly carried out matrimonial hoax.

It appears that for some time a certain very grave individual has been lodging at Croxdale-terrace, and working as a hewer at Croxdale colliery. He is a man past the prime of life--in fact, a grey-haired old chap--but his stylish mode of dressing, jaunty air, and open admiration of the fair sex, have made him quite conspicuous in the neighourhood. Being a regular attender at chapel and class, a constant reader of religious literature, and a very quiet, steady, and inoffensive person, it is not surprising that many of the lonesome widows and ancient spinsters of the locality cast wistful glances at him as they passed him on the road, or sat with him in the chapel. But none of these were to his liking. He wanted a young wife, and a pretty one, but having passed the Rubicon, the girls were shy of his grey head, beard, and whiskers.

Some five weeks ago, however, fortune seemed to favour him, for a pretty young woman looked at him so earnestly one night that he was sure she had been smitten by his appearance. She was in company with a young man who worked next board to him in the pit, but that circumstance only seemed to smooth the way for an introduction to the charmer. The next morning, therefore, "Gentle Johnny," as he is designated, inquired of the young man who the fine-looking girl was that he saw in his company the preceding night. Now, it so happened that the "fine-looking girl" was the wife of the young man, but for a lark he, like Abraham, said she is my sister.

Johnny, therefore, began to praise her good looks and nice manners, and asked his friend if he would mind introducing him to his charming sister. With an eye to further fun the young man promised to help him in the matter, but said he must first see if she was willing to accept him as a suitor, and then he would tell him when it would be most convenient to come to the house.

That night the young man, his wife, and a few friends concocted a plot to hoax poor Johnny, and let the public know that he was already a married man living apart from his wife. Next day Johnny was informed that his attentions would be acceptable, and he could have a first interview that evening, as the old folks were to be from home for a couple of hours. At the appointed time Johnny went to the house, dressed up in his broad cloth and kid gloves, with a grand silk umbrella in his hand. He was duly introduced, and the discreet brother very considerately withdrew, and left them to arrange matters. How Johnny conducted himself during the interview is now the subject of universal conversation at Croxdale.

The "young lady" at first absolutely refused to have anything to do with him, unless he would first shave off his whiskers and beard, which he promised to do before his next visit. She then promised to meet him at a certain hour on a certain night, dressed in a white shawlet, and have a moonlight walk with her devoted admirer. From this time forth Johnny and his "lady love" met regularly, and the couple might have been seen any night on the Darlington road beyond Croxdale, walking side by side, the arm of the swain fondly encircling the waist of his adorable mistress. Johnny was not so deeply smitten, however, but that he noticed some rather strange peculiarities in the manner and behaviour of his charmer. She wore very strong boots, for instance, and walked with a firm, vigorous step, like a female Weston, but she explained that she liked to keep her feet warm, and Johnny acquiesced with the trite remark that when the feet were warm we felt warm all over. Then she grasped his hand at parting with a grip that always brought the tears to his eyes; but Johnny put this to the warmth of her feelings.

Marriage was eventually proposed and the offer accepted. The ring was to have been bought last Saturday, and the ceremony completed by special license. But, alas for Johnny's peace of mind--they took their last walk on New Year's Eve. Johnny on that night was more affectionate and pressing in his suit than ever, but "the lady" reminded him that he would have to go home with her and ask the consent of her parents to the match. Nothing loath, Johnny expressed himself perfectly willing to do so, and the twain at once proceeded to the girl's domicile for that purpose. But the evening appeared to be inauspicious, as there was quite a large party assembled. Johnny, therefore, thought the time inopportune to prefer his request for the daughter's hand.

Not so, however, "the lady," for she stood forth, and informed the company that he had proposed to marry her, and she desired them all to bear witness to the fact, for she was now going to put his love to the test. Saying which, she proceeded to divest herself of her bonnet, fall, gloves, shawlet, gown, and other female attire, and presently stood before them in the form of a strapping potter lad, known as "Queer Tommy." It would be impossible to describe the scene which ensued upon this exposure. Suffice it is to say, that the would-be bridegroom eventually made his escape from his tormentors amid much merriment. 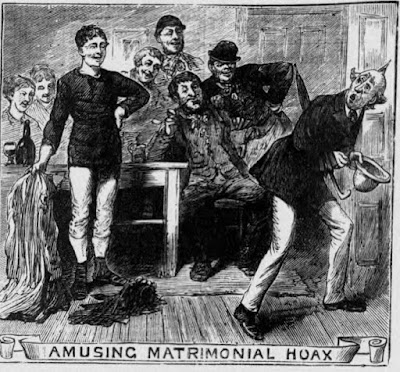 Since the above event was made public "Johnny" has been so unmercifully chaffed that he has threatened several people with personal chastisement; he has sought the protection of the local policeman, and got the viewer to give a general notice that any one interfering with him in future will be discharged from the colliery. It should, however, be known to all men and women, whom it may concern, that he is again cultivating his hirsute appendages, and presents a very grisly appearance in his woeful devastation.


My friends, may you never, ever, have an Illustrated Police News New Year's Eve.
Posted by Undine at 4:52 AM