It's so irritating to have inconsiderate houseguests who eat you out of house and home. For example, here is this story from the "Chicago Tribune," February 16, 1922:

Although four neighbors, armed with shotguns, maintain nightly vigil at the home of Mrs. Catherine Milakowich, 318 South avenue, Waukegan, a hungry ghost, who has domiciled himself there, continues to be heard but not seen. Except on Mondays. He has Mondays off.

They've heard him at all hours of the night. And occasionally he has made his presence felt in other ways. For example, Michael Dezoma, a cigar manufacturer, tells how:

"Last Friday morning at 3 o'clock there was a funny noise at the door. The room was in darkness. I was striking a match to light a cigar. The door flew open, the match was blown out, and a hand grabbed me by the neck, choked me, and then hit me on the nose. I called to Jack Schlosser, the teamster, but the hand disappeared before we turned on the lights. I'm a brave man, but it made me nervous."

The ghost has taking ways. He took two sacks of flour and fifty pounds of sugar. The other night Mrs. Milakowich heard him in the cellar. He was making a noise like target practice. When the vigilante squad arrived there the remnant of the winter's supply of coal was tossed all about the place.

And Daniel, her eldest boy, dreamed the ghost walked into his bedroom one night and said: "Hello, kid." Daniel awoke the next morning to find his bed had been moved from one side of the room to the other.

"It all got my goat so," said Jerry Womka, who used to live above Mrs. Milakowich, "that I moved. We couldn't sleep or anything. The ghost used to carry on at all hours of the night."

First information of the ghost was made public when Mrs. Milakowich appealed for protection to Father Joseph Lauerman, pastor of St. Joseph's church, of which she is a member.

"He'll eat me out of house and home," said Mrs. Milakowich, who is a widow. "I don't know who he is, but he can't be my husband's ghost. My husband never had an appetite like that." 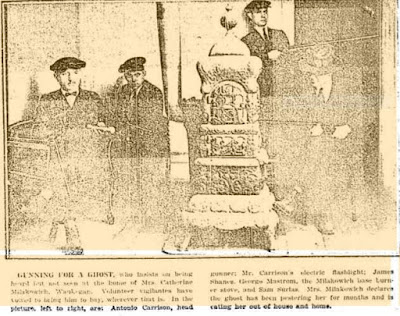 I haven't been able to find if Mrs. Milakowich was ever rid of this really quite unmannerly spirit.
Posted by Undine at 4:37 AM