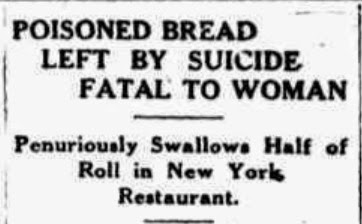 This sad story--which somehow seems so characteristic of the Depression era--is one of the most curious poisoning cases I know. This particular account comes from the "Kingston Daily Freeman," September 4, 1933:


New York.--Two persons were taken ill at almost the same moment in a restaurant at Broadway and One Hundred Fourth street. One was a man, the other a woman. They were strangers.

The man died within a few minutes in the restaurant wash room. The woman died an hour later in Knickerbocker hospital. Autopsies disclosed that both deaths had been caused by cyanide poisoning.

Detectives were of the opinion that the man had committed suicide and that the woman's penuriousness had betrayed her into becoming an unwitting companion in that act.

The man was Henry Jellinek, fifty years old, an automobile mechanic in business for himself. He had a wife and eighteen-year-old son, the latter a student at New York university. Jellinek, the police learned, had been in ill health for several weeks, and was worried over business conditions.

The woman, Lillian Rosenfeld, forty-three years old, lived by herself in a dank cellar apartment of two rooms. She was known there as Lillian Fields. She was a daughter of Simon S. Rosenfeld, a Boston and New York real estate man, who died twelve years ago.

So far as anyone in the house knew, Lillian Fields was almost penniless and had neither relatives nor friends. The janitor, on finding her sleeping in the hallway, obtained permission for her to sleep in the cellar apartment.

Lillian Fields, the janitor said, was always complaining of poverty; begging him for the scraps he had left over at meal time; rummaging in ash cans for anything she could salvage. The only furnishings of her apartment were a rickety bedstead with no mattress and a battered red plush sofa she had found in a vacant lot. And piled high around the walls were hundreds of cardboard boxes.

This is what detectives found when they broke through the window recently. But it was not all. At the time she was stricken in the restaurant they had found on her person a bank book. It showed deposits of $4000 in a savings bank. Hunting among the contents of the boxes they found five more bank books. These showed deposits aggregating $41,000 in other savings banks. Among them was a slip of paper which read:

Della Rosenfeld identified the dead woman as her sister. They had not seen each other for years, she said. Her father at his death, she explained, had left them each $15,000, and soon afterwards they had quarreled because Lillian accused her of being "too extravagant."

It is the theory of the police that Lillian Rosenfeld went to the restaurant--a Horn & Hardart automat--in the hope of finding enough scraps on the plates to save her the expense of buying breakfast, and this is what occurred:

Jellinek, bent upon taking poison, entered the restaurant, dropped a nickel in the slot, and obtained two poppy seed rolls. One of these he broke open, then poured a quantity of cyanide into it; the other he left untouched on the plate. He had eaten only half of the poisoned roll when he was taken ill and went to the wash room. Then Lillian Rosenfeld passed the table. Seeing the rolls on the table, she snatched up the whole one and slipped it into a paper bag. The other she devoured.


If this scenario explaining the dual deaths was correct, it certainly is an illustration of the strangeness of fate.

Or maybe it's just a lesson about what bad manners it is to filch food from other people's plates.

[Note:  If any of my New York readers have a taste for morbid architecture, the automat building is still standing.]
Posted by Undine at 4:37 AM