George Hanger, Who Did His Best to Keep the Georgian Era Weird 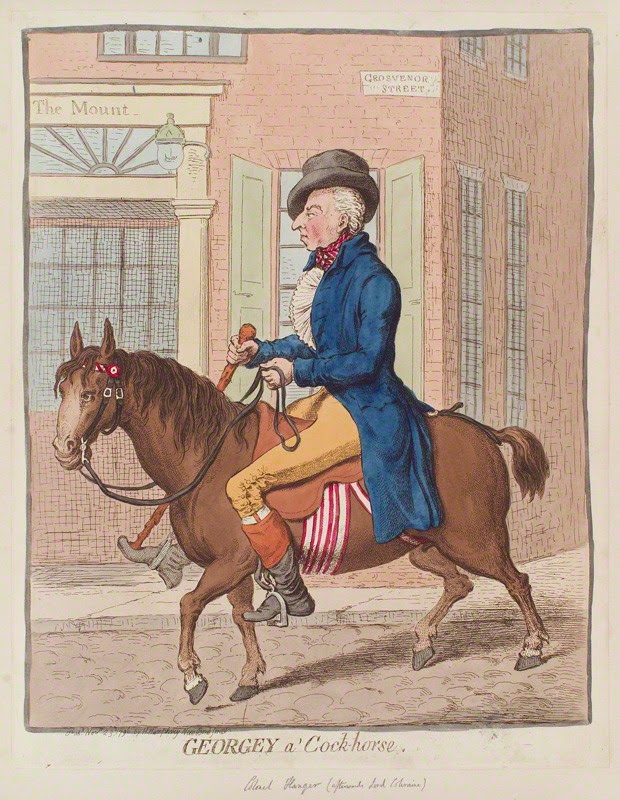 You have to love a guy who proved to be just too damn much for the likes of George IV. Meet George Hanger, 4th Baron Coleraine, one of my favorite minor eccentrics.

Hanger was born in 1751, as the third son of a wealthy Gloucestershire family. His father Gabriel was an MP who received the title of "Baron Coleraine" in 1762. As was usually the case with upper-class surplus sons, young George was pointed toward a career in the army. After graduating from Eton and the University of Gottingen, he did a brief stint in the Prussian Army before returning to England. In 1771, he bought an Ensigncy in the 1st Regiment of Footguards. It was at around this time that his more colorful qualities began to show themselves: George married a gypsy woman, who soon dumped him for an itinerant tinsmith. As Hanger himself wrote, "I was early introduced into life, and often kept both good and bad company; associated with men both good and bad, and with lewd women, and women not lewd, wicked and not wicked;--in short, with men and women of every description, and of every rank, from the highest to the lowest, from St. James's to St. Giles's; in palaces and night cellars; from the drawing-room to the dust cart...Human nature is in general frail, and mine I confess has been wonderfully so."

Hanger continued his army career, although philandering always remained his dominant interest. In 1776, he purchased a captaincy in the Hessian army, and in that capacity he fought in the American Revolutionary War, eventually transferring to become a major in the British Legion. After a less-than-distinguished performance commanding a legion (and leading it into defeat) at the Battle of Charlotte in 1780 (an experience he airily dismissed as a "trifling insignificant skirmish") Hanger came down with yellow fever, and was sent to the Bahamas for his convalescence. (He claimed to have cured himself with a diet of port wine laced with opium.)

After his return to England, Hanger became great friends with the Prince Regent, who later took the throne as George IV. The prince keenly admired Hanger's quirky sense of humor and appetite for dissipation, and as a reward for this free entertainment, created him Equerry in 1791. Despite this royal favor, Hanger's passion for fancy clothes and general riotous living landed him in debtor's prison in 1798-99. He used this mandatory leisure time to write his memoirs, which were eventually published in 1801.

This utterly delightful work featured a sketch depicting the author suspended on a gibbet, and included such edifying chapters as "Advice to the lovely Cyprians, and Fair Sex in general, how to conduct themselves in future, and to practise with greater satisfaction the three cardinal virtues, namely, Drinking, Gambling, and Intriguing." Among his "advice" was the recommendation that women settle their differences by dueling each other. He urged that ladies, when eloping, should leave through a window, rather than a door. "It will impress your lover with a respect for your heroism, and ever establish you, in his opinion, as a woman of true spirit, courage, and spunk." Hanger also approved of the current fashion for women to wear loose gowns, which he saw as "admirably constructed either for a young lady to conceal a big belly, or a shop-lifter to hide a bale of goods." On a more political note, he proposed a tax on all Scots who spent more than six months out of the year in England.


After Hanger's release from prison (his friends clubbed together to pay his debts,) he decided there was nothing for it but to try to earn an honest living. He horrified his aristocratic peers by setting up business as a coal merchant. He did quite well in the line, too, and enjoyed embarrassing his more snobbish peers by proudly flaunting his career. He supplemented his income by working as a jockey and organizing such stunts as a cross-country race between a flock of turkeys and a flock of geese. (Rather than race, the turkeys opted to roost in some trees along the side of the road, ensuring that the geese won in a walkover.) His friend John Thomas Smith recorded for posterity Hanger's one-day stint as an apple-seller:


I also once heard Lord Coleraine, as I was passing the wall at the end of Portland-road, when an old apple-woman, with whom his Lordship held frequent conversations, was packing up her fruit, ask her the following question:

"What are you about, mother?"

"Why, my Lord, I am going home to my tea; if your Lordship wants any information, I shall come again presently."

"Oh! don't baulk trade. Leave your things on the table as they are; I will mind shop till you come back."

So saying, he seated himself in the old woman's wooden chair, in which he had often sat before whilst chatting with her. Being determined to witness the result, after strolling about till the return of the old lady, I heard his Lordship declare the amount of his receipts by saying, "Well, mother, I have taken three-pence half-penny for you: did your daughter Nancy drink tea with you?" 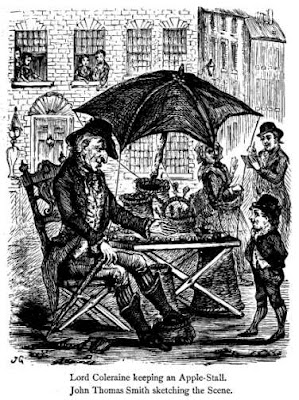 Hanger also became famous for what a later biographer described as "the train of strumpets, dogs and monkeys" he kept in his lodgings. A contemporary described with disgust Hanger's fondness for "introducing into the best apartments of the most respectable families, his cats, his dogs, and his monkeys, while revelling himself in every species of sensuality." In 1787, the newspapers printed his "Ode to Bacchus," written to consecrate a London saloon. ("Illustrious son of Jove and Semele/To thee we dedicate this pile/Built for the Heir-apparent of your isle/Who must one day/When Death shall call his powers into play/Look on his subjects as a monstrous family...")

Hanger's peculiar personality also made him a favorite for contemporary satirists. Caricaturist James Gillray produced no less than twenty prints mocking him as "Georgey the cock-horse," and "Georgey in the coal-hole." Unfortunately, a contemporary recorded that Hanger's "eccentric manners" became "somewhat too free and coarse" for the Prince Regent's liking, and the two parted ways.

Following the deaths of his father and older brothers, he succeeded to the family title in 1814, but he flatly refused to take his seat in the Irish House of Lords. (He did, however, happily accept the handsome family fortune which came with his accession.) It was said that he "was always somewhat peevish" when others persisted in addressing him by his rightful title, correcting them by saying "Plain George Hanger, if you please." Around this time (the date is unknown,) he married his housekeeper, Mary Anne Greenwood. The couple had one son, John.

George Hanger died of a "convulsive fit" on March 31, 1824. His gravestone describes him as "a practical Christian, as far as his frail nature did allow him so to be."

Can't say fairer than that.

Probably due to the questionable legality of his second marriage, his son did not succeed to his title, thus the baronetcy became extinct. If John was anything like his old man, he probably didn't want it, anyway.

Hanger's obituary in the "Gentleman's Magazine" noted that although he "was free in his manners, he never was inclined to give intentional offence, and the peculiarity of those manners precluded all idea of resentment, and laughter rather than anger was the result of his most extravagant sallies. He was capable of serious exertions of friendship, not by pecuniary sacrifices, for of such his situation hardly ever admitted, but by persevering zeal when he was likely to effect a beneficial purpose...Though disposed to participate in all the dissipations of higher life, he yet contrived to devote much of his time to reading...He was so marked a character that he might be considered as one of the prominent features of his time, and he was courted as well for the peculiarity, as for the harmless tendency of his humour."

Not a bad way to be remembered, really.
Posted by Undine at 5:00 AM