The Case of the Living Ghost 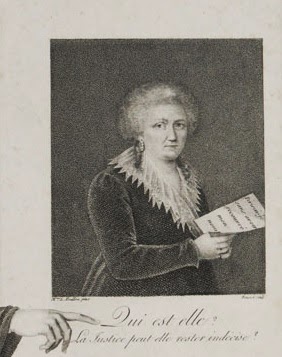 In history, there are many cases of imposters being unmasked, and their true identities revealed. But what if, on at least one occasion, the opposite took place? What if someone who was indeed who they said they were found themselves permanently labeled as a fraud?

This nightmarish scenario--which would truly deserve being described by that overused word, "Kafkaesque"--just might have occurred in 18th century France.

The troubled history of Adelaide-Marie de Champignelles began in 1764, when the 23-year-old minor aristocrat married a rich nobleman, the Marquis de Douhault. On paper, it was an excellent match, pairing two people of suitably attractive rank and income.

Unfortunately, from every other standard, the marriage was a disaster. Only a year after the wedding, the bridegroom went violently insane. He became so dangerous that his family was forced to put the Marquis into an asylum, where he remained until his death in 1787. The young Madame de Douhault was left in the anomalous position where she was not truly a wife, but not a widow, either. The Marquise, however, bore her problems bravely, earning a reputation for benevolence and exemplary moral character.

The Marquise's real problems came from her brother Armand-Louis, the comte de Champignelles--the villain of this piece no matter what view you take of the mystery. Armand was a greedy, conscience-free wastrel, and when he became head of his family after his father's death in 1784, he set out to enrich himself at the expense of his other relatives. His mother had been left a life interest in all her husband's property, on the condition that she pay her son 4,000 francs a year, and her daughter 40,000. This was not to the comte's liking. Instead, he bullied his mother into accepting an allowance from him of 11,000 francs a year. In return, he took over all the family property. Rather predictably, the promised allowance was rarely paid to Madame de Champignelles, with the result that the elderly woman found herself nearly penniless. She implored her daughter to join her in a lawsuit to regain their rightful claims to the estate. Armand was faced with the threat of either having to either restore his mother's financial rights, or share the estate with his sister. In addition, after her husband died, Madame de Douhault drew up an inventory of her rightful inheritance. For as long as she lived, a good chunk of the Douhault estate was legally hers. It would only revert to other heirs until after her death. There is no question that Adelaide-Marie de Douhault was a financial burden and all-around serious nuisance, as far as her brother and her in-laws were concerned.

Such was the situation in December 1788, when Madame de Douhault left her home in Chazelet to visit her mother in Paris, so they could decide on their best options for dealing with this family crisis. Along the way, she stopped at the home of a M. du Lude, a relative of her late husband. It should be noted that he was one of the people who would receive a share of her husband's property after she died. When she arrived, du Lude made the odd recommendation that she instead stay at the home of a neighbor, M. de la Ronciere. Madame de Douhault was naturally quite surprised by this eccentric rudeness, but she did as she was told. The Marquise settled into a bedroom at the de la Ronciere estate. She almost immediately fell gravely ill, and on January 18th, 1788, she died. She was buried three days later.

Three years later, on October 17th, 1791, The Weird began to kick in,when a veiled woman arrived at the gates of the de Champignelles family estate. She announced to the guard that she was his master's sister, the Marquise de Douhault.

The guard explained that long-dead women were not welcome guests at the mansion, and turned her away.

The next morning, the stranger attended mass at the local church. Everyone was astounded at her uncanny resemblance to the late Madame de Douhault. It was not merely that she looked like the Marquise--her walk, her voice, her mannerisms all marked her as the dead woman's identical twin. When she was approached by incredulous spectators--all of whom had known the dead woman well--she told them calmly that she was not a doppelganger, but the very woman who had supposedly been buried in that same church. She greeted her old friends, identifying them all by name and reminding them of circumstances from the past that only the Marquise could have known. By the time everyone had filed out of the church, there was not a person there who doubted that Adelaide-Marie de Douhault had somehow come back from the grave. During the next few days, she was visited by many other local residents, all of whom were equally convinced of her identity.

On October 23, a formal inquiry was held into this startling reappearance. Nearly a hundred people came forward to testify that this mysterious stranger was, indeed, Madame de Douhault. She thereupon sent the comte de Champignelles a formal summons instructing him that he was illegally possessing her properties. As he ignored this message, she filed suit to be reinstated to all her titles and goods. She also requested 500,000 francs in damages. As far as the comte was concerned, his sister had certainly been better off dead.

The story the claimant gave for her startling resurrection was this: On January 15, 1788, she prepared to leave de la Ronciere's home to continue her journey to Paris. Before she departed, Madame de la Ronciere offered her some snuff. After taking it, she immediately developed a severe headache, and then lost consciousness. When she awakened, she found herself in the Salpetriere--a notorious institution for lunatics and criminals. Her confusion increased when she was told that she was not Adelaide-Marie de Douhault, but a petty swindler named Anne Buirette who had been imprisoned on January 3, 1786.

After a year and a half of this imprisonment, she finally succeeded in sending a message to her friend, Marie Antoinette's famed "favorite," Madame de Polignac, telling her what had happened, and pleading for help. Thanks to this powerful ally, de Douhault obtained her freedom, only to learn, to her horror, that she was legally dead.

The comte de Champignelles, predictably enough, denounced her as a brazen impostor, but when she visited Versailles, de Polignac, as well as the rest of the court, all recognized her. Unfortunately, revolution was brewing in France, an upheaval which soon left the King and his court powerless to help her. She filed a civil action demanding legal recognition of the fact that she was, indeed, the far-from-dead Adelaide-Marie de Douhault.

In February 1792, Armand de Champignelles had an interrogatory put to the claimant, consisting of 114 questions aimed at testing her knowledge of the most minute details of Adelaide-Marie de Douhault's life. She answered them all perfectly except for one. When she was asked when she was placed into the Salpetriere, she answered "January 3, 1786"--the same day that "Anne Buirette" was allegedly imprisoned.

Afterwards, she claimed she had become confused by the questioning, and meant to give the year as "1789," but this one answer proved fatal to her case. Unquestionably authentic records showed that on January 3, 1786, Adelaide-Marie de Douhault was at her home in Chazelet. The judges in the case ignored the hundreds of people who had no doubt whatsoever that the claimant was the "dead" Marquise. They ignored the fact that prison records showed that "Anne Buirette" was 28 when she was imprisoned in the Salpetriere. (Madame de Douhault was 45 at the time.) They ignored her detailed, encyclopedic knowledge of the intimate history of Adelaide-Marie. They ignored the fact that her body bore the same distinctive scars as the Marquise. The judges, already reluctant to discredit official death and burial records, seized upon her one slip-up over that one date to declare her an impostor and wash their hands of the whole messy business.

She continued to pursue her claims in the courts for some years, but the original negative verdict continued to be upheld. Many people came forward to testify that this woman was indeed the Marquise. Francoise Périsse, the Marquise's chambermaid who had accompanied her on that fatal trip to Orleans, deposed that although she believed her mistress had died, she had--heaven knew how--surely returned to the world of the living. Other witnesses--largely relatives who had strong financial incentives for Madame de Douhault to remain deceased--stated that the claimant was a fraud. And, of course, there were the certificates from the doctors who had attended the Marquise during her illness in Orleans, and declared her dead.

However, although the law decreed who the claimant was not, they could not say who she was. Anne Buirette's former husband testified that whoever the claimant might be, she was not his wife. It officially remained a mystery what her real name was, how old she was, where she came from, or how she spent her life before she emerged from the Salpetriere. She was in a much worse position than the famed "Man Without a Country"--she was the "Woman Without an Identity." As one anonymous historian noted, "It is the only trial in which an impostor has been condemned for assuming a false name without the discovery of his real name and origin."

If this woman was indeed Adelaide-Marie de Douhault, she may not have been dead, but she was, for all intents and purposes, a ghost. She lingered in this strange legal non-existence until 1832. (A few sources say 1817.) No name was allowed to mark the gravestone of someone who was either the most wronged of women or the strangest of impostors.

[Note: This puzzling case was the inspiration for Wilkie Collins' famous novel "The Woman in White."]
Posted by Undine at 4:54 AM