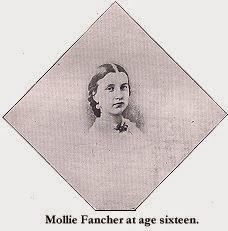 Mary Jane “Mollie” Fancher appeared destined to be one of the most pleasantly average girls in Brooklyn, New York. Her early life had had some troubles, but no more than were successfully faced by many people in that or any other period. Born on August 16, 1848, her mother died when she was seven, and her father subsequently remarried and virtually disappeared from her life. She and her two surviving siblings were thereafter raised by an unmarried aunt, Susan Crosby. Fancher grew up bright and well-liked, and appeared quite normal until 1864, when she developed some vague, not-unusual complaints—“nervous indigestion,” lack of appetite, and general weakness. Physicians prescribed a regime of horseback riding as the best way of “bringing her out of herself.” It indeed set her on the road to doing just that, but in ways no one imagined. This seemingly innocuous doctor’s order was her first step into becoming what would later be called "The Brooklyn Enigma." Even if the more astounding stories about her are taken with some skepticism, she still remained striking proof that we human beings are far more complex and mysterious creatures than we even realize.

Fancher’s long, strange journey began on May 19, 1864, when she was thrown from her horse. She suffered a few broken bones and head injuries, but she gradually recovered. She even accepted a proposal of marriage. However, her convalescence was scarcely over before she was even more badly hurt in a horrific accident where her skirt became caught on a streetcar and it inadvertently wound up dragging her over the pavement for nearly a block. She suffered head and spinal injuries, and it seemed at first that this second incident was too much for the girl. On February 3, 1866, Fancher, who had been bedridden since her accident, slipped into the first of what would prove to be a lifetime of recurring trance states. From that time until the end of her life, she was bedridden, often blind and utterly paralyzed. She scarcely, if ever, ate or drank. Her baffled doctors could do nothing for her except try to make her tormented existence as bearable as possible.

In June of 1866, her doctor, Robert Spier, arrived to do a routine examination. Before leaving, he said smilingly, “I always remain here longer than I intend. I was to be home today at one o’clock to my dinner. We are having chicken pot pie, and you know it is never good when cold.”

The next day, Fancher fell into a lengthy trance state. Her right hand was frozen in an awkward position behind her head. Her entire body was largely paralyzed and in chronic, agonizing pain. 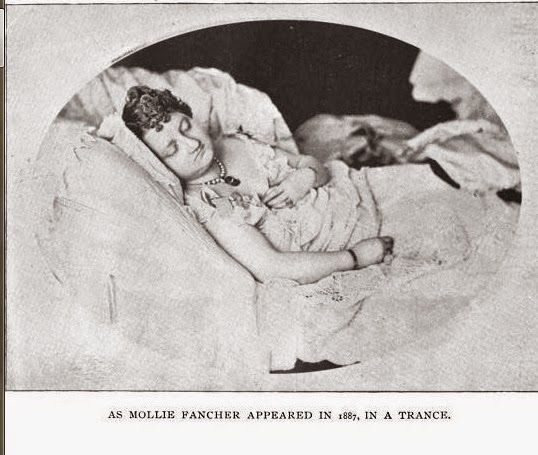 Here is where Fancher’s story goes from tragic to incredible. This paralyzed, bedridden, pain-wracked, seemingly utterly broken woman became a whirlwind of activity. She wrote thousands of letters, kept a diary, created numerous beautiful yarn works and wax flowers, (talents she did not have before her illness,) and from her little bedroom--a room she would never leave again--carried on a busy social life.

This went on for nine years, until she went into another mysterious coma. When she awoke, the first face she saw was that of Dr. Spier’s brother. She asked him if his sibling made it home in time to get his chicken pie. Then, she realized that everyone around her suddenly looked much older…

Her mind had reverted to the “old Mollie.” She had no memory of the past nine years. When shown her letters and yarn work, she thought, “They were the work of one who was dead.”

Fancher began exhibiting varied psychic abilities. For unknown reasons, she quickly went blind, only to discover that she could “see” anyway. She could not explain it other than to say that it was like she could somehow “see” through her forehead. (This likely had something to do with the pineal gland located between the eyes—what mystics call “the third eye.”) She also displayed clairvoyant powers, predicting events in the future. She began to practice “astral projection,” where her mind could travel at will and observe events hundreds of miles away. On at least one occasion, this “wild talent,” as Charles Fort would call it, plunged her into horror. One day, she suddenly screamed, “My God, he is dead!” She was helplessly watching her brother dying in a train accident.

Fancher's other peculiar abilities were carefully recorded. It was said that in complete darkness, she could correctly distinguish colors. She could find objects people had mislaid. She knew when thunderstorms were approaching, many hours before they arrived. She read letters and books merely by running her hands over them. When her front bell rang, she knew who was there before anyone even answered the door.

On one occasion, she suddenly told Miss Crosby, "Aunt, Uncle Ike is at the door, and he is very ill." She was right. Waiting outside the door was Ike Crosby, the brother of Mollie's late mother. Ike had left New York when Mollie was still a small child. This visit of his was the first time since then that anyone in the family had seen or heard of him.

All this turned Fancher into America's most famous invalid. She was visited by a steady stream of doctors, scientists, poets, authors, academics, and clergymen, all anxious to solve the riddle of someone who was so helpless, yet so strangely gifted.

A noted astronomer named Henry Parkhurst had all the doubts a rational man of science would feel about the stories of Fancher’s odd powers. He did a number of experiments designed to show whether the young woman was a cynical hoaxer, a hysterical invalid, or…well, something else altogether. At the end of his tests, he still could not understand her, but he was convinced her paranormal abilities were genuine. (Fancher herself was unable to explain her gifts other than statements such as “I have broken the backbone of science and all the ‘ologies!”)

One day in 1887, Fancher fell from her bed, causing yet another head injury. Several days later, a friend was sitting with her when she fell into one of her sudden, inexplicable trances. When she awoke a few minutes later, she gave the man a puzzled look. “Who are you?” she asked…in a voice that was not Mollie Fancher’s.

Yes, evidently feeling life wasn’t quite weird enough already, Fancher had developed split personalities. Five of them. Everyone around her was introduced to “Idol,” an aggressive type, “Rosebud,” a sweet six-year-old, “Pearl,” an ethereal, elegant lady who wrote poetry, “Ruby,” a wisecracking, rambunctious tomboy, and “Sunbeam,” who seems to have been an extension of Mollie’s original self.

By the 1890s, Fancher's physical condition improved somewhat. She regained some of her sight, she was able to move her arms and upper body, and she ate and drank almost normally. Curiously, her relative return to health saw a corresponding decrease in her psychic abilities.

In a newspaper interview that appeared in the "New York World," on November 12, 1915, she gave her own rationale for her long and unusually unfortunate existence, suggesting that "there must be some hidden purpose in keeping me alive and that maybe it is just to show thousands of suffering men and women that the human soul is greater than the body and can triumph over any illness or pain the body may have to endure."  Despite her near-lifetime as a recluse, she still took a great deal of interest in the outside world.  She displayed a rather wistful interest in contemporary ladies' fashions--although she thought girls nowadays didn't wear enough--and expressed her disgust for automobiles and the Kaiser.  She was also a supporter of women's suffrage.  ("I pay taxes on this house and I ought to vote.") 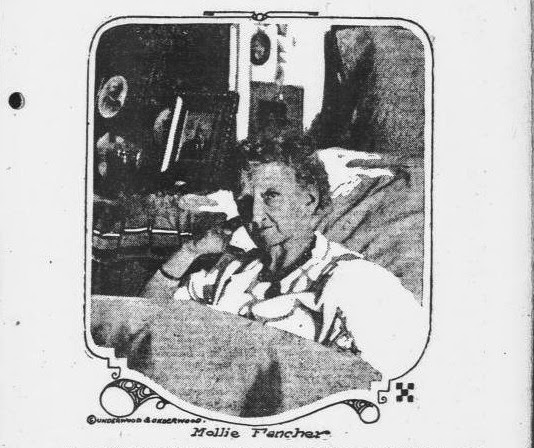 Fancher continued in her strange, kaleidoscopic little world until on February 3, 1916, she reached the fiftieth anniversary of her first trance state, which she wryly called her “Golden Jubilee.” The “Brooklyn Enigma” died eight days later.

It is ironic that her tombstone reads, “Mollie Fancher knew the secret of life.” While she accepted her eerie, tortured existence, she probably remained an enigma even to herself.