This first Link Dump of December is hosted by some of our Christmas Cats! 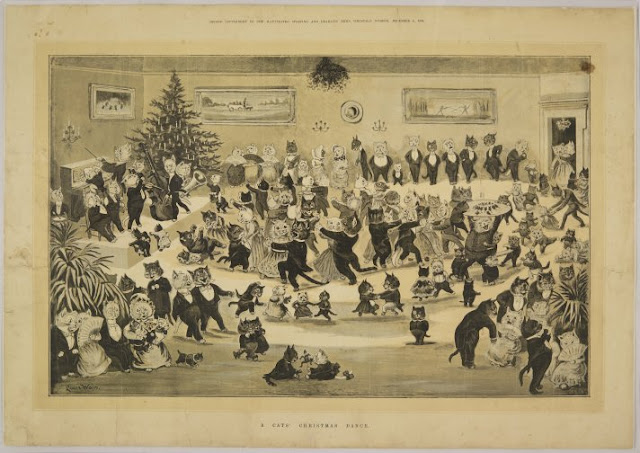 What you would eat at an ancient Roman tailgate party.

Yet another unhappy wife who opted to say it with arsenic.

A beautiful Scottish castle is on sale for $2 million.  When you consider that a whale skeleton is included, that makes it even more of a bargain.

A tale of a Victorian crossing sweeper.

The mystery of the disappearing island.

A brief history of waffles.  Meh, I prefer pancakes, myself.

Yes, they're still trying to figure out what happened to Amelia Earhart.

Yes, they're still trying to figure out what killed Bruce Lee.

Christmas during the siege of Paris.

Spending a penny in the old palace of Westminster.

The fairy witch of Carrick-on-Suir.

Facial reconstructions of people from the past.  There's no way to know how accurate they are, of course, but they're fun.

"Waiting mortuaries" for people who want to make sure they are really dead when they're buried.

A Christmas at Belvoir Castle.

How the word "lap" got several different meanings.

The scandalous murder of a Gilded Age entrepreneur.

The man with the world's longest nose.

The Veiled Woman of Penn Park.

There is a sporting event known as the Commode Bowl.  Just thought you should know.

Howe and Hummel, two lawyers who were a criminal's best friend.

There may be something really freaking big living under Antarctica.  Not alarming in the slightest.

That's it for this week!  See you on Monday, when we'll look at a strange twist on the old "ghost returns without anyone realizing it's a ghost" stories.  In the meantime, here's everyone's favorite Civil War tune that is not from the Civil War.