Things are a bit hectic around here.  The Strange Company HQ staffers are busy dealing with Thanksgiving leftovers. 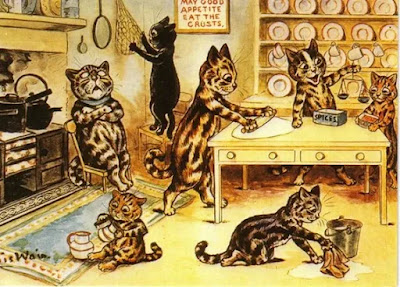 Pro tip: If you want it to look like suicide, don't shoot your victim six times.

How you can communicate with your cats.  Not that they'll necessarily listen, of course.

The roundels of Spitalfields.

News from the world of underwater archaeology.

Legends of "lost" Welsh islands might actually be true.

The grave of a man who was buried standing up.

Getting to the English Parliament in medieval times wasn't easy.

The history of various Thanksgiving traditions.

A new theory of why ancient Egyptians practiced mummification.

A notorious disappearance in the Grand Canyon.

A ghost that wasn't a fan of mourning clothes.

It seems that humans were cooking food a lot earlier than anyone thought.

Education for girls in the Georgian era.

The fakelore of food.

The heyday of "Princess Alice" Roosevelt.

A village in Romania boasts a matrimonial prison.

How cats may come to help solve crimes.

The herding dogs of the Regency era.

The more obscure meanings of the word "plight."

The early years of football in the Gulf.

Anne Greene, one of the luckier people to be hanged.

The GI brides of WWII.

That's it for this week!  See you on Monday, when we'll examine an antique purchase that went very, very weird.  Speaking of weird, here's what happens when a magician builds a guitar.