The Devil's Rocking Chair; Or, The Dangers of Buying Discounted Antiques 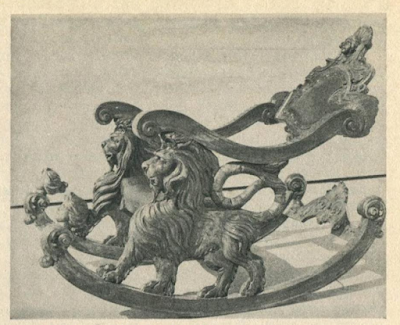 Fifteen-year-old Jody Randall of Long Beach, California, was in most ways a typical suburban teenager.  The one thing that set her apart was a passion for antiques which was unusual for someone of her youth.  As a result of spending all her available free time (and her parents’ money) on her hobby, she eventually amassed some impressive pieces, including a doll collection noteworthy enough to earn a writeup in “Teen” magazine.

In the summer of 1970, she sold a vintage French doll to an antique dealer named Marge Lord.  While in Lord’s shop, Randall saw a heavy, ornate rocking chair dating from about 1550, of a style known as “Black Forest sleigh.”  The girl was fascinated.  She knew instantly that she must buy it, even though when she sat in the chair, she had the disconcerting feeling that invisible arms were tightly holding her waist.

Lord told Randall that she didn’t want to sell the chair, but an offer of $1,250 might change her mind.  This was way over Jody’s budget, but the teen was in love.  All she could think of was trying to find some way to get enough money to make the chair her own.

In August, Lord phoned Jody to say that she was now willing to give her the chair for $800.  Randall could even pay her in installments!  Jody was so thrilled to get the antique buy of her dreams, she never stopped to wonder why Lord’s feelings about the chair had changed so abruptly.

By early September, the chair was gracing the Randall living room.  It was not long before the family noticed that there was something…odd about their new acquisition.  No matter how well-lit the room was, the chair appeared to be in darkness, as though it was surrounded by a murky fog.  One afternoon, as Jody sat reading on the floor next to the chair, she suddenly felt a weird blackness surrounding her, leaving her immobilized.  She could not even speak.  After a period of time--she couldn’t even say how long--the dark haze disappeared, leaving her back to normal.  Telling herself that the creepy experience was all in her head, she decided not to mention it to anyone.

About a week later, the black veil again enveloped her--only this time, she saw “hellish-looking yellow eyes” appear over her head.  The terrified girl felt some evil presence was trying to possess her.  The eyes soon disappeared, but the black fog clung to her for some time.  After it finally vanished, Jody was left completely exhausted.

Jody began to feel frightened whenever she was in her house.  She had the sense that some sinister presence was stalking her.  The family’s Yorkshire terrier, Girl Dog, appeared to share the girl’s fear.  Girl Dog avoided the living room, and whenever she was alone in the house, the Yorkie would go next door to the home of Jody’s grandparents, begging to be let in.

One day in October, Jody and her mother were sitting in the living room, when the girl suddenly saw two bats fly through the room.  Her mother had seen nothing.  However, the next day, when Mrs. Randall and some visitors were in the living room, they all saw a weird light appear.  The whole family began to hear strange tapping on the walls, and the sound of invisible hands banging on the front door.  One evening, Mrs. Randall saw the heavy wooden chair vigorously rocking on its own.

Soon after this, Jody was in the kitchen when she heard loud scuffling noises coming from the living room, as if people were fighting there.  When she entered the room, she saw the chair rocking.  She then heard mocking laughter and a voice saying, “Soon she will be in my power.”  After this, the girl frequently woke up in the night to the sound of some invisible being breathing hoarsely in her bedroom.

It began to dawn on Jody why Marge Lord became so willing to sell the chair.

Despite all this, Jody’s father, Jim Randall, remained skeptical.  He did not believe in ghosts, or evil spirits, and remained convinced that the household was suffering from nothing worse than an outbreak of overactive imaginations.  However, realizing that his daughter was genuinely terrified, he offered to buy the chair from her.  He explained that if he became its official owner, she would then be left in peace.  Jim gave Jody $10, and she gave him a formal receipt.

Jim moved the chair to their garage, jokingly telling the antique that if it didn’t behave, he would turn it into kindling.  A few days later, as Jim was gluing formica to a wall, the can of glue mysteriously exploded, covering his legs with burning adhesive.  His burns were so severe he needed a series of skin grafts.

After Jim was hospitalized, his panicked family--now thoroughly convinced something satanic was going on--went to a family friend, Nadine, who was a clairvoyant.  After meditating near the chair, Nadine stated that she saw a monk standing near the rocker, and another man sitting in it.  She sensed that the sitting man was a ruler somewhere in Northern Europe who had sent very many people to their deaths.  She said it was the most disturbing vision she ever had.

Being exiled to the garage did nothing to stop the chair’s malevolent properties.  One day, when Mrs. Randall went to the garage to feed the cat, she saw the chair do its ominous rocking.  A few days later, Jody’s grandmother entered the garage.  She saw nothing, but felt such an air of unease that she left as soon as possible.  The minute she reentered the house, a large ladder that was leaning against the house inexplicably crashed to the ground.

Shortly after this episode, a friend of Judy’s named Bob Anderson playfully sat in the chair and announced that the rocker didn’t scare him.  That night, he was in an auto accident which nearly killed him.

The Randalls--rather late in the day, one would think--decided it was time to get rid of the chair.  A local antique dealer put the chair on sale, without attracting any buyers.  Then, the Randalls had the ingenious idea of writing to Anton LaVey, the notorious founder of San Francisco’s Church of Satan.  The family explained to him that they appeared to have a demon-possessed rocking chair on their hands, and--considering his line of work--they asked if he would be interested in acquiring it.

LaVey was delighted at the idea, and offered them $500.  He cheerfully explained that it was entirely possible to live peacefully with such entities, if you only understood them.

Journalist Marilyn Estes-Smith, who wrote an article about the chair in the July 1973 issue of “Fate Magazine," asked Marge Lord about the rocker’s history.  Lord explained that she had bought the chair from a Mrs. Conger.  She had planned to keep it for her own use, but after coming into the room one day to find the chair rocking on its own, she thought it might be a good idea to let young Miss Randall have the thing.  When Mrs. Conger was contacted about the chair, she became very upset and refused to even talk about it.

The backstory of this antique chair will probably forever remain a mystery.  At least Mr. LaVey had a happy ending from the story.  It’s not every day that a satanist can pick up a cursed rocking chair on the cheap.