The staffers at Strange Company HQ are getting ready for Easter! 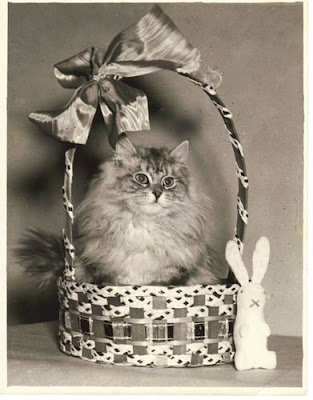 Was there a real Miss Havisham?

The mysterious sinking of a Pakistani submarine.

The Harvard lecturer who was executed for murder.

In which we learn that Joseph Conrad lost £40 thanks to the sinking of the Titanic.

And here's an author who foresaw said sinking.

The Hindenburg disaster in contemporary newspapers.

A handy reminder that I really, really hate eggnog.

The origins of the Easter Bunny.

A remarkable escape from Auschwitz.

The strange case of the nurse impostor.

A guide to Regency-era slang.

The regulars and fainters of Philadelphia funerals.

The demise of the literary feud.

An ancient bowl from Tibet may depict Alexander the Great.

The life of an unusual Georgian-era painter.

100-year-old wax recordings are about to be heard.

The bride-to-be who survived the Titanic.

The oases of Antarctica.  You still wouldn't want to spend a vacation in them, though.

The short and tragic career of HMCS Margaree.

A reassessment of Durer's Four Horsemen.

A really weird cloud over Alaska.

This may be the oldest known name in the world.

A look at a new biography of Tolstoy.

The amazing Italian villa that nobody wants to buy.

A battered wife fails to get justice.

A military blockade from the Napoleonic era.

The legend of Jenny, Titanic cat.

That's all for this week!  See you on Monday, when we'll look at a man who did some crystal-gazing...and eventually wished he hadn't.  In the meantime, here's one of those songs from Back In The Day.