The staff at Strange Company HQ will be happy to serve you tea. 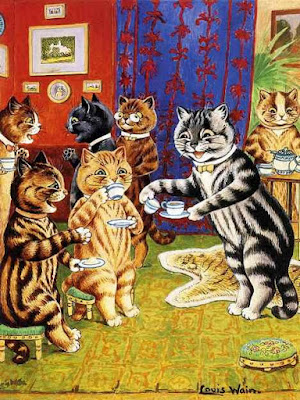 The Dead Man of Clerkenwell.

An amnesiac recovered his identity.  And probably came to regret that.

The theft of the Irish Crown Jewels.

A bunch of hippies are convinced there's a civilization beneath the North Pole.

The mystery of the Singapore Stone.

The O'Learys would really like you to forget about the Chicago Fire.

How an enterprising lad benefited from the death of Princess Charlotte.

A type of owl that hasn't been seen for 150 years just popped up.

A remarkable hoard of Anglo-Saxon coins has been discovered.

The man with the 10-second memory.

A look at the old British Foreign Office.

One of the most influential books about witchcraft.

The hazards of 19th century matchmaking.

A new look at the tomb of the Black Prince.

Archaeologists are finding all sorts of things in an ancient amphitheater.

The good news: you can travel through time. The bad news? You can't come back.  (Although, considering what 2021 has been like, perhaps that's the good news, as well.)

A summer camp for paleontologists.

Where "dead as a doornail" came from.

The psychology of haunted houses.

Archival documents dealing with the murder of Lord Darnley.

The tragedy of the first dog in space.

A cursed grave in Scotland.

A selection of haunted bookstores.

The famed haunting at Hinton Ampner.

That's all for this week!  See you on Monday, when we'll visit the wild world of cryptozoology.  In the meantime, here's a lovely bit of Bach.