Newspaper Clippings of the Thanksgiving Day

Those of you familiar with this blog know that I consider  Fourth of July to be the most lethal of all holidays (and God knows I have posted enough evidence to prove it.)  However, in recent years I have come to appreciate the body-count possibilities of that other all-American celebration, Thanksgiving.  In Novembers past, I have chronicled weaponized turkeys, fatal quarrels over the dinner table, and shootouts at turkey raffles.  This year, I will share with you yet another beloved Thanksgiving tradition:  exploding birds.

Thanksgiving Day, a 30-pound turkey caught fire in the oven of a local resident. In the process of extinguishing the flaming bird, smoke filled the house. The owner, to make things a little more pleasant inside, opened the house doors, and took a broom to help circulate the air.

In the process of shooing smoke from one room, the broom struck a light fixture, tinkling it to the floor.

It was the third turkey the family attempted to cook without success. But the family's courageous; they plan to try again someday to cook a turkey, to prove to themselves it can be done.

I have one word for this unnamed family: takeout, gang.  Takeout.

SOUTH HAVEN-Volunteer firemen were called to the home of Isaac Merritt, 420 Edgell street, about 2:10 p.m. Thursday, after the grease from a turkey caught fire in the kitchen stove. Firemen said they used a smoke ejector to clear the house of smoke. Damage was limited to one Thanksgiving dinner.

BOWIE, Md. (UPI)-James and Iva Savage spent Thanksgiving with their seven children in a Red Cross shelter after a baking turkey burst into flames and started a fire that destroyed their home and all their belongings.

Officials of the Prince George's County fire department said Mrs. Savage had started her turkey Wednesday night and about 1:30 yesterday morning, while her husband and children were asleep, went into the kitchen to baste the bird. But when she poured cooking oil on the turkey it burst into flames, which quickly spread through their small house. She quickly awakened her husband and children and got them to safety but everything they owned was destroyed. Damage was estimated at $20,000.

Some turkeys are incendiary devices; others are bombs.  The Fort Myers “News Press,” November 24, 1952:

Anything can happen around a turkey ranch, even a call from an irate customer who wails that her dressed turkey has exploded. It happened last winter to Mr. and Mrs. John H. Tice, who turn out 600 to 1,000 turkeys a year for the holiday markets.

The Tices specialize in what they call "oven-ready" birds dressed, refrigerated and cellophane-wrapped at the efficient little packing establishment they have set up on the Peters farm near Olga, where they have raised 1,000 birds this year for the Thanksgiving and Christmas markets.

On a Sunday morning which the Tices will never forget their phone rang and a woman's voice reported frantically: "That turkey I bought from you just blew up in the oven!" It turned out that the customer, taking the "oven-ready" label a little too literally, had put the bird into the oven cellophane and all. The cellophane bag, under heat pressure, swelled, then exploded.

ROME (U.P.) Meo Pasquetti, a poultry dealer, got the idea of blowing up his turkeys with a pump so as to sell them the more easily. Everything went well until a turkey exploded and a piece of bone injured his assistant's eyes.

This Thanksgiving horror story--more detailed and baroque than most--appeared in the Stockton “Evening Mail,” November 30, 1911:

The noise of a frightful explosion at the home of Joshua Jones, No. 1482 South Commerce street, shortly before noon today attracted several of his neighbors to the house.

On entering they found everything in confusion, with a strong smell of gas. Investigation disclosed the fact that the Thanksgiving turkey had exploded just as Josh was about to carve it. Josh was considerably surprised, but not so much so that he wasn't able to grab a leg as it sped by his head. It is a very bleak day when Jones lets a turkey get away from him in its entirety.

Young Johnny Jones also showed some speed and was able to annex a large hunk of the white meat before it hit the floor. It had already made a dent in the ceiling.

Mrs. Jones had been fasting for that turkey all day, and when she recovered from the first shock she stabbed the carcass with a fork and a come-here-to-you motion. She also scraped a large chunk of stuffing from under her chin about a foot under.

Sally Jones was never known to lose out on a turkey yet, and when she saw the bird start towards the roof she spread her apron and caught a meaty shower in it, to say nothing of a daub of dressing that landed in her eye.

Willie Jones had his mouth open at the moment of the explosion, and the whereabouts of the piece known as the "popes nose” is still a matter of conjecture.

Jones says he can only account for the upheaval in turkey on the hypothesis that the cook blew out the gas and some of it accumulated in the bird, a spark from the steel igniting it when he was sharpening up for the post-mortem. 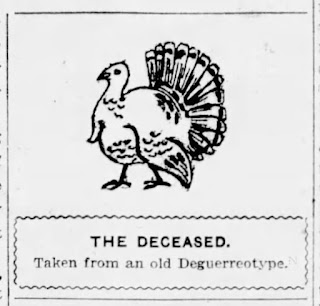 The Mail had four reporters and a staff artist on the scene before the remains were scraped off the walls. And they would have been on hand sooner had they had any inkling of what had happened.

In an exclusive interview Josh said: "It's nobody's damn business.”

Later, just before the Mail went to press, Mrs. Jones, who was given the third degree by the police, admitted that she had found the bird so tough that she put nitroglycerin in the dressing in the hope that it would assist the carver. Jones refused to be interviewed again.

Naturally, of course, some households prefer to take matters out of the turkey’s hands, uh, claws, and ruin the Thanksgiving themselves.  The “Greenwood Commonwealth,” November 23, 1956:

CAMDEN, N. J., Nov. 23--The way the police heard.it, Mrs. Asa Redrow decided she'd had enough husbandly advice on how to roast the Thanksgiving turkey.  She threw the bird at her husband. Redrow ducked. The turkey crashed through a kitchen window.

Redrow faced a hearing today on assault and battery charges. Mrs. Redrow said he struck her.

I hope all my readers in the U.S. have a happy Thanksgiving dinner.  Here at Strange Company HQ, we will be tucking into, not turkey, but a homemade nut loaf.