This week's Link Dump will be enhanced by some live music from the Strange Company HQ orchestra. 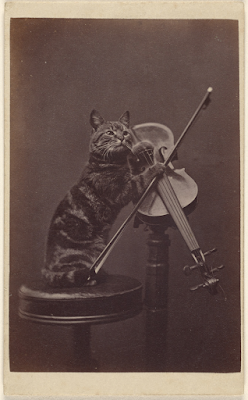 The internet helps solve the mystery of a 19th century botanist.

If you want to spend over $200 bucks for a cheese sandwich that looks like roadkill, be my guest.

Why it's not a good idea to eat a coelacanth.   Although I'll bet it's still better than that $200 sandwich.

Enjoy a selection of the world's worst poetry.

Some myths about Anne of Cleves.  You have to give credit to any woman who married Henry VIII and escaped with her life.

For years now, people have been arguing over the gender of a pigeon.

Why scientists killed Ming the Clam.

The life of French king Louis Philippe I.

Some people become addicted to travel.

This week in Russian Weird meets Doctor Chip.  And the time when Peter the Great put a tax on beards.

Mourning a wife who could fry a great piece of tripe.

If plants really do run the world, you'd think they'd do a better job of it.  On the other hand, maybe my pots of basil think everything is going just swimmingly.

The oldest man in the world to play bowls.

If you're a dowser looking for work, head to California.

A brief history of tobacco.

A look at the servants of the East India Company ships.

A coroner and a morgue keeper fight over a corpse.

The Battle of Beecher Island.

How not to behave when you're an American in Europe.

The adventurous life of a one-armed knight.

A bonobo who's a pretty good cook.

A mysterious cave house in England.

A haunted village of witches in Italy.

Curiosity rover discovered what may be signs of ancient life on Mars.

One of Los Angeles' most iconic homes.

The elopement of Mad Lord Adolphus.

A look at the F4U Corsair.

That's all for this week!  See you on Monday, when we'll look at a particularly creepy haunted house.  In the meantime, here's a bit of Flemish dance music.