The sponsor of this week's Link Dump demonstrates the general sentiment here at Strange Company HQ. 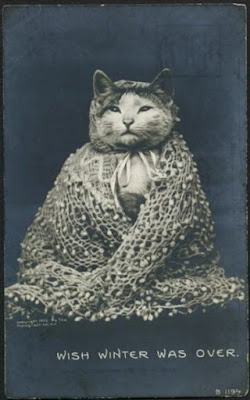 What the hell killed off dinosaurs?

People are still asking: what the hell was Oumuamua?

Watch out for those sea monsters!

Watch out for those sneezes!  (Yes, this is from the Thomas Morris blog, where every bodily function is a signal for doom.)

Be warned: they're unionizing.

A brief history of the UK census.

A tip of the hat leads to murder.

The adventures of a bogus Hapsburg.

The dangers of being a microbiologist.

It's pretty embarrassing when you enter a photo competition and you're beaten by an octopus.

The legend of a well-traveled Viking woman.

A massive newly-discovered cave in Canada.

An Atlantis in the far north.

How dental x-rays were used to read 17th century letters.

When a wake goes into "Weekend at Bernie's" territory.

Sharks that glow in the dark.

An island that will remind you of the joys of indoor plumbing.  (It's a nice place, but I can't imagine wanting to visit anywhere enough to make me willing to carry around a bag of human waste all day.)

The "lowest sort" in the 17th century print trade.

A portrait by Gainsborough.

The economic side of witchcraft.

The final hours of one of Hitler's warships.

This week in Russian Weird looks at Striped Siberia.  And what the hell was the Vitim Event?

The Milky Way may be a lively place.

A handy reminder that we live in the sort of world where Prince Philip is a god.

A real-life "Beauty and the Beast."

The expedition that inspired "King Kong."

An evening's entertainment at Astley's Amphitheatre, 1857.

The case of the fake heiress.

The man who petrified corpses.

When the U.S. Army had a Camel Corps.

The occult side of Lewis Carroll.

Witches and an unsolved disappearance.

Some weird things on Mars.

How Alan Shepard came to play golf on the moon.

The inferno at Campden House.

That's all for this week!  See you on Monday, when we'll see what happens when you serve a really bad glass of wine.  In the meantime, here's a traditional Welsh hymn: