The St. Scholastica Day Riot; Or, The Hazards of Serving Bad Wine

Major conflicts have often arisen from the most seemingly minor events.  (Long-time readers of this blog may recall when England and America nearly went to war over a murdered pig.)  However, proportionately speaking, it’s hard to top the time when Oxford, England, suffered street riots, bloody armed battles, and centuries of financial restitution, all because of a serving of lousy wine.

On February 10, 1355--St. Scholastica Day--Oxford University students Walter Spryngheuse and Roger de Chesterfield found themselves with free time on their hands.  They decided to celebrate the way students have done from time immemorial--namely, by going to the nearest pub for a little booze-up.  The pair headed for Swindlestock Tavern, and ordered wine.

Unfortunately, our students were not pleased with the beverage.  The wine was downright undrinkable, and they were not quiet about expressing their displeasure.  Their host, John de Croydon, was understandably nettled about these medieval one-star Yelp reviews.  He went over to the pair and bluntly told them to either drink their wine in silence or leave.  Walter and Roger declared that the wine was clearly spoiled, and demanded de Croydon serve them something better.  The taverner insisted that the students should just gulp down the stuff, and like it.

Spryngheuse replied by cracking de Croydon over the head with his wine pot.  After giving the taverner a thorough beating, our scholarly pair went on their way, feeling like they had given a much-needed tutorial about the house red.

What Walter and Roger appear to have overlooked was that the Swindlestock was owned by John de Beresford, Oxford’s mayor.  Beresford sent the town bailiffs over to the two students to demand an apology and financial compensation for the taverner’s injuries.  The pair told them in no uncertain terms what they could do with this request.

This refusal left Beresford in a bind.  He could not arrest his foes himself, as all members of the University were beyond his jurisdiction.  He wrote to the University’s Chancellor, John Charlton, asking him to apprehend the erring wine-bibbers.  Charlton’s refusal was nearly as rude as Walter and Roger’s had been.

Beresford decided it was time to go to war.  He had the bells of Carfax rung, which was the known call to arms for Oxford men.  The students responded by ringing the bells of St. Mary’s on the High Street, the corresponding summons for University members.  The most epic Town versus Gown in Oxford history was well and truly launched.

The two amateur armies spent an entire day brawling in the streets, with the townsmen getting the worst of it.  Beresford made an in-person appeal to King Edward III to come to his aid, but the king, who was known to be pro-University, declined to get involved.  Meanwhile, Chancellor Charlton, seeing that events were slipping out of his control, pleaded with the students to agree to a truce.  They responded by blocking the city gates, looting and burning buildings, and beating the hell out of anyone who dared cross them.  In return, bowmen attacked a group of students who were peacefully exercising in the fields off St. Giles church, killing several of them. 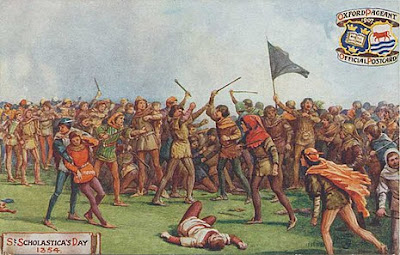 Bereford raised an army of some 2,000 men from the Oxfordshire countryside, all of them eager for a good fight.  Chanting, “Slay, slay!  Havoc, havoc! Smite fast, give good knocks!” they descended upon the students.  They had more men and better weapons than their foes, so Town was able to give Gown “good knocks,” indeed.  The students escaped to the sanctuary of the University, with the Oxfordshire men in hot pursuit, beating on the doors of the Colleges and shouting, “Bycheson cum forth!”--in modern parlance, “Come out, you sons of bitches!”  Fourteen University Halls were vandalized, and numerous students killed or thrown in prison.  By the third day of the riot, most students had fled Oxford, with the remaining survivors hiding in Merton College, which was under a state of siege.

On February 12, Charlton obtained his own audience with King Edward, with more success than Beresford.  The king ordered the violence to cease while he sent judges to the town to hear the complaints from both sides.  In the meantime, the charters of both Oxford and the University were revoked.  To no one’s real surprise, Edward ruled in favor of the University.  He returned their charter and issued a blanket pardon for all the students.

The town paid dearly for that afternoon in the Mayor’s tavern.  Beresford was imprisoned, and Oxford was ordered to make a formal apology to the University, along with monetary compensation and a fine of 500 marks.  In addition, the Bishop of Lincoln imposed a one-year interdict on the town, which banned all religious practices except the baptisms of newborns.  In 1355, King Edward issued a royal charter detailing the rights of the University over the town.  The University’s Chancellor was given the right to tax bread and drink sold in Oxford, as well as other authority over the town’s commerce.

Every year on St. Scholastica Day, the Mayor and sixty-one of Oxford’s leading citizens (one for each student killed in the riots) were forced to do penance by attending a Mass in St. Mary’s Church honoring the slain students and contributing a penny for each of their victims.  (The money was split between the University and the church’s curate.)  This humiliating practice lasted until 1825, but it was not until 1955 that a formal armistice was made, with the Chancellor being made a Freeman of the town, and the Mayor given an honorary degree.

All in all, you might say that Walter Spryngheuse and Roger de Chesterfield hold the record for the world’s most expensive bar tab.