Phantom cats and a mysterious death. Who can ask for more in an old newspaper story? The "Brooklyn Daily Eagle," March 13, 1886:


Ghost stories from the credulous and nervous gentlemen who draw salaries as guardians of the peace in the precinct covered from the Graham avenue station are becoming frequent. Last week they saw the ghost of an Italian. On Thursday night a brave officer sat watching the remains of Mrs. Maggie Madden, the woman who was found asphyxiated in her bed that morning in the rear of 895 Graham avenue, and whose husband is under arrest on a charge of having caused her death.

The officer's name is Carroll. He induced a man named James Davies to sit with him in the kitchen. The body was encased in an ice box and was in the front room. The officer asserts that while sitting near the stove quietly smoking, the front door was suddenly shut with a bang, and a moment later heavy footsteps were heard on the roof. When the officer went into the front room to investigate the matter, he saw, he says, the apparition of a colored man named Jackson, who had at one time been the husband of Mrs. Madden. The woman left him shortly before his death. On his death bed he said that she would soon follow him to the grave. The policeman lighted another lamp and placed it on the mantel in the room where the body lay. He then resumed his seat and Davies went out for a few moments. While sitting alone, the officer said, he was startled by a heavy knocking in the window and looking in the direction he said he again saw the grinning face of Jackson and heard the exclamation, "I have come back." The officer by this time was frightened and when Davies came back the two men opened all the doors and windows and began singing and stamping their feet. The officer positively asserts that he again saw Jackson's ghost two hours later and that a knocking was kept up until daylight. Tho neighbors share the nervousness of the police and claim to have seen the ghost of Mrs. Madden in the court yard shortly after dark last night.


The "Eagle" carried a follow-up on the following day: 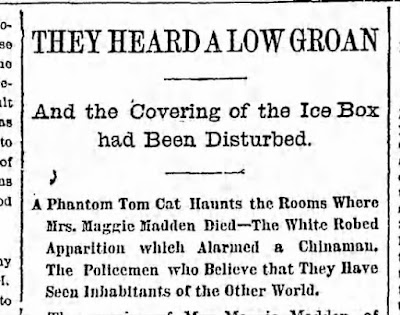 The remains of Mrs. Maggie Madden, of 395 Graham avenue, who was found asphyxiated on Thursday morning, and who is supposed to have been murdered by her husband, were interred in Calvary yesterday.

The undertaker who took charge of the funeral had received the assurance that Mrs. Madden's life had been insured, and that his bill would unquestionably be settled.

It is not easy to describe the excitement into which Officer Carroll's stories of ghostly appearances thrilled the neighborhood. Some little fuel was added to the fire last night when a daughter of Mrs. Diamond, who lives in the floor underneath that formerly occupied by Mrs. Madden, declared that as she entered the hall she was saluted with a shower of stones from tho vacant premises above. She screamed lustily for her mother, and was with difficulty reduced to a frame of mind not bordering on the hysterical.

A further contribution came in the shape of a story from a Chinaman who declared in Celestial English that a white robed apparition had hurried through the back room of his laundry, notwithstanding tho obstruction of carefully bolted shutters.

When the funeral cortege departed for the cemetery, yesterday afternoon, Policeman Sprague locked up tho rooms and took the key to the station house. It was supposed that Officer Carroll monopolized the distinction of having been alarmed by the phantoms, but it now appears that Sprague also had a terrifying experience. This officer's account of what occurred is blood curdling to the last degree.

He was left in charge of the apartments, in one of which laid the remains. He was cheered by the presence of two friends. The fingers of the clock pointed to the traditionally witching hour when a low groan came from the front room in which Mrs. Madden slept with the soundness of death. The watchers were much too frightened to investigate at first, but they finally mustered up the necessary courage. They solemnly declared that the black covering of the ice box had been disturbed and that they distinctly heard loud rappings on the mantel in the front room. Then the fire board began to vibrate in a manner at once mysterious and unaccountable, an alarming development which was followed by the extinguishing of the lamp, the three men rushing out without much regard to dignity. The neighborhood was aroused in very short order and one of Sprague's friends, as soon as he found sufficient composure to tell the tale, declared that he distinctly saw the ebony face of Jackson, who was Mrs. Madden's first husband.

All these startling occurrences were followed by the peculiar noises described in yesterday's Eagle and by the experiences of Officer Carroll, who succeeded Sprague as watchman. Carroll was not only honored with a visit from the departed Jackson, but had the pleasure of receiving a phantom tom cat which invariably disappeared when any overture, hostile or friendly, was made. The four men, including, of course, the guardians of the dead, are profoundly convinced that they have seen inhabitants of the other world, and the whole story needs nothing to complete it except the claim very generally made and conceded that the phantom tom cat represents an animal to which Jackson himself in his lifetime was tenderly attached, and which sufficiently appreciated its owner to depart this life within two weeks after the uneasy Jackson's death.

It was widely believed that Mr. Madden (whose first name was given as both Thomas and Patrick in the newspapers) had murdered his wife--a suspicion strengthened by his his contradictory and implausible testimony at her inquest. However, the coroner's jury could not decide whether his wife's fatal suffocation was accidental or not, and he was freed from police custody.

I do not know what became of this Brooklyn tenement filled with unhappy ghosts.
Posted by Undine at 4:41 AM