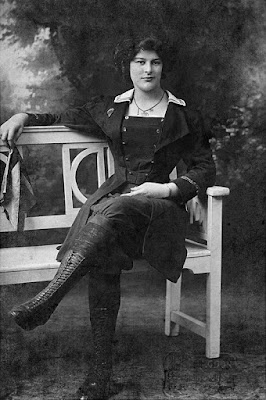 The youth of today--as youth always does--tends to exist in the present. Anything that happened before their time is considered alien, irrelevant, and inferior. Young people today imagine that the strong, confident, kick-ass women they see portrayed on TV or in movies are a modern innovation. Women of the "old days," they assume, were weak, inhibited, helpless.

Of course, anyone with the slightest knowledge of history knows otherwise. Every era, no matter how outwardly conventional and repressive, has had their share of daring, adventurous females who make a mark in their own individual fashion. Such women can emerge at the strangest times, and in the strangest ways.

That brings us to the subject of today's post: Meet Elizabeth "Dolly" Shepherd, a Victorian/Edwardian girl whose road to becoming a fearless, groundbreaking heroine began with a liking for the music of John Philip Sousa.

Shepherd was born in a small English town named Potters Bar on November 19, 1886. When she was 16, she longed to see Sousa and his famed band play at London's Alexandra Palace, but she lacked the money to buy a ticket. Shepherd got around this handicap by taking a waitressing job at the establishment. Instead of paying the Palace to hear Sousa's music, the Palace was paying her! One day on the job, she overheard the showman Samuel Franklin Cody lamenting the fact that he needed a stand-in for a part of his act which involved shooting an egg off a woman's head. (His wife, who normally fulfilled that role, was injured when one night, Cody's aim was just a little off.) Bored with waiting on tables and thirsting for excitement, Shepherd immediately volunteered for the job.

After, I presume, urging Cody to brush up on his marksmanship.

After a year of serving as Cody's assistant, Shepherd accompanied him to visit the workshop of French parachutist and balloonist Auguste Gaudron. Dolly was fascinated. So fascinated that by the end of her visit, she had left Cody's employ to become a parachutist. Gaudron gave the girl thirty minutes of training, took her up to 2000 feet in the air, pointed out a suitable landing place, and shouted, "Go!"

Shepherd later described what came next: "My heart rose into my mouth as I plummeted for what seemed far too long, dropping like a stone. I could hear the rapid flap-flap-flap of the silk streaming after me as the canopy broke from the balloon netting and sucked at the rush of air, and then at last there was a great whooooosh...Suspended there in the clear, warm air, high above the land of mere mortals, I experienced a sense of elation such as I had never known."

Skydiving is not a pastime for the timid, particularly in those early days. The modern safety harness had yet to be invented, and the parachute itself was a crude affair. Hanging below a small gas balloon was the canvas parachute and, on another cord, a trapeze bar for the parachutist to sit on during the ascent. When the balloon was fully inflated, it was released with the parachutist running underneath it, ready to be lifted off the ground. At the right altitude, the parachutist would pull a ripcord to begin the balloon’s deflation and jump off the trapeze bar, allowing the parachute to open. Everyone involved in the sport knew that every time you went up, there was the very strong possibility that you would not live to see another jump. Dolly wrote, "From time to time a member of our team might 'disappear.' Nothing would be said. He or she would just not be seen at any more shows, and if questioned, Captain Gaudron would merely say that the aeronaut in question had 'left the team.' They had left, sure enough!"

Dolly was unfazed by the risks. In her words, "death was a subject on which we did not dwell." Some people are terrified of risking their necks; others find it gives them an addictive adrenaline rush. Dolly was a perfect example of the latter. She took to parachuting as if she had been doing it her whole life. When she ran into trouble on her jumps, she did not panic. She sang to keep her nerves steady and used her brains to get herself out of the jam. She designed a special costume for her jumps, a jaunty blue outfit with gold trim, and by 1905, was regularly making public performances, cheerily waving a Union Jack to the crowds before making her jumps. The attractive, dashing, six-foot-tall Shepherd was an instant crowd-pleaser. She became the most renowned of the "Edwardian lady parachutists."

Shepherd had enough near-misses to make any insurance actuary weak in the knees. On one jump, both her balloon and the parachute failed, leaving her helplessly rising as high as 15,000 feet. She was very, very fortunate that, instead of being dashed to the ground, the balloon slowly sank back to the ground--after nearly four hours. Dolly enjoyed the experience. She later enthused to a reporter that the unplanned tour over England was "too beautiful to describe." On another jump, she almost landed on a steam train, but the driver had the wit to blow the steam, pushing her into a canal. Shepherd was unfazed. She once cheerfully said that she liked to "go high," because "I have it in my head that if I had to be killed, I'd like to be killed completely: good and proper!"

In July 1908, it was arranged that Dolly would do a double jump with another female parachutist, Louie May. The crowd was thrilled by the unusual sight, but their excitement quickly turned to horror. May's parachute failed to release. It looked like she was doomed. The spectators would have witnessed a gruesome tragedy if not for Shepherd's cool head and quick thinking. Shouting words of encouragement to her terrified companion, Dolly managed to release May from her harness, and told the other girl to hold on to her literally for dear life so they could both descend on Shepherd's parachute. Unfortunately, the parachute was not quite enough to handle two people, so they had a hard landing. May was not seriously hurt, but Shepherd suffered a severe back injury. Her legs were left paralyzed, and the doctors told her she would never walk again.

Shepherd refused to believe them. She found a physician who gave her back electrical shock treatments. Amazingly, this unconventional therapy realigned her vertebrae. Within a few weeks, Shepherd was back on her feet and planning her next jump. (As a side note, the failed jump with May landed Dolly a spot in the record books, for the first mid-air rescue.) It was only years later that Dolly learned that during her convalescence, her mother took her place in Gaudron's troupe under the name of "Madame Papillon."

This really must have been quite a family.

Only two months after her near-fatal crash, Shepherd made her comeback. She felt uncharacteristically nervous before the jump, but after a perfect landing, "I rose to my feet, happy to be a parachutist again." Shepherd was scheduled to make another jump in Coventry on July 9, 1910. However, at the last minute, Dolly canceled her appearance, and another female parachutist, Edith Maud Cook, took her place. Eerily enough, this was Cook's final jump. A sudden gust of wind caused her parachute to collapse. Cook was thrown onto a factory roof. She fell off the roof, causing injuries which led to her death five days later.

Cook's awful fate--only one of numerous high-profile deaths of female parachutists--intensified an already-raging debate: should women be allowed to parachute at all? One Edmund Pigott insisted that it was shameful to allow crowds to fulfill their worst instincts by watching young women risk their lives for entertainment. Caleb Hackney wrote a widely-read editorial pleading, "Can not public opinion perhaps supported by some exalted personage, put an end to parachute descents by females?" In reply, Dolly laughed, "What a dull world it would be if it were full of Reverend Pigotts and Caleb Hackneys!"

Shepherd continued parachuting until 1912, when, during one jump, she thought heard a voice warning her, "Don't come up again, or you'll be killed." Dolly may have been fearless, but she was nobody's fool. She didn't come up again.

Besides, she soon had a new field of adventure. When WWI broke out, Shepherd and her sister joined the Women's Volunteer Reserve, where she was assigned to drive a munitions truck for the War Department. In 1917, she volunteered to go to France as a driver/mechanic. The soldiers were dubious about having women performing such jobs, but the skill and hard work of Shepherd and her female colleagues soon won them respect. Among Shepherd's duties was chauffeuring a Captain Percy Sedgwick. Although he initially balked at being driven around by a woman, his feelings toward her turned to admiration, then to love. After the war, they were married.

Dolly's adventures were not quite over. She worked for the home front during WWII, earning commendations for her efforts. The Sedgwicks moved to the Isle of Wight, where Percy died in 1956. In 1963, Dolly moved to Eastbourne. In 1976, she was invited to join the Parachute Red Devils. She celebrated turning 90 by flying with the Red Devils on one of their air shows. She also co-authored a charming book about her venturesome life, "When the 'Chute Went Up."

Dolly Shepherd Sedgwick died in 1983. The Red Devils and the RAF Falcons sent representatives to her funeral, and a local paper warmly eulogized her as "one of the most intrepid, charming, and colourful characters ever to have lived in Eastbourne." Those words were surely not hyperbole. Dolly once said that she had led a "charmed life." If so, it was due less to mere luck and more to her own intelligence, bravery, and ability. Very few of us are so blessed.

In 1987, Dolly's 67-year-old daughter Molly paid a fitting tribute to her mother by making her very first parachute jump.