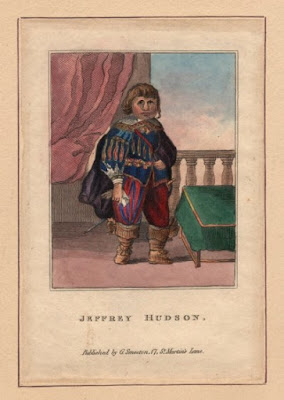 The course of our lives is often changed by the most unavoidable and unlikely quirks of fate. As an example, for one 17th century man, his entire life was literally determined by a matter of inches. It took him from what would otherwise have been an entirely ordinary, anonymous existence and brought him lasting fame, royal patronage, and adventure.

In the end, it's likely that he would have preferred the anonymity.

Jeffrey (or Jeffery) Hudson was born in 1619 in Oakham, Rutlandshire. As he grew up, something very unusual happened: namely, that he didn't grow. Although his parents and siblings were all of normal size, Jeffrey, although handsome and perfectly proportioned, was less than twenty inches tall when he reached adulthood.

His pixie-like stature unsurprisingly made him an object of humorous interest to everyone around him. One story--which is sickening to our modern sensibilities, but appeared to have 'em rolling in the aisles in those days--relates that when Jeffrey was a youth, some "pranksters" stole an elderly woman's cat, Rutterkin. They killed the cat, skinned it, and dressed Jeffrey in the pelt. One afternoon, as the woman was serving lunch to some guests, the costumed boy padded on four legs into the room. One of the guests asked if Rutterkin would like a bit of food.

"Rutterkin can help himself when he is hungry," Jeffrey replied. Panic ensued.

One hopes this story is apocryphal, but from what I know of the 17th century, I doubt it.

Hudson's father was keeper of "baiting bulls" for George Villiers, Duke of Buckingham, which is how the diminutive boy caught the attention of royalty. When Jeffrey was eight, his parents made a present of him to the Duke and Duchess. In those days, it was fashionable for the upper classes to keep human curiosities in their households, as walking, talking toys and objects of general amusement. Jeffrey's remarkable proportions, coupled with his native wit and intelligence, made him a particular prize. Jeffrey was treated as an honored member of the royal household, and given his own staff of servants. When Charles I and his queen Henrietta Maria visited the ducal estate, the Duchess used her pet human to devise an amusing surprise for the guests. At dinner, a large pie was brought to the table and set before the queen. And then out popped Jeffrey from inside the pie! Jeffrey made such a hit with the gathering, the Duchess immediately presented him to the queen as a gift.

Young Jeffrey soon became renowned as "Lord Minimus" and "The Queen's Dwarf." He was a pampered and well-liked member of the royal entourage, who featured in many court entertainments. In a typical skit, William Evans, the "court giant," would pull a large loaf of bread out of one pocket, and Jeffrey from another. The seven-footer would then make a "sandwich" out of Hudson and pretend to eat it. Jeffrey was a particular favorite with the court ladies. A contemporary wrote, "He could make married Men Cuckolds, without making them jealous, and mothers of Maids, without letting the World know they had any gallants." Many verses were written paying comic tribute to "Minimus," and he was a favorite subject of the court painters. Despite his size, Jeffrey learned to shoot, became a talented horseman, and took an active part in the usual court activities and entertainments. The queen raised him in her Roman Catholic religion. She eventually appointed him a "Captain of Horse." The title may have been merely an honorific one, but Hudson was very proud of it, and to the end of his days, insisted on styling himself as "Captain Jeffrey Hudson."

When Jeffrey was eleven, he was part of a mission sent to Paris to obtain a French midwife for Henrietta Maria. The French court was equally charmed with the tiny envoy's precocity and sophistication, and he was showered with gifts and praise. Unfortunately, the on the return trip, Jeffrey's ship was captured by pirates. He was imprisoned by them, but he was soon either released or he managed to escape. Sir William Davenant wrote a poem, "Jeffreidos," commemorating Hudson's maritime misadventure:


Each eye was now employed; no man could thinke
Of any uncouth nooke or narrow chinke,
But strait they sought him there; in holes not deep
But small, where slender maggots used to creep;
At last, they found him close, beneath a spick
And almost span-new-pewter-candlestick.
A sapient Diego, that had now command
Of ships and victorie, tooke him in hand;
Peis'd him twice, tasted his discourse; at length
Beleev'd that he dissembled wit, and strength:
Quoth he, 'Victors and vanquished, I bid
You all give eare to wisdom of Madrid.
This that appeares to you a walking-Thumbe
May prove, the general spie of Christendome.'

When the political situation in England deteriorated and Civil War drew near, Hudson remained utterly loyal to his benefactor, the queen. When Henrietta Maria fled to France in 1643, Jeffrey was among the small group of courtiers who followed her into exile. It was during this period in Paris that Hudson made the mistake that would send him spiraling into disaster.

As he grew older, Hudson became increasingly disgusted with being treated as a toy, the object of everyone's amusement. He may have had the body of an infant, but his mind and his soul were those of a grown man, and he wanted that acknowledged. One person who insisted on still treating him as a clown was the brother of William Crofts, another English exile. It is unrecorded what Mr. Crofts did to offend Hudson, but it was enough to make the "Queen's Dwarf"--who always had a hot temper--to challenge the man to a duel in October 1644.

Crofts--very unwisely, as he was soon to learn--took the entire affair as a gigantic joke. He arrived at the appointed place armed with only a large squirt gun. Hudson, enraged at this additional insult, instantly shot his opponent. Crofts literally died laughing.

However provoked he may have been, this rash act landed Hudson in very serious trouble. Dueling was outlawed in France, particularly when it ended fatally, and the dead man's brother held a powerful position in the queen's household. Hudson was imprisoned and sentenced to death. However, Henrietta Maria was able to get this decree commuted to permanent banishment from France. Hudson was alive and free, but he didn't have much else going for him. There were not many career opportunities in England for an ex-professional dwarf--particularly a Catholic Royalist one.

The rest of Hudson's life is poorly documented. It is said that after his return to England, he fought with distinction in the King's Cavalry. In 1649, he was on a ship that was captured by Barbary pirates (Hudson seems to have had little luck with sea voyages.) He was sold into slavery, where for about the next quarter-century he suffered brutal treatment at the hands of his captors. One oddity about this period is that while a slave, Hudson had a growth spurt that increased his height to 3'9". (Hudson attributed this increase in stature to the "buggery" he regularly endured during captivity.  Run this one past your family doctor and note the reaction.)

Hudson reappeared in England some time around 1668. It is not recorded how he escaped slavery, but it is presumed that he was among the Turkish captives ransomed by the English government. He lived in obscurity in Oakham for some years, living off a small pension granted to him by the Duke of Buckingham. He also received money from Charles II's Secret Service fund, an intriguing hint that Hudson may have been employed as some sort of secret agent or spy for the government. During this period, he gave an interview about his turbulent life to antiquarian James Wright, which is our chief source for biographical information about Hudson. In 1679, while visiting London for unknown reasons, Hudson, as a known "Roman Catholick," was arrested on suspicion of being involved with Titus Oates' notorious "Popish Plot." After about a year, he was released, and disappeared back into anonymity. Hudson died some two years later, and was given an unmarked grave in a local Catholic paupers' cemetery.

Email ThisBlogThis!Share to TwitterShare to FacebookShare to Pinterest
Labels: Charles I, Jeffrey Hudson