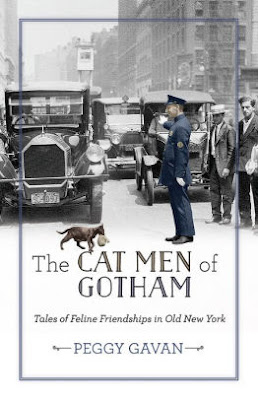 "Roses are red,
Violets are blue,
And my cat is, too."


Cats and weird little stories from the past.  What could be more Strange Company than that?  For this reason, I'm delighted to temporarily pass the blog's steering wheel over to Peggy Gavan, whose upcoming book, "The Cat Men of Gotham: Tales of Feline Friendships in Old New York" (Rutgers University Press, May 3, 2019,) is now available to pre-order at Amazon and Barnes & Noble.  The book features 42 profiles of New York men and the stray cats that they rescued off the streets of Manhattan and Brooklyn.  Some of the tales are sad, some are funny, some are just plain odd, and all of them offer a novel and wonderfully entertaining history of New York from a cat's-eye view.  (Side note: yours truly contributed a blurb.)

The following tale comes from the files of Gavan's blog, The Hatching Cat: True and Unusual Animal Tales of Old New York.  Meet the terrifying Miss Margaret Owen, a socialite who put the "Crazy" into "Cat Lady."


1922: The Curious Case of Lilly and Otto, the Dyed-Blue Cats of Midtown Manhattan

Every once and a while I come across an old animal story that goes into my special folder called “You Can’t Make This Stuff Up.” The following Old New York cat tale is somewhat funny, very bizarre, and a bit tragic. It most certainly belongs in my special folder.

Once upon a time, a young woman was obsessed with blue…

Miss Margaret Owen was a wealthy and temperamental young lady who loved the color blue (she said the color calmed her overwrought nerves). Everything she owned was blue—well, almost everything. The blue-eyed, petite singer had even performed in the chorus of “The Blue Kitten,” a musical comedy based on the book by Otto Harbach and William Cary Duncan, and directed by Arthur Hammerstein at New York’s Selwyn Theatre.

Although she was only 22 years old, Margaret had her own spacious apartment in a five-story building at 75 West 50th Street in midtown Manhattan. She also had a maid to do all her washing and cleaning, courtesy of her wealthy father, H.W. Owen, a former stock broker who had retired to Florida.

One day in January 1922, Margaret’s maid took some time off. That left Margaret alone with a pair of yellowing wool stockings that were driving her mad. She simply could have no peace until she did something with those stockings.

So, Margaret rolled up the sleeves of her blue smock and turned on the hot water faucet for the marble basin in her blue dressing room. She poured in a bottle of indigo and a few packets of Diamond-brand blue dye. Her new blue stockings were going to look so perfect with her pretty blue suit.

Everything was going fine until Lilly, one of Margaret’s two white Angora cats, came bounding into the room. When the curious, eight-month-old kitty dipped a white paw into the blue basin, Margaret clapped her hands in delight!

As it turns out, Margaret had recently bought blue leashes for her cats, because she had heard that women were walking their cats on the boardwalk in Atlantic City. She thought, wouldn’t it be romantic to be the mistress of a very beautiful blue cat that she could parade down the boardwalk? All she had to do was dunk her kitties, Lilly and Otto, in the blue water. Just like her stockings.

Margaret picked up little Lilly and dipped her in the bowl of blue water. Then it was Otto’s turn. Despite the cats’ howls, Lilly held them down in the water for about five minutes until she was sure the dye had taken. She took care not to immerse their heads—she used a piece of cotton dipped in the dye to swab their faces. (How very kind of her.) When she was all done, she wrapped the cats in an old blue towel and placed them on a blue cushion to dry.

Now, Margaret Owen was not the only person who rented an apartment at 75 West 50th Street. Hearing the cats’ howls and thinking that Margaret was killing them, several neighbors called the Humane Society. Apparently, no one responded to their calls for help that afternoon.

Over the next few days, things did not go well for poor Otto. Sensing something was wrong with the lackadaisical cat, Margaret took Otto to Dr. Harry K. Miller’s dog and cat hospital (aka, The New York Canine Infirmary), which was then located at 146 West 53rd Street. There, the blue Angora succumbed to an apparent poison in the dye.

Enter stage left, Harry Moran, Superintendent of New York’s Humane Society. Moran told Margaret he was taking her and Lilly to the West Side Magistrates Court, where she would appear before Magistrate Peter A. Hatting on charges of animal cruelty. Margaret put the blue cat in a blue silk bag and brought her to the court, where she was met by her attorney, Benedict A. Leerburger of the firm of House, Grossman & Vorhaus.

Magistrate Hatting ordered Margaret, Superintendent Moran, Mr. Leerburger, and the cat to all go to the Humane Society headquarters to have Lilly’s fur analyzed by a chemist. Pending the test results and Lilly’s status, the judge said, he would make his decision. (Margaret denied knowing anything about Otto, claiming that she had taken Otto to the animal hospital as a favor for a friend who had owned the cat.)

“If Miss Owens and Mr. Leerburger want any lunch, the Humane Society will supply them with it,” the judge reportedly said as he sent them on their way to have Lilly examined.

“What kind of lunch?” Mr. Leerburger asked the magistrate. “I can’t get along on a cat’s diet,” the attorney said. “I need more than milk for sustenance.”

Two veterinarians and a specialist on poison were called to assist with Lilly at the Humane Society (then located at 44 7th Avenue). They washed the cat and had the water analyzed. It turned out that the blue dye contained 5% arsenic.

Because Lilly had licked a lot of the dye off and become very sick, the magistrate said it was almost a case of fatal poisoning. Mrs. Anna Doyle, Margaret Owen’s probation officer, was convinced that Margaret had not intended to harm the cats. Lilly had survived the ordeal, so Mrs. Doyle asked the judge to go easy on Margaret.

“You’re a spoiled child,” the magistrate admonished Margaret during her sentencing. “What you need is a guardian. Are you married? No? Then I’ll send you back to your father until you get another guardian.”

In addition to remanding Margaret to her parents in Florida, Judge Hatting told her that the Humane Society would have custody of Lilly until her blue color had vanished.

Within days after Margaret appeared in court with Lilly, the story of the blue-dyed cat that had died from dyeing made all the major newspapers across the United States. Her story was also cabled to the Paris newspapers, where the idea of dying your pets to match your wardrobe was much appreciated
by the high-society Parisian women.

The Paris women were a little more intelligent, though. First, they thought it would be better to dye their dogs, since cats aren’t fond of parading about with their mistresses. They also discovered that coffee, caramel, or tea, when mixed with cream (and a little bit of quinine to discourage canine licking), made a great safe dye for their pets.

New York Humane Society Superintendent Moran was completely against this fad, and he reportedly prosecuted those who tried it in New York City. Even if coffee, tea, and caramel was used, he said, these were poisonous for animals, and thus, punishable under the law as a misdemeanor crime against animals.

I do not know what happened to Margaret Owen and Lilly. Hopefully they lived happily ever after in a blue house by the blue sea in Florida.

What I do know is that in 1930, Clarice Carleton Holland, the owner of Margaret’s apartment building, sold the building at 75 West 50th Street to William F. Beach, who in turn sold it the Underel Holding Corporation on behalf of John D. Rockefeller. By 1931 the holding corporation had acquired all the lots on the street, giving them the entire 50th Street frontage on which to construct Radio City Music Hall.

Incidentally, the animal hospital where Margaret Owen brought Otto and Lilly is still in operation as the Miller-Clark Animal Hospital in Mamaroneck, New York. Established in 1902 at 118 West 188th Street (according to old newspaper ads), it is one of the longest running veterinary practices in New York.