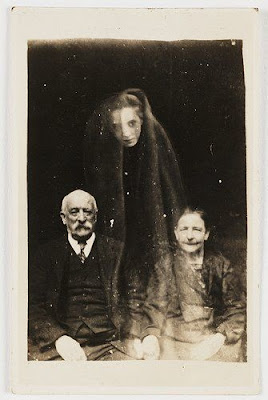 For those who assert there is such a thing as genuine poltergeist activity (as opposed to the skeptics who attribute it all to natural phenomena, over-imagination or hoaxes) the question becomes: "What is a poltergeist, anyway?" Believers fall into, roughly speaking, two different camps: some posit that polts are independent spirit beings--ghosts with a taste for nasty practical jokes. Others are of the opinion that what we are dealing with are manifestations unwittingly created by the troubled emotions of some member of the affected household--usually a child or teenager.

That debate will likely never be solved on this side of the grave. However, famed ghost researcher Harry Price recorded one English "poltergeist" case which strongly suggests that these "spirits" or "demons" are evidence of the awesome and little-understood power of our subconscious minds.

The story centers around the family of a Sutherland doctor named Wilkins. In 1940, Wilkins' 19-year-old daughter Olive became engaged to a young flight lieutenant in the RAF. Her parents were not in favor of the match. Although they had nothing against her beau, Dr. and Mrs. Wilkins felt Olive was too young for marriage. Even more seriously, the current war meant that odds were good their daughter might soon go from bride to widow. In the end, however, the course of true love ran smoothly and the young couple married in the fall of 1941.

The newlyweds settled in a rented flat near the Wilkins home, and Olive found work as a secretary. When her lieutenant was on duty, Olive spent much of her time with her parents. She had left many of her belongings in her old bedroom, so the Wilkinses must have often felt like Olive had never left home at all.

On February 26, 1942, Mrs. Wilkins borrowed a pin from her daughter's room. After being out for the day, Mrs. Wilkins came home and went back to Olive's room to return the pin. She was stunned to find the bedspread carefully turned down. She had not touched the bed all day, and she knew no one else had been in the house.

Three days later, Mrs. Wilkins was in the kitchen. She heard the front door open, followed by the unmistakable sound of Dr. Wilkins's footsteps, along with the clicking of her daughter's high heels. She was surprised to see only her husband enter the room.

"Where is Olive?" she asked.

"I don't know," he replied. Dr. Wilkins had come in alone, and had not heard the second pair of footsteps.

Four days after this, Mrs. Wilkins noticed that Olive's bed was mussed up, as if someone had been sleeping in it. A short time later, one of Olive's books had mysteriously been taken from the bookcase and left open on the windowsill. A week later, Mrs. Wilkins again heard the front door opening, followed by footsteps in the hallway. This time, she heard only one set of footsteps: Olive's. The steps went upstairs, and into Olive's room. Then, the steps went into the bathroom, where after a moment, Mrs. Wilkins heard the toilet flush. Then, there was silence. Mrs. Wilkins went upstairs, only to find no one there. When Dr. Wilkins came home, his wife told him her strange story. He went over to Olive's flat. She stated that she had not been to her parents' house all day.

The next few weeks saw two important events: Olive announced that she was pregnant, and her husband was posted overseas. As Olive's pregnancy advanced, so did the weird paranormal activity in her old home. Olive's former bed would not stay fixed. Mrs. Wilkins was constantly finding the bedclothes rumpled, or folded neatly down, or stripped from the bed altogether. Olive's dresser drawers were frequently found open, with the contents placed on the bed. It was now a regular event for Mrs. Wilkins to hear what she swore were the sounds of Olive opening the front door and walking up the stairs and into her old bedroom. When Mrs. Wilkins would go investigate, the footsteps immediately stopped. One day, Mrs. Wilkins arrived home to find that a photograph of Olive that was normally kept on the dining room mantelpiece had been placed on the table. Mrs. Wilkins, fearing this was some sort of bad omen, immediately called her daughter's workplace. She was told that Olive had unexpectedly gone into labor, and had been taken to the hospital.

Happily, Olive was safely delivered of a healthy girl, whom she named Enid. The baby's arrival simultaneously marked the end of the paranormal activity that had plagued the Wilkins home. The "poltergeist"--or whatever one cares to call it--was gone for good.

There was an obvious link between the Fortean events and Olive's marriage and pregnancy, but what did it all mean? Did Mrs. Wilkins' natural anxiety about her daughter, and desire to have her back home, cause her subconscious to create a "phantom Olive" who never married and left the family nest? Or were they manifested by Olive herself? Forced to deal with the combined stress of a husband in active service and her first pregnancy, did she secretly long for her more carefree unmarried life?

The Wilkins case is a perfect illustration of how "poltergeist activity" is virtually impossible to categorize, let alone understand.
Posted by Undine at 4:40 AM