The Curious End of M. Syveton 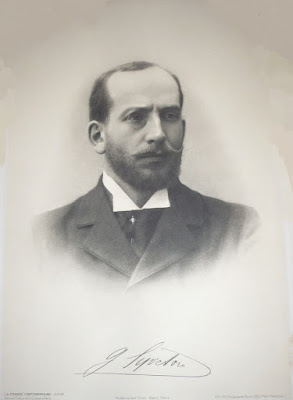 Gabriel Syveton (1864-1904) was one of the more controversial French politicians of his day. The co-founder of the Nationalist group Ligue de la Patrie Francaise was a hero to his allies and a nuisance to just about everyone else. Early in 1904, he got into a public altercation with the war minister Louis Andre over Andre's efforts to purge the army of officers considered to be disloyal to the Republic. The war minister had gone so far as to gather information on officers' religious practices and beliefs, reportedly with the help of the Masonic Grand Orient, which for some time had been keeping dossiers on this subject. Syveton had managed to acquire many of these files, which gave his party everything they needed to promote a full-fledged scandal with all the anti-Masonic trimmings. The uproar over the revelations forced Andre to resign. The anti-government atmosphere became so heated that on November 4, Syveton publicly slapped Andre on the floor of the Chamber of Deputies.

With this act, the triumphant Syveton went too far. This physical attack got Syveton suspended from parliament, and he was ordered to stand trial on December 9. The government was in a tricky position. If they failed to convict Syveton, it would support his charges against the government, and the Ministry would soon find themselves superseded by the Nationalists. But Syveton was a popular figure to much of the nation, and the idol of his party. Many saw him as a martyr, another Dreyfus. The smart money in Paris was betting on an acquittal.

Both publicly and privately, Syveton was unbowed. He showed great confidence that he would ultimately be exonerated, and threatened that he had even more shocking information to reveal. Unfortunately, we will never know if he was correct. For on the eve of his trial, he died.

At about 3 pm on the 8th, Syveton's wife Marie summoned a Dr. Thoimer, Gabriel's friend and doctor, to their home. The doctor found Syveton sprawled on the floor of his study, unconscious from the fumes of gas from the charcoal stove in the room. He died an hour later.

Madame Syveton's story was that during the day, her husband had numerous callers, the last of whom left at about 1 p.m. After not seeing or hearing anything from Syveton for two hours, she went to check on him, and found him dying in this gas-filled room.

However, it was immediately noted that there were several odd things about the death scene. For one thing, by the time the police arrived at the Syveton house, the gas taps were turned off. (Madame Syveton explained that she had automatically turned them off when she first entered the room.) For another, the door to the study was not locked from the inside. There was a freshly-filled pipe and a loaded gun lying near the body. Two friends of Syveton's did a little amateur sleuthing, and discovered that the pipe of the stove was plugged with a copy of that day's newspaper. This was no accidental death. But was it suicide or murder? 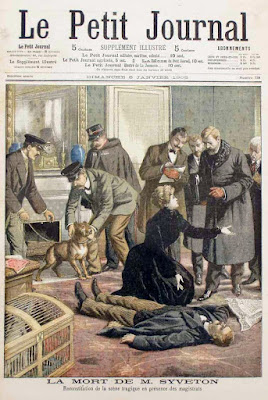 An autopsy ruled that Syveton had died of carbon monoxide poisoning, and the death was officially dismissed as a suicide. Despite his outward show of bravado, the police shrugged, he could not face the shame of standing trial, not to mention the permanent disgrace if he were to be convicted, so he took the easy way out.

This statement gained some credence when Marie Syveton, curiously eager to promote the idea that her husband killed himself, shared lurid details about the dead man's personal life. "On the morning of the day of my husband's death," she told authorities, "I discovered cause for leaving him. I mentioned the name of a woman, and he understood. He pleaded for forgiveness, saying that only my love could save him. I announced to him that I should insist on a separation. When I next saw him at 3 o'clock in his study he was dying."

It soon emerged that the woman Marie was referring to was her own daughter from a previous marriage, Marguerite Menard. According to some versions of the story, Syveton and his stepdaughter had been lovers. According to others, Syveton had raped the beautiful young woman. Whatever the truth about their relationship may have been, Marie Syveton made it clear that she believed the threat of his sordid behavior becoming public knowledge led Gabriel to end it all.

It did not seem to occur to Madame Syveton that in seeking to bolster the suicide theory, she was also suggesting an excellent motive for her to murder her husband. Some of the Paris newspapers went even further, alleging that she was part of a circle of wives of rich and important men who were insuring their husband's lives for large amounts of money, and then killing them. One of the inaugural victims, these papers declared, was Marie's first husband. The Widow Syveton, of course, angrily denied these reports--although she had to admit that both her husbands had been heavily insured.

The government, for their part, insisted that Syveton had committed suicide not merely because of his disgraceful personal life, but as a result of his professional chicaneries. They claimed that he had embezzled large sums of money entrusted to him by his party. Syveton's supporters heatedly denied these claims, proclaiming that "They have slain Syveton, and would now assassinate his character!"

The pro-Syveton party continued to insist that he had been murdered. To bolster their belief that Syveton had not committed suicide, they pointed to his blithe confidence in being exonerated. They asserted that Syveton's stepdaughter was of very dubious morals, and that she had simply invented the tale of being raped. It was surely suspicious, they noted, that Marguerite and her mother both claimed to have had "premonitions" of his death. There were experts who stated that Syveton could not have died in the room and in the position where he was found. And, of course, there was the fact that Syveton's life had been insured for 150,000 francs, all of which went to his wife.

Syveton's father and brother-in-law publicly accused Marie of murdering her husband, and demanded a second, more impartial investigation. Their pleas were refused, and Syveton's enigmatic end was allowed to fade into history.

So, was Gabriel Syveton's death suicide? A political assassination? A family murder? It says much about this strange case that equally solid arguments have been made for all of these theories.
Posted by Undine at 4:43 AM