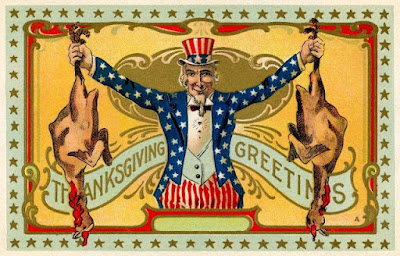 Welcome to Strange Company's annual celebration of our American holiday of Thanksgiving! If you are familiar with this blog, you already know what that means.


Bloomfield, N.J., Dec. 25--On his way home with a twenty-pound turkey Saturday night Harry Stanislaus sacrificed the bird to save himself from being bitten by a savage dog which attacked him near his home in Chapel street.

The dog leaped at the man's throat, but Mr. Stanislaus got out of the way, and then when it jumped again he used the turkey as a weapon and showered blow after blow on the animal, finally causing it to sneak away.

There was not enough left of the fowl, however, to make soup.


If there's one thing I've learned from writing this blog, it's that turkeys are a must for self-defense. The "Republican and Herald," December 2, 1912:


Richfield, N. J., Dec. 2. With a turkey as a weapon, John Moran, a farmland, kept a highwayman at bay and saved his wallet, containing $32.60, which he had received only a short time previous from his employer for his month's work. Moran was walking over a lonely stretch of road toward Paterson, and when he approached the railroad tracks the highwayman jumped out from behind a tree and demanded his money. Moran swung his turkey and landed on the fellow's head with such force as to knock him down. He then dropped the bird and pummeled the would-be thief with his fists and afterward he continued his journey without further molestation.


Bloomfield, N.J., Nov. 26--Moses De Witt, a colored man, whose home is in the Bowery district of this town, is now a firm believer in the luck attached to the number thirteen. On the thirteenth of the month De Witt bought a ticket for a raffle for a turkey. He paid thirteen cents for it and won the bird, which tipped the scales exactly at thirteen pounds. The number thirteen figured in the affair in other ways, too. On the way home, in passing the bridge over Second River at Henry st., he was stopped by two men, one of whom asked him the time. He informed him and was about to pass on when the fellows both attacked him and endeavored to take the watch away from him. De Witt was taken by surprise, but not so much as his assailants were when the old man suddenly gripped the turkey firmly by the legs and then laid about him right and left, using the bird as a weapon. The highwaymen took to their heels and the turkey graced the table at the De Witt home. "If anything, the use I made of the turkey," said De Witt, "only served to make it more tender."


James Cannon, fifty-eight years old, of No. 3 First St., Hoboken, and his wife, Ellen, eight years his junior, spent yesterday afternoon and last evening at Hoboken Police Headquarters because Mrs. Cannon did not cook a Thanksgiving turkey to suit the taste of her husband. The police say that when Cannon tried to carve the bird he first found fault because it was not properly basted, and then because the turkey was tough. Finally the husband, according to his wife, seized the cooked fowl by a leg and struck her over the head with it. Policemen Borrune and Kiely were called in and found the Thanksgiving dinner a wreck. The couple were arrested on a charge of being drunk and disorderly.


If Mrs. Cannon had only known to first use the bird to beat up highwaymen, all this trouble could have been averted. And curious, is it not, how New Jersey appears to be the Turkey Weapon Capital of the World?

Of course, using a turkey as a club does not always work very well for you or the bird. The "Philadelphia Times," November 28, 1884:


There was a clear space of the length of a man's arm and two turkey legs in front of Stephen Nash's crowded bar for ten minutes yesterday afternoon. At the end of that time the man with the arm and the turkey legs was put out. In the ten minutes he rapped the turkey legs repeatedly on the counter and made the glasses jingle. He also had something to complain of.

He spoke rapidly and his voice got thick toward the end of his speech. " I went to buy a turkey this morning, gentlemen," the man said, "and I won the turkey that belonged to these legs in a raffle. Then I thought I'd spend my turkey money for rum and unless I can pick up the fragments of that turkey on the road back to Frankford my family will have to dine on cranberry sauce." Here the turkey man mournfully dangled the trailing tendons of the mangled fowl in the olive dish.

"A man belted me," he continued, "in a Clearfield street saloon on the way home and when I whacked him with that proud bird of freedom the head and neck came off like a link of sausage and flew into the Tom and Jerry bowl.

"The bartender got unreasonable and wanted me lo pay for the Tom and Jerry. I refused and he became impudent. I swung that barnyard's pride at him and he dodged behind the cigar case. Gentlemen, the glass of that case sluffed off more than two pounds of white meat.

"Then we clinched and both wings of the bird disappeared in the scuffle. I saw the bartender through the door brushing pin-feathers off his cardigan jacket when I left. The wish bone was busted, too, and the turkey's lungs was hanging out of the place where his neck had been. I thought then that I'd better take the rest of the family's Thanksgiving home to 'em.

"A Fifth street car conductor said I couldn't bring the turkey aboard. We had a fencing match-- him with the car hook and me with the turkey. When we got through I asked him to let me take his coat home to roast for dinner, for all the turkey was on it but the Pope's nose and the legs. He wouldn't have it and I gave the Pope's nose to a blind beggar and here I am with the drumsticks."


And, of course, few things say, "Spirit of Thanksgiving" like getting into a shootout at a turkey raffle.

And, finally, considering what this holiday means to turkeys, it's always nice to see them get a bit of their own back. The "Los Angeles Herald," July 14, 1907:


Newmarket, N.J., July 13.— Justice Clarke T. Rogers, who makes a specialty of breeding big hogs and prize fowls, had a hair raising experience with a turkey yesterday. Rogers picked up a young turkey yesterday and, while he was fondling it, the mother turkey attacked him. The enraged bird flew at the judge's face, beating his head with its wings and pecking wildly away into his flesh. So unexpected and ferocious was the attack that Rogers felt to the ground unconscious. The cackles of the turkey brought Col. Downey, a. nephew, to the scene and he drove away the infuriated bird.

Yes, New Jersey again.  And no, I'm not going to ask why the judge was fondling a turkey.

Happy Thanksgiving!  And as for you Jerseyites, for the love of God, go vegetarian this year.
Posted by Undine at 4:33 AM